In light of the escalation in Jerusalem..Israeli warplanes bombard southern Gaza, and the anti-resistances are confronting

Al-Jazeera correspondent said that late on Monday night, Israeli warplanes targeted with a number of missiles a site of the Palestinian factions west of Khan Yunis in the southern Gaza Strip, while the resistance announced that it had responded to the raids. 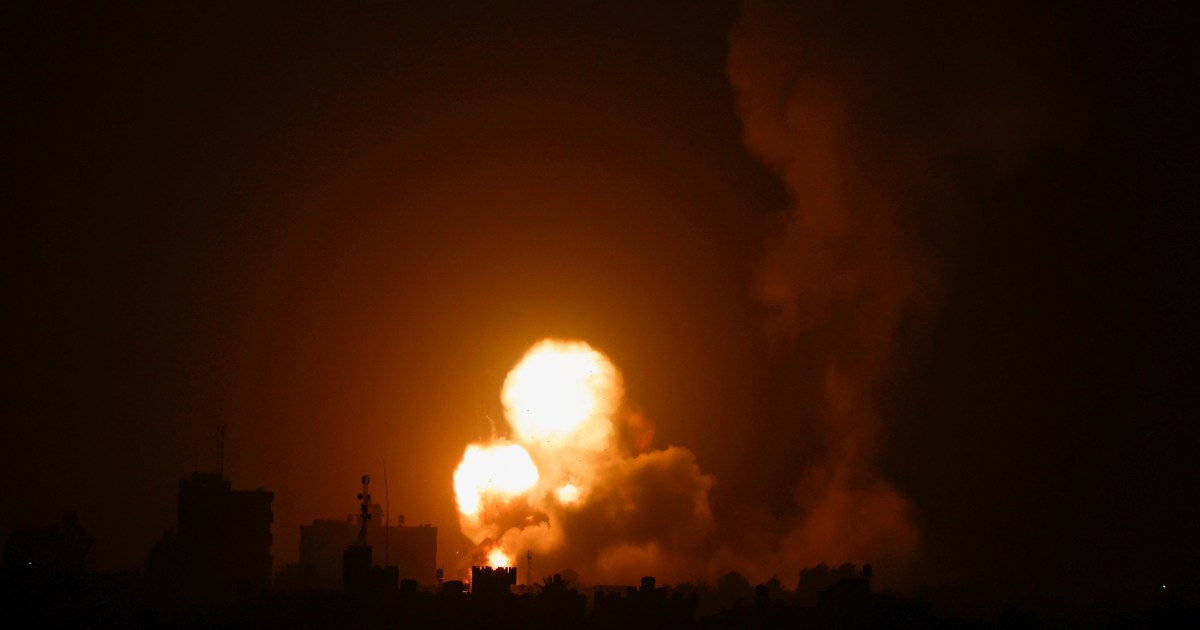 Al-Jazeera correspondent said that late on Monday night, Israeli warplanes targeted with a number of missiles a site of the Palestinian factions west of Khan Yunis in the southern Gaza Strip, while the resistance announced that it had responded to the raids.

This coincided with confrontations and arrests in the West Bank and diplomatic contacts to pressure to stop the Israeli escalation in Jerusalem and the West Bank.

The reporter added that the raids caused material damage to the target site and the surrounding lands, but no injuries were reported.

The reporter quoted eyewitnesses as saying that the anti-aircraft guns of the Palestinian factions fired at the fighters.

The Izz al-Din al-Qassam Brigades, the military arm of the Islamic Resistance Movement (Hamas), said that its air defenses repelled the Israeli warplanes over the Gaza Strip with a surface-to-air missile.

Earlier, the occupation army issued a statement saying that its fighter planes targeted a "workshop for the manufacture of weapons belonging to the Hamas movement."

Commenting on these raids, Hamas said that the Israeli army's bombing of resistance sites was a failed attempt to prevent the Palestinian people from defending the blessed Al-Aqsa Mosque.

Earlier, the Israeli army announced that the Iron Dome system had intercepted a missile fired from the Gaza Strip towards Israel, and that the warning sirens were activated in the Gaza envelope area.

He added that the details of the incident are under discussion, and the Israeli army also reported reports of hearing explosions in the Gaza envelope area.

The Israeli army announces that the Iron Dome system intercepted a shell fired towards Israel from the Gaza Strip and activates the sirens in the Gaza cover area..Details with Al-Jazeera correspondent Wael Al-Dahdouh #Al-Akhbar pic.twitter.com/UTfLpXF7Hh

In Jerusalem, Al-Jazeera correspondent said that the Israeli occupation forces withdrew from the courtyards of Al-Aqsa Mosque and reopened Al-Qibli Mosque, in conjunction with confrontations and arrests in the West Bank and diplomatic contacts to pressure to stop the Israeli escalation in Jerusalem and the West Bank.

On Monday morning, extremist settlers stormed the courtyards of Al-Aqsa Mosque, under heavy protection from the occupation police. Clashes erupted in Al-Aqsa Mosque between Palestinian youths and the occupation forces, which forced the Palestinians to evacuate the mosque, in preparation for the settlers’ storming through groups of about 40 settlers each.

In this context, thousands of ultra-Orthodox Jews participated in the "blessing of the priests" prayer in the courtyard of the Western Wall.

This happened amid strict security measures by the occupation authorities, which deployed reinforcements in the entire vicinity of the area, as well as at the entrances to the Old City of occupied Jerusalem, specifically the Mughrabi Gate, which leads to this area.

This prayer is considered one of the Jewish Passover prayers, and the second is tomorrow, Wednesday.

On Monday, diplomatic sources said that the UN Security Council will hold a closed session on Tuesday morning to discuss the escalation of tensions between Israel and the Palestinians in Jerusalem.

France, Ireland, China, Norway and the UAE requested that this meeting be held, while the Jordanian Foreign Ministry stated that the Kingdom of Jordan would host an emergency ministerial meeting on Thursday to confront the Israeli violations at Al-Aqsa.

In the reactions, the Emir of the State of Qatar, Sheikh Tamim bin Hamad Al Thani, received a phone call from Jordanian King Abdullah II, in which they reviewed the latest developments in occupied Palestine and the escalation at Al-Aqsa Mosque. isolation in the mosque.

For his part, Jordan's King Abdullah II called for stopping all measures, which he described as illegal and provocative, that violate the historical and legal status of the Temple Mount.

In this context, the Jordanian Royal Court said that Jordan's King Abdullah II stressed in a phone call to Abu Dhabi Crown Prince Sheikh Mohammed bin Zayed the need to continue making all efforts to stop the dangerous Israeli escalation in Jerusalem.

During a telephone conversation with the Jordanian monarch, President Abbas agreed to continue consultations and joint action on the international arena to stop what President Abbas described as "the Israeli brutal attacks on Al-Aqsa Mosque, and to stop the killing and abuse against the Palestinians."

In a phone call, Monday, with Egyptian President Abdel Fattah El-Sisi, the Jordanian king stressed the need to stop all illegal and provocative Israeli measures on the Temple Mount, according to what the Jordanian royal court said on its Twitter account.

Within the same contacts, Russian President Vladimir Putin affirmed Russia's firm position to support the rights of the Palestinian people, adding that Russia will continue to provide its political support to the Palestinian cause in all state forums.

In a telephone conversation with Palestinian President Mahmoud Abbas to discuss the latest developments on the Palestinian and international arenas, Putin stressed his rejection of Israeli practices that prevent worshipers from freely accessing Al-Aqsa Mosque, and the need to respect the existing historical status of Al-Aqsa Mosque and Jerusalem.

The US State Department said it was deeply concerned about what it described as the outbreak of violence in Jerusalem and the West Bank, and called on the parties to exercise restraint, and stressed that the Israeli and Palestinian authorities should take the necessary measures to calm the situation.

Also in the reactions, Palestinian Prime Minister Muhammad Shtayyeh said that Al-Aqsa Mosque is a place for Muslims only.

Shtayyeh added, in a speech during the weekly session at the government headquarters in Ramallah, that the repetition of what the occupation forces are doing against Al-Aqsa Mosque and the worshipers in it is a brutal act and amounts to a crime, as he described it, calling for the need to stop these practices in order to preserve the sanctity of the place.

In turn, the Islamic Resistance Movement (Hamas) confirmed that the Palestinian people had thwarted the fait accompli and attempts to divide the blessed Al-Aqsa Mosque.

The head of Hamas' political bureau, Ismail Haniyeh, also briefed Malaysian Foreign Minister Saif al-Din Abdullah on the latest developments in Al-Aqsa Mosque and the settlers' attempts to introduce sacrifices and slaughter them inside the mosque.

In a phone call, Haniyeh stressed the importance of rejecting the Arab and Islamic community and condemning what the Palestinian people and their sanctities are subjected to, which he described as crimes and dangerous practices.

For his part, the Malaysian Foreign Minister affirmed his country's rejection of normalization with the occupation, he said, expressing regret that some Arab foreign ministers met with Israeli Foreign Minister Yair Lapid recently.

In Tehran, Iranian President Ibrahim Raisi said that some countries' normalization of relations with Israel encouraged them and exacerbated their attacks on the Palestinians.

In a speech on the occasion of Iranian Army Day, Raisi stressed that if Israel takes any step against the Iranian people, Tehran will respond to it in the heart of Israel, as he put it.

The Old City of Hebron

In another development, the Israeli occupation forces tightened their military measures inside the Old City of Hebron in the southern West Bank, and closed a number of streets and entrances leading to the Ibrahimi Mosque, which is suspended for two days due to the Jewish Passover.

The Ministry of Islamic Endowments in Hebron said that the occupation authorities closed the campus permanently to Palestinians on Monday and Tuesday, prevented the call to prayer through loudspeakers, and allowed settlers to use the Muslim section to perform religious rituals and celebrate the holiday inside.

Hamas has called on the Palestinian people in the West Bank to mobilize to stop the violations of the occupation against the Ibrahimi Mosque, according to a press statement.

The movement stressed that the closing of the Ibrahimi Mosque in Hebron by the occupation authorities is a serious violation of the sanctities and a provocation to the feelings of Muslims.

Also in the West Bank, 4 Palestinians were wounded, and dozens of others suffocated, in raids carried out by the Israeli occupation forces at dawn and Monday morning.

Two young men were seriously and critically injured in the town of Al-Yamoun, west of Jenin in the northern West Bank, in confrontations that broke out with the occupation forces, which stormed the town and raided several houses there.

A number of Palestinians suffered from suffocation as a result of the occupation forces' suppression of protesters with tear gas and sound bombs, and two other Palestinians were wounded in the villages of Kafr Ein and Qarawat Bani Zeid, north of Ramallah.

The number of arrests carried out by the occupation forces in the West Bank on Sunday and early Monday reached 14.

The Palestinian Prisoners Club reported that the arrests were concentrated in the village of Husan, west of Bethlehem, and also included Palestinians from the villages of Kafr Ein and Qarawat Bani Zaid north of Ramallah and Yamoun west of Jenin. resistance to occupation.

In the same context, the Palestinian Ministry of Health said that a Palestinian woman died of wounds sustained by Israeli bullets last week in Jenin.