Attacks with rubber bullets and beatings.. the occupation forces storm the courtyards of Al-Aqsa Mosque and break up the gatherings of worshipers

The Israeli occupation forces closed the gates of the Old City of occupied Jerusalem, and required worshipers to leave their IDs upon entering, while recording attacks on some worshipers. 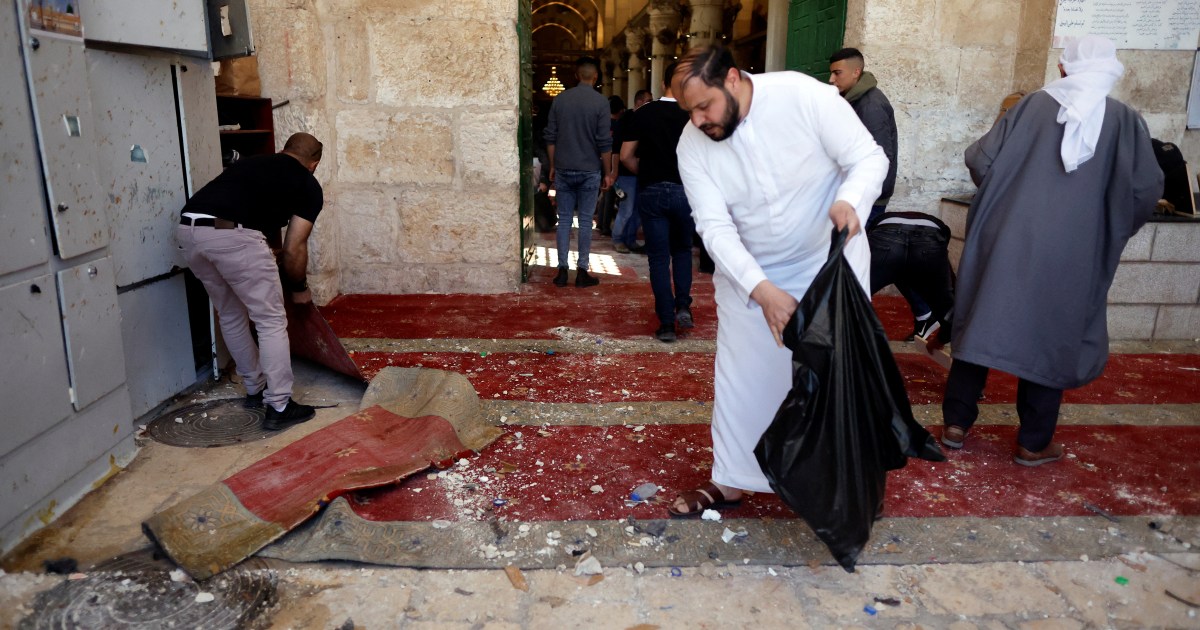 Sources confirmed to Al-Jazeera that the Israeli occupation forces stormed the courtyards of Al-Aqsa Mosque this morning, and began to disperse gatherings of Palestinians.

And the occupation forces took the initiative to close the gates of the Old City of Jerusalem, and required worshipers to leave their IDs upon entering.

Sources told Al-Jazeera that the occupation forces attacked worshipers at the Lions Gate, which resulted in two injuries, and prevented them from reaching the Al-Aqsa Mosque.

Anadolu Agency quoted eyewitnesses as saying that the Israeli police initially closed the gates of the Old City of occupied Jerusalem with iron barriers, and prevented all worshipers from outside the town from reaching Al-Aqsa Mosque to perform the dawn prayer.

However, witnesses said the police eased restrictions, allowing worshipers to enter while holding some ID cards at the mosque's gates.

And the Palestinian Red Crescent Society stated - on Sunday morning - that its crews provided treatment to two Palestinians, one of whom was injured by a rubber bullet, and the other was injured by being beaten by the Israeli police at the Lions Gate, one of the gates of Al-Aqsa Mosque.

The Israeli occupation police had conditionally released more than 80 Palestinians whom it had arrested at dawn on Friday inside the blessed Al-Aqsa Mosque.

The occupation stipulated that they be deported from Jerusalem and Al-Aqsa Mosque for a period of 15 days.

Yesterday evening, the occupation police released 330 detainees, while 30 prisoners will remain in detention until they are presented to investigation officers from the Israeli police.

Clashes erupted between Palestinians and the occupation forces in Jerusalem and the West Bank.

The Islamic Resistance Movement (Hamas) denied the existence of any truce with the Israeli occupation, and renewed its call on the Palestinians to continue their march and retreat in Al-Aqsa Mosque.

As for the Palestinian Foreign Ministry, it called on the international community to force the occupation to engage in a real peace process.

Local media published a video showing the moment the Israeli occupation forces arrested a Palestinian girl yesterday evening, during a sit-in in the city of Nazareth, inside the Green Line, in support of Al-Aqsa Mosque.

The girl appeared in the video arguing with the soldier for not following the legal procedures to arrest her, so he assaulted her with an electric taser that knocked her to the ground, while the rest of the soldiers tried to pin her down in order to arrest her amid screams from those around her.

According to Palestinian media, Nazareth witnessed confrontations between the youths and the Israeli police on Saturday evening.

Commenting on the recent developments, Israeli Defense Minister Benny Gantz said that the political solution with the Palestinians is based on two separate Israeli-Palestinian entities, while maintaining Israeli hegemony in the entire region.

In statements carried by the Israeli Broadcasting Corporation, he added that the political separation of the two entities must be paralleled by economic cooperation between them.

The Israeli minister considered that this solution guarantees the geographical contiguity of the Palestinian areas, through the establishment of transportation infrastructure.

He said that reaching peace in the broad sense is difficult, noting that he is trying to create a better reality that guarantees Israel to live in peace and tranquility.

Gantz stressed that he attaches great importance to the talks he is holding with Palestinian President Mahmoud Abbas, who opposes violence and directs Palestinian efforts to the political arena, according to him.