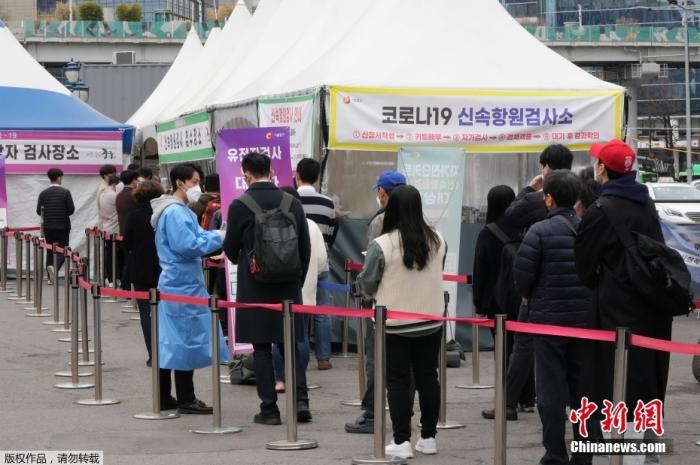 Why did this country, once known as the "model student of anti-epidemic", choose to lift most of the epidemic prevention measures when the new coronavirus Omicron variant continues to spread and the number of daily confirmed cases remains above 100,000?

And what is the price for South Korea to make such a choice?

A medical worker guides people waiting to be tested for the new coronavirus at a makeshift testing site in Seoul, South Korea, on March 17, local time.

On March 17, local time, a poster showing measures to prevent the new coronavirus in South Korea.

Under this circumstance, South Korean Prime Minister Kim Fuqian said when presiding over an epidemic prevention meeting on the 15th that the government decided to fully lift social distancing measures from the 18th.

At the same time, the South Korean government released the "Post-Omicron Response Plan", which aims to ensure that the epidemic prevention and medical system remain normal for a long time.

This is also the first time South Korea has officially announced the return of its medical system to normal after 2 years and 3 months of the outbreak.

——From April 18, the business hours of public gathering places, private gatherings, and large-scale events will be fully lifted.

——From April 25, the ban on eating and drinking in indoor public gathering places such as movie theaters and indoor sports facilities will be fully lifted.

——From late May, confirmed cases of the new crown will no longer be quarantined, and can see a doctor in person in any hospital and clinic.

——From June, those who have completed the whole process of vaccination against the new crown vaccine will be exempted from quarantine when entering South Korea, and the number of nucleic acid tests for entrants will be reduced to one.

However, the South Korean government has not lifted the obligation of the public to wear masks.

The South Korean government also stated that if a strong mutant appears in the future, South Korea will still re-implement entry restrictions, and if necessary, will restart social distancing and home treatment measures.

"Anti-epidemic model student" chooses to "lie down", but the price is a bit high

In February 2020, in the early stage of the outbreak of the new crown epidemic in South Korea, the number of new diagnoses increased exponentially.

After the South Korean government implemented strict epidemic prevention measures, the epidemic slowed down in March.

South Korea is also regarded by the international community as a "model student" who has performed well in the fight against the epidemic.

However, in March two years later, South Korea was once again involved in the "black vortex" of the epidemic, and the daily increase in confirmed cases once exceeded 600,000, ranking first in the world.

Since the beginning of this year, the cumulative number of confirmed new crowns in South Korea has exceeded 15 million, and the number of deaths is approaching 15,000.

On March 23, local time, in Seoul, South Korea, citizens were queuing for a new crown test.

The epidemic situation is still not objective, but why did South Korea gradually relax epidemic prevention and choose to "lie down"?

In this regard, South Korea's "Central Daily" said that there is a view that the lifting of social distancing measures in South Korea will reduce people's tension and lead to an increase in the level of danger.

Yonhap News Agency also expressed concern about this. The number of newly confirmed cases in a single day is still high, and the number of reinfection cases has increased, and the possibility of new mutants still exists.

In addition, more than 20% of confirmed cases belong to high-risk groups over the age of 60, which may lead to an increase in critically ill patients.

Earlier, Sun Yinglai, head of the social strategy team of the Central Emergency Response Headquarters in South Korea, once said that considering the low fatality rate of the Omicron variant, it is not necessary to further strengthen the epidemic prevention response.

However, the World Health Organization recently warned that lower numbers of cases and deaths do not necessarily mean "lower risk".

This week, the International Health Regulations Emergency Committee, which assesses the global state of the Covid-19 outbreak, unanimously agreed that Covid-19 remains a public health emergency of international concern.

WHO Director-General Tedros Adhanom Ghebreyesus emphasized that the new crown virus is still deadly, "now is far from the time to let our guard down, but to work harder to save lives."