Xi Jinping went to Hainan for inspection, these strategic events "must be seen outside Hainan"

Current Affairs News丨Xi Jinping went to Hainan for inspection, these strategic events "must be seen outside Hainan"   On April 11, when talking about the construction of the Tropical Rainforest National Park, General Secretary Xi Jinping said that we should look beyond Hainan to see this work, regard it as the "bigger of the country", and fully understand its strategic significance to the country 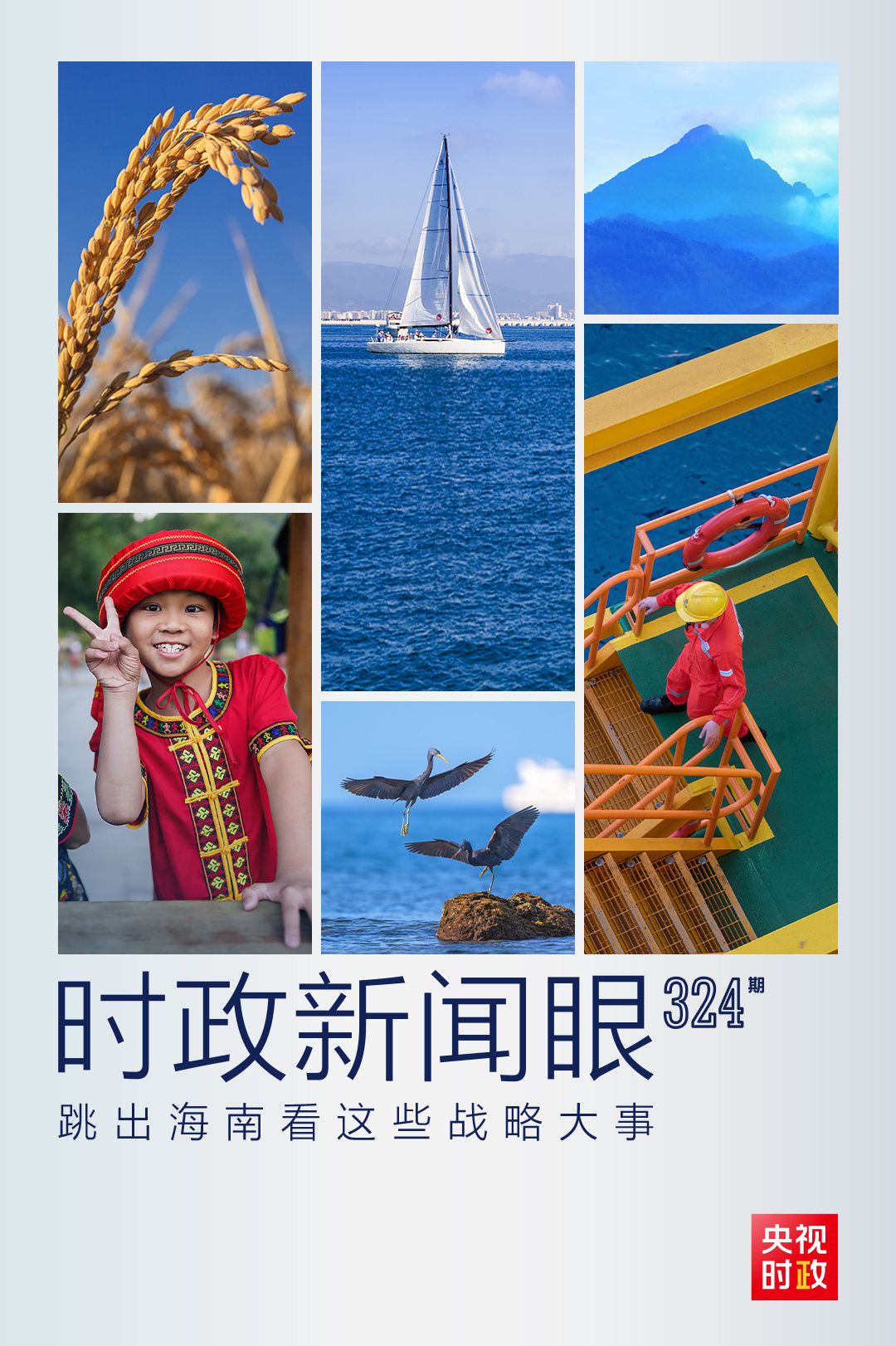 Current Affairs News丨Xi Jinping went to Hainan for inspection, these strategic events "must be seen outside Hainan"

On April 11, when talking about the construction of the Tropical Rainforest National Park, General Secretary Xi Jinping said that we should look beyond Hainan to see this work, regard it as the "bigger of the country", and fully understand its strategic significance to the country.

The visit to Hainan lasted for four days.

Wherever the general secretary goes, he pays attention to major events of strategic significance, and also has the characteristics of "seeing out of Hainan".

After a little bit of an island, it is related to the whole country.

△ Schematic diagram of the inspection site from April 10 to 13

Food security is the "bigger of the country", and seeds are the "chips" of agriculture.

my country is currently facing problems such as insufficient protection and utilization of germplasm resources, low level of breeding innovation, and low competitiveness of seed industry enterprises.

Just a few days before the departure of this inspection, the magazine "Seeking Truth" published the full text of the general secretary's speech at the 2020 Central Rural Work Conference.

In his speech, he admitted frankly, "So many years have been spent talking about soybeans and other seeds, but the breakthrough progress is still very unsatisfactory."

At the Scientist Symposium in September 2020, the general secretary also cited the example of "in agriculture, many seeds rely heavily on foreign countries".

△Yazhou Bay Seed Laboratory, comparative samples of corn, soybean and rice before and after improvement.

Hainan has high hopes because it is a breeding paradise.

A grain of millet in Hainan is linked to China's grain.

Four years ago, he went to Hainan for inspection. The general secretary came to the National Nanfan Scientific Research and Breeding Base and had a cordial conversation with academician Yuan Longping and other scientific researchers along the ridge.

He pointed out, "Improved seeds play a very crucial role in promoting grain production. We must be determined to develop my country's seed industry."

Breeding is to improve the existing seeds to make them more productive, better quality, more resistant to insects and droughts, etc., but this work takes a long time, is difficult, and has a high failure rate.

In the Yazhou Bay Seed Laboratory, the general secretary encouraged the scientific researchers to inherit and carry forward the excellent quality of the older generation of agricultural scientific research workers with the motherland in mind and serving the people.

Based on the "Southern Silicon Valley", with the motherland in mind, we have sharpened a sword in ten years, broke through the "stuck neck" technology, fought a good turnaround in the seed industry, and used Chinese seeds to ensure China's food security.

This is a national event that needs to be "looked out of Hainan".

Developing marine science and technology: marching towards the ocean

Hainan governs two-thirds of my country's ocean area, about 2 million square kilometers, and has a coastline of 1,823 kilometers.

The general secretary once pointed out that to build a marine power, we must vigorously develop marine high-tech.

In 2018, he visited the Institute of Deep Sea Science and Engineering of the Chinese Academy of Sciences in Sanya and the Qingdao National Laboratory for Marine Science and Technology in Qingdao.

On this trip to Hainan, the general secretary made a special trip to the Sanya Institute of Oceanography, Ocean University of China for inspection, always paying attention to the frontier development of marine science and technology.

This time at the Sanya Institute of Oceanography, the general secretary connected the "Deep Sea No. 1" operation platform.

He emphasized that we must promote high-level self-reliance and self-improvement in marine science and technology, strengthen original and leading scientific and technological research, firmly grasp equipment manufacturing in our own hands, strive to use our own equipment to develop oil and gas resources, increase energy self-sufficiency, and protect the country. energy security.

△ On the same day, the staff in front of the "Shenhai No. 1" operation platform connected with Xi Jinping via video.

When he inspected Hainan four years ago, the general secretary pointed out that the South China Sea is the best natural place to carry out deep-sea research and development and experiments. We must make good use of this advantageous resource, strengthen innovation and collaboration, speed up the building of deep-sea research and development bases, accelerate the development of deep-sea science and technology, and promote my country's marine science and technology have developed in an all-round way.

Xiang Haitu is strong, and Hainan is eager.

The development of marine science and technology, a strategic event, naturally needs to look beyond Hainan.

To explore the vast South China Sea in front of you is to serve the motherland behind you.

△ "Shenhai No. 1" is the first 1,500-meter deep-water gas field in my country that is independently explored and developed.

There are five first batch of national parks in China, one of which is located on Hainan Island.

When he inspected Hainan four years ago, General Secretary Xi Jinping proposed that Hainan should actively carry out the pilot project of the national park system and build national parks such as tropical rain forests.

(Photographed by Zhong Huaxia, a reporter from the head office)

During the inspection, the general secretary emphasized that Hainan is a province based on ecology, and the construction of Hainan Tropical Rainforest National Park is the top priority.

(Photographed by Zhong Huaxia, a reporter from the head office)

On the 30th of last month, the general secretary pointed out when participating in the voluntary tree-planting activity in the capital that forests are reservoirs, money banks, and grain banks, and now a "carbon bank" should be added.

This time in Hainan, the general secretary talked about the "carbon pool" again.

He said that the Tropical Rainforest National Park is a national treasure, a reservoir, a grain depot, a money bank, and a carbon bank. It is necessary to fully understand its strategic significance to the country and work hard to bear fruitful results.

As a "national treasure" Tropical Rainforest National Park, jumping out of Hainan can better see its strategic significance.

The date of April 13 has unusual significance for Hainan.

On this day 34 years ago, Hainan was officially approved as a province and a special economic zone.

On this day four years ago, General Secretary Xi Jinping solemnly announced at the meeting celebrating the 30th anniversary of Hainan's establishment of a province and a special economic zone, that the Party Central Committee has decided to support the establishment of a free trade pilot zone across the island of Hainan, and support Hainan's gradual exploration and steady advancement of a free trade port with Chinese characteristics. building.

On April 13 this year, the last day of the inspection, the general secretary put forward new requirements for Hainan to promote the construction of a free trade port.

He pointed out that it is necessary to speed up the construction of a free trade port with Chinese characteristics with world influence, and make Hainan a demonstration of China's reform and opening up in the new era.

Hainan is the first to build a free trade port with Chinese characteristics.

In recent years, the general secretary has personally planned, deployed and promoted it personally.

During this inspection, the general secretary emphasized the "three unswerving": we must adhere to the unshakable leadership of the party, consciously stand in the overall situation of the party and the country to think about problems and do things, and always adhere to the correct political direction.

We must persist in safeguarding national security, strengthen the identification and prevention of major risks, coordinate reform, development and stability, and insist on establishing first and then breaking, and not breaking without standing.

In the early days of Hainan's establishment of a province and a special economic zone, there was a feat of "100,000 talents crossing the Strait".

Today, strengthening the construction of cadres and talents is also an important task to look beyond Hainan.

During the inspection of Mauna Village, General Secretary Xi Jinping pointed out that the key to promoting the comprehensive revitalization of the countryside depends on people.

It is necessary to build a team of rural revitalization cadres with strong political skills, excellent skills and excellent work style.

In the Xiaochantan port area of ​​Yangpu International Container Terminal, the general secretary specifically talked about the group of temporary cadres, emphasizing that the active role of temporary cadres should be played, so that they can grow their talents at the grass-roots level.

△ This is the field operators and representatives of temporary cadres in Xiaochantan port area that day.

When inspecting Hainan four years ago, the general secretary pointed out that the special economic zone is at the forefront of reform and opening up, and has higher requirements for comprehensively strengthening the party's leadership and party building.

During this inspection, the general secretary emphasized that we must adhere to the main tone of strictness, deepen the comprehensive and strict governance of the party, and promote the party's construction in all aspects under the leadership of the party's political construction.

He put forward clear requirements for consolidating and expanding the achievements of party history learning and education, strengthening the education and training of cadres, consolidating the grass-roots foundation, and maintaining the high-pressure situation of anti-corruption.

In the square of Mauna Village, the general secretary said affectionately that the party has no interests of its own, and the leading cadres of the party should not have their own self-interest. People have a good life.

These remarks are not only for the audience, but also for the whole country.

△ During his inspection, Xi Jinping pointed out that red resources such as the Hainan Qiongya Column Memorial Site and the Red Detachment of Women Memorial Park should be used well.

This time, Wang Baihe, who was visited by Xi Jinping in Mauna Village, his father Wang Changlong once participated in the Qiongya column.

This is a related memorial of Wang Bo and his family that has been preserved to this day.

The supremacy of the people is the manifesto of the Chinese Communists throughout the century.

One after another, they are all "big men of the country".

To do a good job of these important events of strategic significance, to maintain a stable and healthy economic environment, a social environment of national prosperity, and a clean political environment, is to take practical actions to welcome the victory of the 20th National Congress of the Communist Party of China.