400 dirhams fine for driving slowly on the fast track

The Traffic and Patrols Department in the General Department of Central Operations in Ras Al Khaimah Police said that driving vehicles on fast tracks slowly is an infringement on the rights of other drivers, and may lead some to overtaking the wrong way, explaining that the penalty is a fine of 400 dirhams. 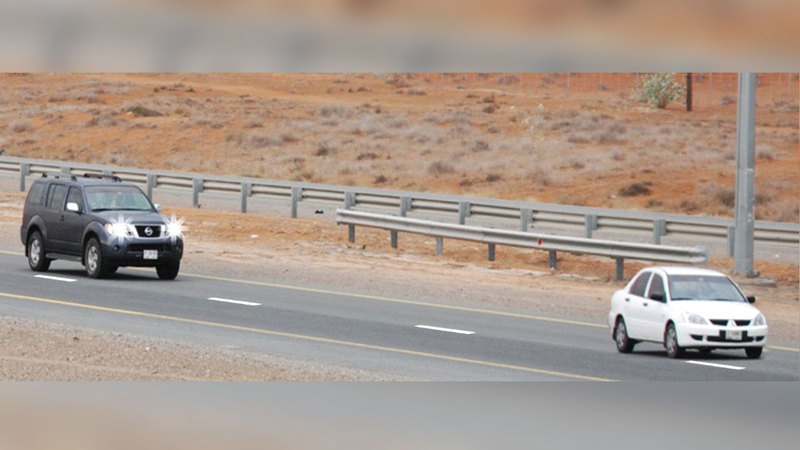 400 dirhams fine for driving slowly on the fast track

Driving slowly on the fast lane may result in dangerous accidents.

The Traffic and Patrols Department of the General Department of Central Operations in Ras Al Khaimah Police said that driving vehicles on fast tracks slowly is an infringement on the rights of other drivers, and may lead some to overtaking the wrong way, indicating that the penalty is a fine of 400 dirhams.

She added that some drivers believe that slow driving or at speeds less than the speed limit on the road guarantees a safe and calm journey for themselves and others on various roads and axes, but the opposite is true, as it may cause fatal accidents.

The Acting Director of the Traffic and Patrols Department in Ras Al Khaimah Police, Lt. Col. Dr. Muhammad Abdullah Al-Bahar, stated that Article (84) of the Federal Traffic and Traffic Law stipulates that not giving way to vehicles that have the priority of the road coming from behind or from the left side, a violation will be issued against them. Traffic and a fine of 400 dirhams, indicating that this behavior may be considered by some as simple, but it is an explicit violation, and its consequences may be dire for traffic and traffic safety, because it obstructs traffic and creates a state of confusion on the road.

He explained that there is a percentage of traffic accidents that occur as a result of driving the vehicle at a speed less than the speed set on the road, as the driver of a vehicle drives slowly unjustifiably on the left side of the road, and does not give way to other vehicles, obstructing the flow of traffic, which in turn leads to Some vehicles overtaking from the right side wrongly, causing serious traffic accidents.

Al-Bahar called on drivers of vehicles on internal and external roads to adhere to safe driving, and not to overtake and overtake vehicles traveling in front of them from the right, due to the great danger that overtaking on the right poses, and causes painful traffic accidents, and may result in deaths and serious injuries. The road is necessary to pay attention and adhere to the lane, and not to change it to other lanes except after making sure that the road lane is clear, and moving after making sure that there is a sufficient safety distance between them and other vehicles, with the need to adhere to the use of traffic lights while changing lanes, in order to preserve the safety of lives and property.