Controversy around the sale of a mythical Maradona jersey

The auction of the legendary jersey that Diego Maradona wore when he crucified England at the 1986 Football World Cup already has a taste of controversy: one of the virtuoso's daughters... 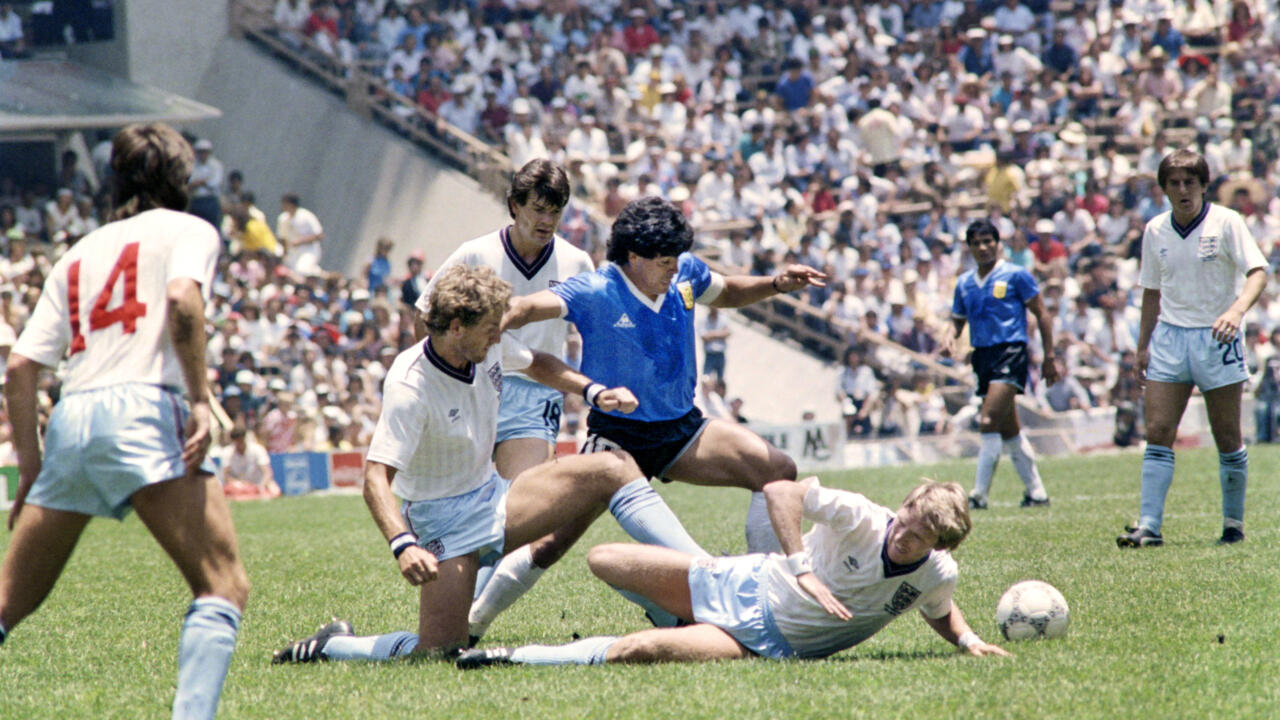 "It's not the one. I can't reveal who has it", but "it's not that man", Dalma Maradona told the Argentine press, alluding to the former England midfielder Steve Hodge, supposed to be the owner of this blue tunic bearing the number 10 since the Pibe de Oro had offered it to him after the famous quarter-final in Mexico City.

According to Maradona's daughter, one of two he had with his wife Claudia Villafane out of a total of five recognized children, the jersey owned by Hodge and offered for sale by Sotheby's is actually that of the first half of the quarter-final played by Argentina against England in Mexico City on June 22, 1986.

But the Argentine genius, who died of a heart attack in Buenos Aires on November 25, 2020 at the age of 60, changed his outfit at half-time and wore another shirt when he scored his two legendary goals. , one with the help of the hand - "the hand of God", had said Maradona -, the other, "the goal of the century", scored four minutes later after an incredible ride between the English defenders.

The jersey worn by the Argentinian Diego Maradona, during the victory, 2-1 against England in the quarter-finals of the World Cup, June 22, 1986 in Mexico, will be auctioned on the internet (from April 20 to May 4) by Sotheby's - Sotheby's/AFP/Archives

According to Dalma Maradona, it was his father himself who confided the secret to him: "How am I going to give him the jersey of my life?", he would have said to him.

“We want to clarify this so that people who want to buy it know the truth,” added Dalma Maradona on Wednesday evening on the Canal 13 television channel.

The stakes are high for Sotheby's, which has set the bar very high, estimating the piece between 4 and 6 million pounds (between 5.2 and 7.8 million dollars), with a starting price of 4 million pounds, just shy of the 2019 record ($5.6 million) set at auction for a jersey by American baseball legend Babe Ruth.

The sale will take place online from April 20 to May 4.

Argentinian Diego Maradona scored his second goal in the 2-1 victory over England in the quarter-finals of the World Cup on June 22, 1986 in Mexico STAFF AFP / Archives

The auction house immediately counter-attacked Thursday, saying it was sure of its move, with supporting expertise.

"No one ever said it wasn't the right jersey," a Sotheby's spokeswoman told AFP in an email, recalling that the T-shirt has always been presented as such, in particular by the National Football Museum in Manchester to whom Steve Hodge had loaned it for display.

The former English midfielder recounts the episode in his autobiography, entitled "The Man with Maradona's shirt", situating the exchange in the corridor leading to the locker room after the match.

For his part, Maradona tells a similar story in his book, "Touched by dog" ("My truth", according to the French edition): "On the way to the locker room, one of the guys from the English team - who turned out to be Hodge, but I wasn't sure at the time - asked me to swap shirts with him. I said yes and we did."

The Argentine adds that in a second step, "a few other English players came into the dressing room to exchange shirts and someone gave them some of mine"

On its website, Sotheby's also highlights a guarantee provided by the company Resolution Photomatching, which specializes in the authentication of sports jerseys using images.

According to a letter from founder John Robinson, the shirt "has been conclusively associated with the exact moment of the 'Hand of God' goal, and analysis of the image confirmed that Maradona did not change shirts between both goals.

These are in particular details on the patch of the Argentine Football Federation (AFA) embroidered on the shirt which would allow to affirm it.

The jersey worn by the Argentinian Diego Maradona, during the victory, 2-1 against England in the quarter-finals of the World Cup, June 22, 1986 in Mexico, will be auctioned on the internet (from April 20 to May 4) by Sotheby's - Sotheby's/AFP/Archives

The controversy is not a first for the world of auctions and collectors, where authenticity is a guarantee of value.

And it has already touched the sector of legendary football shirts.

In October 2018, a Parisian auction company, Coutau-Bégarie, had to withdraw a few days from sale a jersey presented like the one worn by Zinedine Zidane during the 1998 World Cup final won by France against Brazil, thanks to two goals from its conductor, due to doubts about its authenticity.