Álvaro Falcó and Isabelle Junot get married in Plasencia, surrounded by fortunes of several generations

Isabelle Junot and Álvaro Falcó are already husband and wife. The couple got married this morning in the chapel of the Palacio de los Marqueses de Mirabel, in Plasencia, accompanied by... 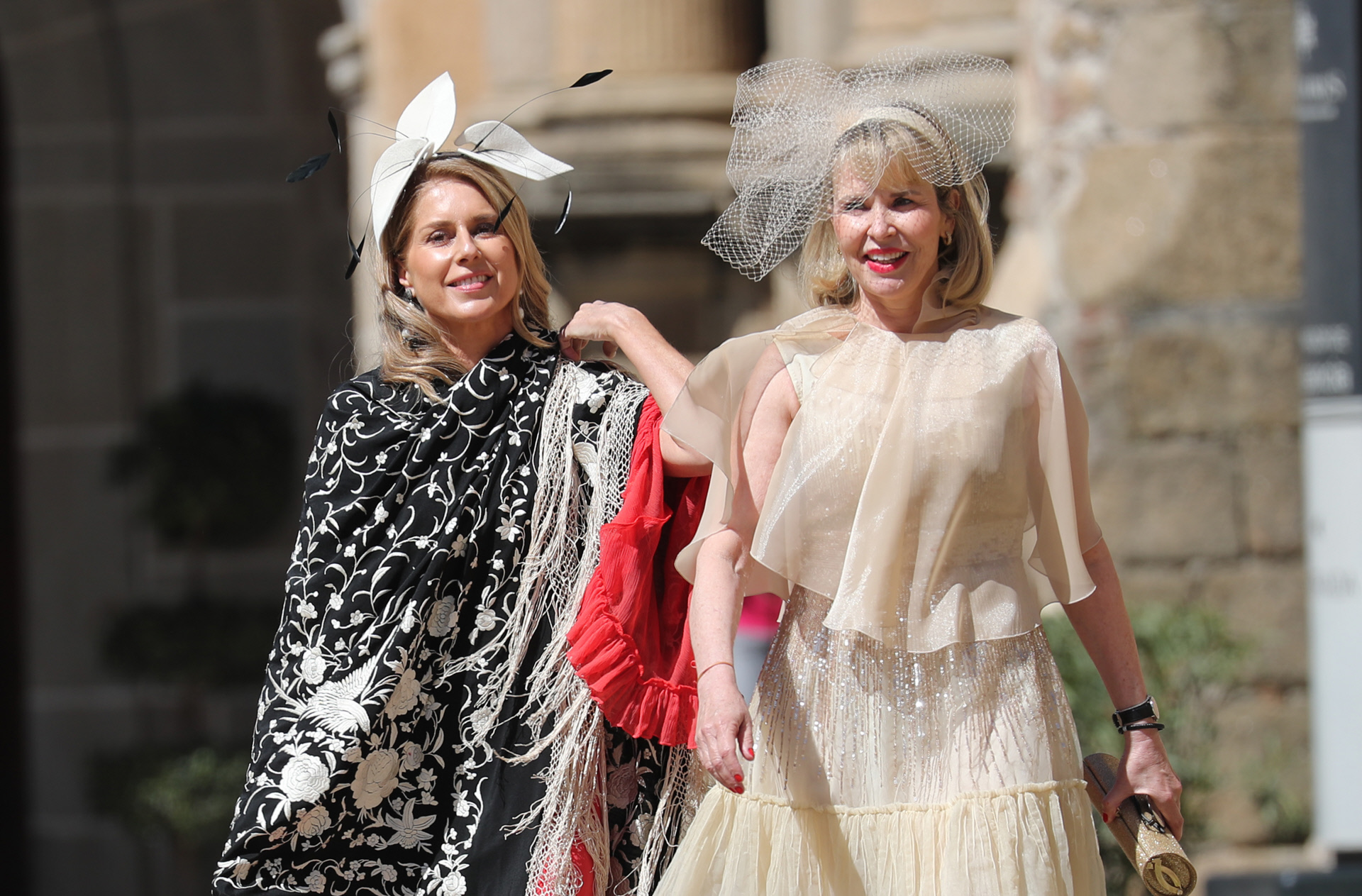 are already husband and wife.

The couple got married this morning in the chapel of the Palacio de los Marqueses de Mirabel, in

The daughter of Philippe Junot and Nina Wendelboe-Larsen and the Marquis of Cubas, son of Fernando Falcó and Marta Chávarri, have chosen this 15th-century family palace for their wedding, where weddings and other family events are already a tradition.

The initial idea was to say 'yes I do' in the Plasencia cathedral, where the groom's parents were married 40 years ago, but it has not been possible, since the temple is preparing an exhibition.

Isabelle wanted a Spanish firm to make her wedding dress;

and the chosen one was Pronovias.

The design is princess cut with a square neckline, made of gazar and silk and a train of more than two meters.

As for the jewellery, the young woman has worn earrings from the Rabat firm and a diamond crown, the same one that Xandra Falcó, Marchioness of Mirabel, the groom's cousin, wore at her wedding with Jaime Carvajal Hoyos (who died suddenly in September of 2020).

The groom, for his part, chose a black and gray morning suit from Pugil Store.

, relatives and closest friends, were summoned at one in the afternoon to the

held in the palace chapel, due to its capacity, while the

were summoned an hour later for the

person in charge of it has been the chef Mario Sandoval

, who has based himself on the taste of the bride and groom, very involved in their choice.

As Sandoval himself explained, lunch began with a cocktail of "twenty special bites", followed by a first course, fish, meat and dessert.

"We have created high-quality creative gastronomy, which is what we have been commissioned to do. It is a wedding with a lot of 'feeling', a lot of passion and a lot of desire for it to turn out very well," he said, not forgetting to highlight the "spectacular acorn-fed ham " and the wedding cake, "very special, evokes France, Denmark and Spain".

The event was going to bring together some of the greatest fortunes in Spain and bring together two generations of great businessmen, because the 'puppies' have already grown up and already know how to successfully manage large companies and even create their own and succeed with them.

Not everyone was seen.

The Parador de Plasencia and the Mirabel Palace are connected, and there were those who passed from one to the other inside.

In the early afternoon, the public, who expected to see the bride and groom already converted into husband and wife, left disappointed.

Neither at the entrance nor at the exit did they make an appearance.

Possibly, for some exclusive.

, was not seen, although she was one of the first to arrive at the Parador the day before.

In the link, she, the godmother, wore a headdress from the firm Solideo.

Both at the party and at the ceremony, Chávarri will coincide with who is already his father-in-law,

Both were related in the 90s after meeting at that time at the Marbella jet parties.

The new president of Inditex

Those who were seen to arrive was

, just the day after the daughter of Amancio Ortega took office as president of Inditex.

Marta chose a dress with a honeycomb bodice and an flared skirt in a boiler tone accompanied by a light blue cape-coat, complemented by gloves in the same tone as the dress, mules with crystals and a mini-size Kelly bag from Hermés.

arrived by car at the very door of the palace, while one of the most anticipated,

, the groom's cousin, the only girl among the witnesses on the groom's side, had not been seen in Plasencia until moment.

Yes, her partner could be seen, Íñigo Onieva, who arrived in the city of Cáceres in jeans with the suitcase and the suit for the wedding sheathed and in hand.

, the groom's aunt, wearing a coral dress and a black and white Manila shawl, and

and the Sevillian businessman

, a friend of the groom,

arrived at the palace together , as did

with their respective wives,

, Raphael's children, did not want to miss the appointment, as did their mother,

The singer has not been able to attend because he has tested positive for covid 19.

The public's ovation went to Antonio Romero and Rafael Ruiz,

, who, in addition to being among the guests at the wedding, were in charge of entertaining the pre-wedding party held the night before.

"Eager to make a mess. His father was a close friend of ours, we have known the groom since he was a child, and we are very happy with this wedding," they commented.

In addition, the bride and groom had hired a DJ, so the post-wedding party promised them long and lively.

Other guests at the link have been

Isabelle and Álvaro met at the Swiss Gstaad station five years ago, but it was not until she moved to Madrid that they resumed contact through mutual friends, encounters that led to a courtship and now a wedding.

In some public appearances, Philippe Junot's daughter commented on her boyfriend that he is "great, very funny and generous, he has a great sense of humor and self-confidence. We complete each other".

He, for his part, stands out from his already wife "his naturalness of him, how positive he is and his sense of humor".

Isabelle left her Dramatic Arts studies to dedicate herself to nutritional coaching, while Álvaro works in a digital marketing company and has just entered the startup sector.

HealthRaphael announces that he has Covid: "Fortunately, I feel fine"

The law of the street The crazy fauna of Bali Hai, Studio 54 on the Gran Vía: "People took pills and ghb, an evil liquid"

MONACOPrincess Charlene returns to Monaco and her recovery "is on track"