From "a blank piece of paper" to "city of the future", when did Xiongan appear "majestic"? 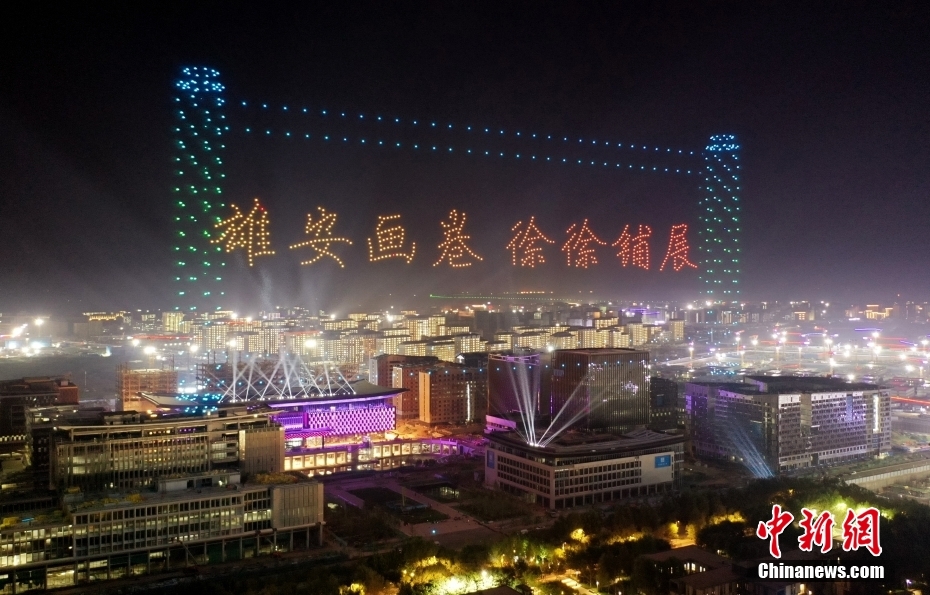 China News Agency, Xiong'an, April 1st, question: From "a blank piece of paper" to "the city of the future", when did Xiongan's "majestic appearance" first appear?

From "a blank piece of paper" to "city of the future", when did Xiongan appear "majestic"?

The Xiong'an New District, which has been established for five years and is "showing its prototype and showing its image", has made the answer to this question of concern at home and abroad more and more clear.

Data map: In the early morning of July 1, 2021, thousands of drones in Xiong'an New District, Hebei staged a light show, arranging various characters and patterns to "light up" the Xiongan night sky.

The picture scroll of the new district slowly spreads out, and the "city of the future" rises from the ground

On April 1, 2017, the media released the news that the Central Committee of the Communist Party of China and the State Council decided to establish the Xiong'an New District in Hebei.

This is another new area of ​​national significance after Shenzhen Special Economic Zone and Shanghai Pudong New Area.

Hu Jun, a 32-year-old passenger on duty at Xiongan Station of the Beijing-Xiong Intercity Railway, learned the news from a phone call from a friend.

Since then, he has "had a yearning" to work in Xiongan.

Hu Jun still remembers the first time he came here before the opening of Xiongan Station in early November 2020: "At that time, there was still construction around, and the station was so big that I couldn't see the whole picture for a while."

On December 27, 2020, the Beijing-Xiong Intercity Railway connecting the Chinese capital Beijing and Xiongan was put into operation, and Xiongan Station, which is about the size of 66 football fields, was put into use.

Hu Jun said that so far, Xiongan Station has transported more than 900,000 passengers to and from the station, which has played an important role in relieving Beijing's non-capital functions and promoting the coordinated development of Beijing, Tianjin and Hebei.

Three months after the announcement of the establishment of the Xiong'an New Area, Zhao Zhuo came here for the first time because he "wanted to come and have a look".

It's been two years since I started working again.

He recalled that the place where he was working at that time was a crop field, "now it has been constructed and has taken shape".

As the chief engineer of the second tender section of the Xiong'an Business Service Center project, what Zhao Wei said of "having an appearance and showing a prototype" clearly means something.

Standing next to the "Eye of Time" where the Internet celebrity punched in, looking north, the convention and exhibition center with the vermilion wall has been put into use.

"A few kilometers to the south, it will be the future CBD of Xiongan New Area."

On both sides of the "Eye of Time", "Millennium Plan" and "City of the Future" are engraved.

Zhao Chuan said that the Xiongan Business Service Center, which has a business hotel, business office building, expert apartment and other service supporting functions, has completed a number of projects, which can provide initial office locations for enterprises that undertake non-capital functions in Beijing.

At this time, the Xiongan New Area has entered the stage of large-scale construction and the simultaneous promotion of Beijing's non-capital functions.

On the occasion of the fifth anniversary of the establishment of the Xiong'an New Area, the local key projects in the second quarter of 2022 will be held.

Previously, Zhao Wei had compared the project's start and construction photos with the current scene, and "felt very surprised."

Especially in the relocated residential areas, "before there were tower cranes, now there are thousands of lights."

Data map: On October 25, 2021, aerial photography of the resettlement housing project in the Rongdong area of ​​Xiongan.

At the end of 2021, the first centralized built-up area in Xiongan New Area will welcome the first batch of relocated residents. Both Meng Zhensheng and his son moved to their new homes.

This is also the first time for the 85-year-old to live in a building, and he said with a smile that "the sense of gain is very strong".

This is a three-bedroom, two-hall house of about 100 square meters. The decoration of "House of Housewarming" hangs at the door, and there are many pots of green plants in the house.

On the balcony, the great-grandson who is going to attend a bilingual kindergarten nearby this year is playing.

This is a ten-story building.

Such heights are more common in newly built houses.

There is a children's playground in the community, and the lawn is not far from the unit door.

With a total area of ​​about 26,200 mu, Xiongan Country Park is equivalent to five New York Central Parks, and it is one of the "nine areas" in the "one lake, three belts, nine areas, and multiple corridors" ecological pattern of Xiongan New Area.

Since the park opened last year, it has become a good place for local residents to relax.

The interweaving of blue and green and the integration of water and city are the ecological background of Xiongan New Area.

Baiyangdian is to Xiongan as the West Lake is to Hangzhou.

Today, Qi Ming is in charge of the scientific research and inspection of wild animal and plant resources in Baiyangdian, especially the dynamic monitoring of wild bird resources.

The data shows that Baiyangdian has achieved from Class V to Class IV and partial Class III since 2019, and the whole lake will reach Class III in 2021.

On the rippling water, wild reed stalks and papyrus swayed in the wind, and dozens of bone-top chickens frolic here.

In the distance, flocks of ribbed ducks and crested ducks feed together.

In the sky, a group of wild cormorants suddenly flew by... This is the scene of the Fuhe Estuary Wetland on the west side of Zaojuan Lake in Baiyangdian in a spring day.

Qi Ming said that before the establishment of the Xiongan New Area, a total of 206 species of wild birds were recorded in Baiyangdian, and 230 species of birds have been observed so far.

In the eyes of this photographer who has been monitoring wild bird resources for 18 years, wild birds are the "barometer" of local ecology, and the number of wild birds can directly reflect the ecological advantages and disadvantages of a place.