His Highness Sheikh Hamdan bin Mohammed bin Rashid Al Maktoum, Crown Prince of Dubai and Chairman of the Executive Council of the Emirate of Dubai, issued Council Resolution No. (13) of 2022 regulating the use of bicycles in the Emirate of Dubai, with the aim of contributing to transforming the emirate into a bicycle-friendly city, and encouraging the use of bicycles as a means 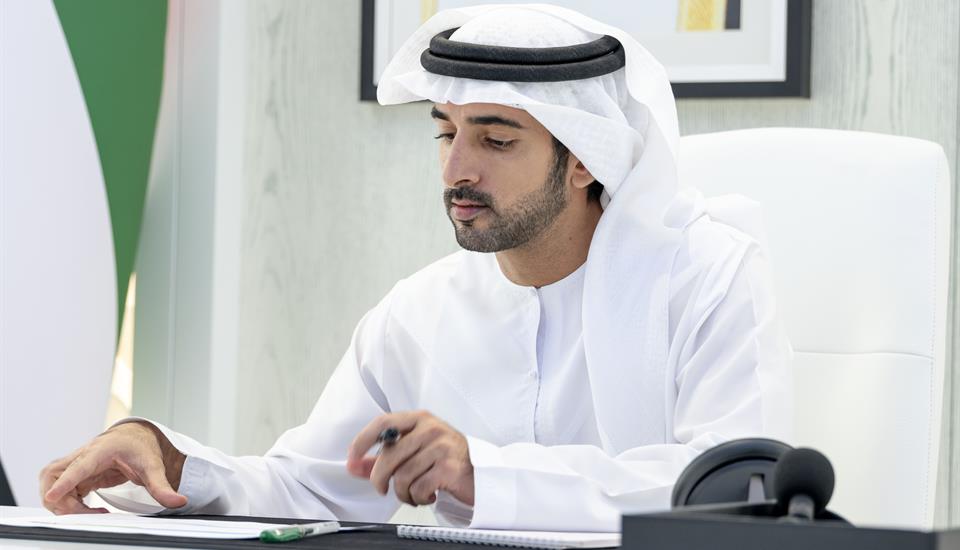 His Highness Sheikh Hamdan bin Mohammed bin Rashid Al Maktoum, Crown Prince of Dubai and Chairman of the Executive Council of the Emirate of Dubai, issued Council Resolution No. (13) of 2022 regulating the use of bicycles in the Emirate of Dubai, with the aim of contributing to transforming the emirate into a bicycle-friendly city, and encouraging the use of bicycles as a means To move people and transport goods, and regulate the use of bicycles in the emirate, in addition to preserving the environment, and contributing to reducing traffic congestion on the roads, by encouraging the use of alternative means of transportation to public transportation and vehicles for short distances, in a manner that serves to enhance the public health of the community.

Mattar Al Tayer, Director-General and Chairman of the Board of Executive Directors of the Dubai Roads and Transport Authority, said: "The decision is a translation of the vision of His Highness Sheikh Mohammed bin Rashid Al Maktoum, Vice President and Prime Minister of the UAE and Ruler of Dubai, may God protect him, to raise the level of quality of life in the city, and to transform towards solutions. Sustainable transport, and the promotion of the physical health of members of society through the use of bicycles of all kinds as a light, sporty and environmentally friendly means of transportation. The decision also comes within the framework of the directives of His Highness Sheikh Hamdan bin Mohammed bin Rashid Al Maktoum, Crown Prince of Dubai and Chairman of the Executive Council, to transform Dubai into a bicycle-friendly city. By working on developing laws and the legislative system, applying international best practices in infrastructure development to match the use of this sporty and environmentally safe method, and applying the latest relevant safety and security requirements.

Al Tayer added: "Thanks to the vision of its wise leadership and advanced and sustainable planning, Dubai has become the model city for future cities, by encouraging practices that take into account the environment and the health of the community, and serve to enhance the concepts of sustainability, as the use of bicycles is one of the manifestations of urbanization and awareness of the importance of following a healthy sustainable model of life, and Dubai continues to complete The cycling system by developing the infrastructure and regulatory frameworks according to the best international standards.

His Excellency explained that the Roads and Transport Authority is working within a comprehensive plan to develop bicycle paths with the aim of linking all vital areas in the emirate. , which contributed to encouraging residents and visitors to practice cycling, and to use it as an alternative and sustainable means of transportation.

The authority’s competencies and the

resolution stipulates that the Roads and Transport Authority in Dubai will undertake a number of tasks and powers, including: approving the requirements, standards and manuals for establishing, maintaining, and defining lanes, placing directional signs indicating them, and setting instructions that cyclists must abide by while riding bicycles on those tracks. Determine the maximum speed on it based on the nature of the path.

The decision stipulates that the Roads and Transport Authority in Dubai will set the requirements and controls necessary for training and training to drive bicycles, and coordinate with the Dubai Police and the relevant government agencies, including the authorities supervising special development areas and free zones, including the Dubai International Financial Center, in each Regarding the regulation of the use of bicycles, including the designation of lanes within the areas under their supervision.

decision specified the technical requirements that must be met by the bicycle, including: a white main lamp in the front, a red lamp and a red reflector in the rear, an acoustic warning device installed on the steering wheel, and brakes on the front and rear tires. It

is valid to travel on the road or path specified

by the authority, and that the size of the bike is commensurate with the size of its driver and any other technical requirements determined by a decision issued by the director general of the authority.

Obligations of the motorcyclist

The decision stipulated the necessity not to drive a bicycle or an electric bike on a road whose speed exceeds 60 km per hour, and not to ride a bicycle on tracks designated for walking and running. And avoid any actions that may endanger the life and safety of the cyclist or others, such as driving while holding the vehicle or trailer, driving without holding the steering wheel, or holding the steering wheel with one hand, unless this is due to the issuance of a hand signal, or zigzag riding.

The obligations of the bike rider, in accordance with the decision, included adherence to the security and safety requirements approved by the Roads and Transport Authority in Dubai, and when riding a bike, including wearing a reflective jacket and a protective helmet on the head, and not carrying any passenger on a bicycle or electric, unless it was The bicycle is equipped for this, and the rider is in compliance with the security and safety requirements approved by the authority. The decision also obligates the cyclist to leave a sufficient safety distance between him and other vehicles and pedestrians, and to stop the bicycle in the parking spaces designated for bicycles, if any, and not to leave it in a way that constitutes an obstacle to pedestrians, the use of vehicles or parking spaces. the public.

The decision stipulates the necessity of notifying the cyclist of any accident that he causes or is exposed to, and that results in injuries or material damage, on the phone numbers assigned to the police, ambulance or the authority, unless it is proven that he is unable to do so, and always use the right side of the road when riding a bicycle Or an electric bike, making sure that the road is clear, issuing a hand signal when changing a lane of traffic, walking in the direction of traffic always and not vice versa, adhering to the lanes, ensuring the safety of speed gears, brakes and tires, and using fixed or intermittent lighting in accordance with the regulations specified in this regard by the authority Not to allow the bicycle to be towed with any vehicle, or any objects to be towed on the bicycle, nor to introduce fundamental additions or changes to

the bicycle, in addition to any other obligations to be determined by a decision of the Director General of the Authority in this regard.

Obligations of the authority supervising the training In

accordance with the decision, the authority supervising the training collectively, in which the number of riders is four or more, must comply with the following: the conditions of approval issued to it by the Roads and Transport Authority in Dubai, and notify each of the authority, the Dubai Police, and the Dubai Sports Council, And the Emirates Cycling Federation and the Dubai Corporation for Ambulance Services, with all the details related to protection vehicles, and training drivers of protection vehicles on the driving programs specified by the authority, in coordination with the Emirates Cycling Federation, and leaving a distance of at least 15 meters between the protection vehicle and the riders in the event of riding a bicycle At low speeds of not more than 30 kilometers per hour, providing a safe parking distance, and filming the training collectively by a surveillance camera installed on the back of the protection vehicle.

According to the Resolution, it is prohibited to drive a bicycle in violation of the conditions, requirements and controls stipulated in this Resolution and the decisions issued pursuant thereto, and it is prohibited to ride a bicycle by a person under the age of 12 Gregorian years, without being accompanied by a cyclist of at least 18 Gregorian years, and to drive an electric scooter or motorcycle Electric bikes or any other type of bicycle determined by the authority by a person under the age of (16) Gregorian years, and without obtaining a driving permit. The decision also prohibited training individually, in which the number of riders is less than four, and training collectively without obtaining a license The prior approval of the authority on this, and the disruption of movement on the bike path in any way or any form.

Without prejudice to any more severe penalty stipulated in any other resolution, whoever commits any of the violations stipulated in the table attached to the resolution shall be punished with the fine indicated in respect of each of them. To take a number of measures, including: impounding the bicycle for a period of thirty days, in the event that the same violation is repeated within one year from the date of the previous violation, provided that the seizure of the bicycle applies to the seizure of vehicles under the legislation in force in Dubai, and not to allow the bicycle to be driven For the period specified by the authority, and in the event that a person under the age of 18 commits any of the violations stipulated in the resolution, his guardian or custodian shall be obliged to pay the value of the fine prescribed for the committed violation, and if this is not possible for any reason, the confiscation of The bike is valid for this reservation

What applies to vehicle impoundment according to the legislation in force in the Emirate of Dubai.

And according to the decision, Dubai Police was granted the power to control acts in violation of it, and the authority, after coordination with the police, and through its employees who are granted the status of judicial police by a decision of the director general of the authority, was given the power to control acts committed in violation of the provisions of the decision and the decisions issued pursuant thereto. In this capacity, they shall have the right to write the necessary seizure reports, and to seek the assistance of police personnel when necessary, and the decision permits anyone with an interest to complain in writing to the Director General and Chairman of the Board of Directors of the Roads and Transport Authority of the decisions, procedures or measures taken against him pursuant to this decision, within 30 days. From the date on which he was notified of the decision, procedure, or measure that was contested by him, provided that this grievance is decided upon within a similar period from the date of its submission by a committee formed by the Authority’s Director General for this purpose, and the decision issued by the committee regarding this grievance shall be final.

The Director General and Chairman of the Board of Executive Directors of the Roads and Transport Authority shall issue the necessary decisions to implement the provisions of this decision, provided that these decisions are published in the Official Gazette of the Government of Dubai.