A "hidden gem" revives Dubai... with creativity from the bounties of the earth

Creativity, the Paraguayan pavilion at Expo 2020 Dubai drew a complex painting entitled “Harvest of the Fruits”, to embody a cultural mix, symbolizing the prosperity of the UAE society, as well as the future of the “hidden jewel of South America” famous for its rich cultural and civilization heritage, and its geography that is based on 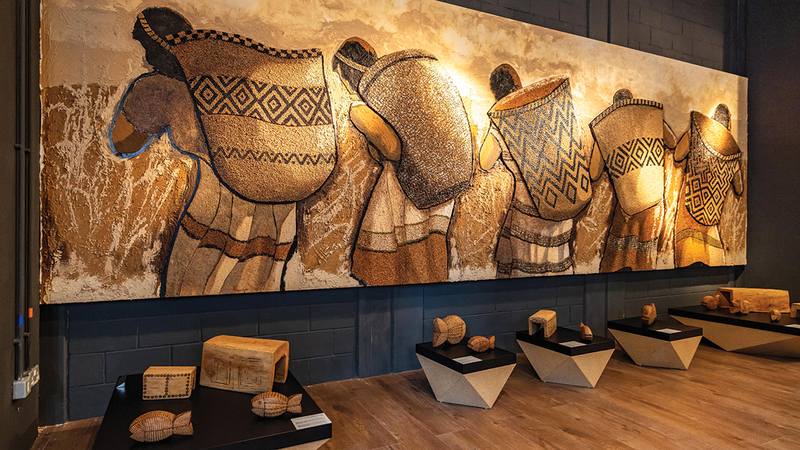 “Harvest of the Fruits” mural with Paraguay beans and seeds

A "hidden gem" revives Dubai... with creativity from the bounties of the earth

Creatively, the Paraguayan pavilion at Expo 2020 Dubai drew a complex painting entitled “Harvest of the Fruits”, to embody a cultural mix, symbolizing the prosperity of the UAE society, as well as the future of the “hidden jewel of South America” famous for its rich civilizational and cultural heritage, and its geography that is based on Natural resources qualified it to be a promising investment destination, and one of the most important new tourist attractions that draw the attention of exploration seekers around the world.

At the beginning of the journey to explore the pavilion, specifically at the entrance to the private reception courtyard, the artwork tops one of the walls of the place, astonishing the beholder with its fine details based on seeds and sand on the one hand, and its complex techniques on the other hand, which a team of specialists, led by the engineer, participated in completing their implementation in Dubai. And the Paraguayan painter Coqui Ruiz, who has devoted his entire artistic career, to creating unusual works, based on unique components, and on what the artist captures around him, the rich treasures of nature, and its unlimited wealth, replacing from time to time brushes and colors with fingers and spoons.

The artwork “Harvest the Fruits” celebrates the values ​​of work and belonging to the land, which Koki Ruiz formulated in his painting, through pure “geographical representations”, which invest the fruits of the land and the seeds of the place and its various grains, in a way that values ​​the bounties of the Paraguayan land, and how to use it for multiple works, this time using, And on the occasion of his presence on the land of the Emirates, with its charming desert sands, which he mastered his prose and installed on the vast background of the work, to blend it skillfully, with the pride of the local exports in his country, which are the seeds of soybeans, and a number of other grains, such as corn, black and white beans, sunflower seeds, and sesame wheat products, and a number of other organic ingredients.

The coordinator of the Paraguayan pavilion, Martin Gabriel Soto, told Emirates Today: "This work, which was presented in our country's pavilion at the exhibition, was developed to be an embodiment of the experience of harvesting fruit and producing food, and to celebrate the values ​​of humanitarian work that our people inherited throughout the ages."

He added about the details of the work leading the scene of the pavilion: "The width of the artwork is about 10 meters, and its height is three meters, and it was designed entirely inside the pavilion dedicated to the State of Paraguay by the artist Coqui Ruiz and his craft team coming from the town of Taniarande in the San Ignacio Misiones region in Paraguay."

The "fruit harvest", which combines the seeds on the one hand, and the sands of the Emirates on the other, expresses the symbol of the desert region that underwent a vast and unprecedented reconstruction process, and achieved continuous success that dazzled the world, and attracted everyone's attention to it, and thus their respect and appreciation. As for the seeds, they symbolize To the wisdom of the authentic Paraguayan people (Guaraní people).

This human and civilized mixture, and the processes of approaching the Emirati experiences on the one hand, and the Paraguayan experiences on the other, from the window of art and creativity, is evidence of the possibility of transforming the impossible into the possible on the ground, through the Dubai model that the painting simulates through the sands of its extended desert, to be similar to the The model of rooted Paraguayan ambition, heading towards the future with confidence, according to Martin Soto, who pointed out that the painting “Harvest of the Fruits” symbolizes the UAE society as a society that grows and thrives in the desert land, and the Paraguayan society is ambitious and happy with the abundance of natural resources and fertile land.

The woman who appears in the painting bearing fruit baskets and the wealth of the earth is the focus of this artwork, as she is the one who harvests the “sacred fruit”, according to the authentic Guaraní culture and heritage, and also symbolizes her possession of seeds to feed her children, while those seeds are grown and harvested With the arms of women from the fertile land of Paraguay, their flowers and fruits bloom, and they give food to everyone.

• The artwork astonishes the beholder with its fine details based on seeds and sand on one hand, and its intricate techniques on the other.

• “The mural was executed in our country’s pavilion at the exhibition, to be an embodiment of the harvest experience, as well as a celebration of the work of our people.”

Intensely, Paraguay, which is called the "hidden jewel of South America", invited visitors to its pavilion, which bids farewell to the "Dubai Expo", today, to learn about the potential of this country, whose residents topped the list of the happiest societies in the world, and the investment opportunities and strategic potentials of water in Renewable energy generation. Paraguay is home to one of the largest dams in the world, with the Itaipu Hydroelectric Project whose generators provide nearly 80% of Paraguay's electricity and 25% of Brazil's electricity needs.

While the pavilion of this country showed how Paraguay connects with the world through rivers and food production, highlighting a large part of its cultural treasures, sustainable development, and new business opportunities open to the world.