There is no alliance or “NATO” at the Negev summit.. Egypt is looking for its interests and is not hostile to Iran

Two Egyptian experts in international relations, one of whom is specialized in national security, agreed that Egypt would not get involved in an alliance against Iran or others, and in this regard they pointed to several reasons that prompted Cairo to go to the Negev. 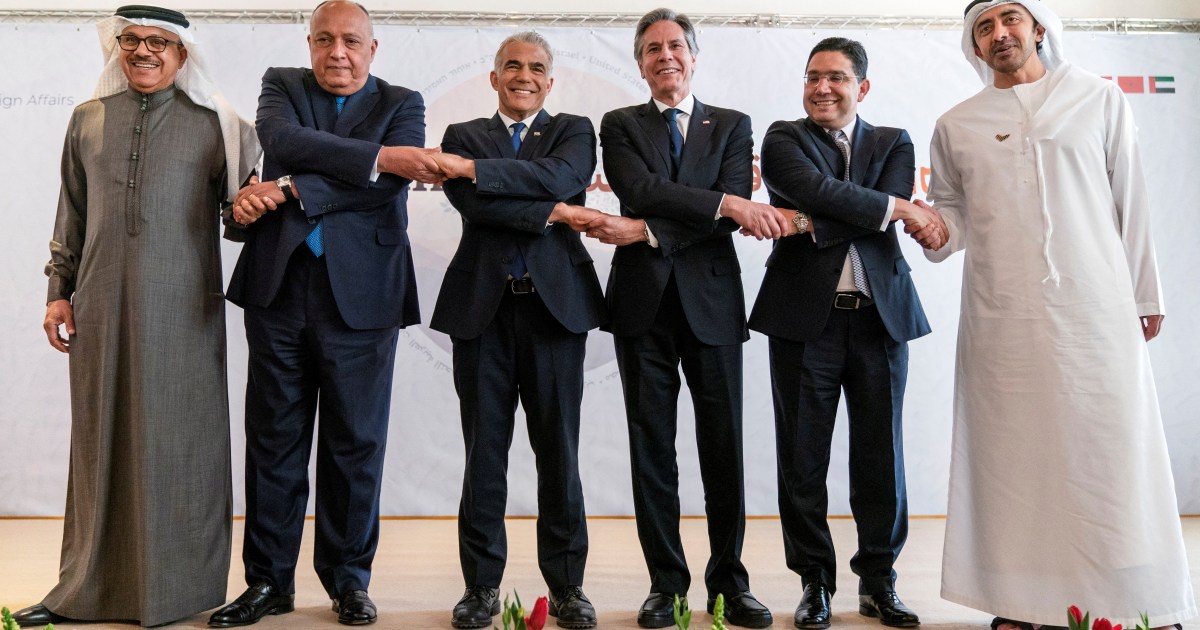 After a ministerial summit hosted by Israel in the Negev desert last Monday, media reports said that the foreign ministers of America, Egypt, Israel, Morocco, the United Arab Emirates and Bahrain agreed to form a "joint coalition to confront challenges in the region", in reference to Iran.

However, Cairo confirmed that its participation in the meeting was not to establish any alliance, or for the summit to be directed to any party. What are the reasons that prompted Cairo to attend this unprecedented historic meeting?

Despite the American-Israeli focus on Iran regarding the outcomes of the Negev Summit, there are challenges and contradictory interests between the participating hexagon, as fears of Tehran's activity in the region differ from one country to another, although the least fear is Cairo.

During the past few years, American and Israeli endeavors appeared, which were met by Arab apathy, by forming an alliance similar to the European NATO, but with the increase in the pace of Arab-Israeli normalization and what was raised later about the Deal of the Century, there was talk again about the formation of the Arab-Israeli alliance supported by international crises, foremost of which is the Russian war in Syria. Ukraine and the American desire to neutralize Iran to confront Russia and China.

Two Egyptian experts in international relations, one of whom is specialized in national security, agreed that Egypt would not get involved in an alliance against Iran or others, and in this regard they pointed to several reasons that prompted Cairo to go to the Negev.

The most prominent of these reasons - according to the statements of the two experts to Al Jazeera Net - is to emphasize the presence of the Palestinian cause, and consider Egypt the main common factor in all Arab and Israeli meetings, in addition to emphasizing that Gulf security is linked to the Egyptian national security system, as well as the requirements for securing the Red Sea, which requires the alliance With all its riparian countries, including Israel.

No alliance against anyone

In response to a question about the nature of what was raised about forming an alliance against Iran, Egyptian Foreign Minister Sameh Shoukry said that the Negev meeting was the basis for which it was convened to resume the Palestinian-Israeli peace process and confirm the two-state solution, in addition to the challenges related to issues of terrorism and extremism and achieving stability in the region away from Interventions from outside its regional environment affecting the national security of the countries of the region.

In a press conference held last Monday evening with his Qatari counterpart, Sheikh Mohammed bin Abdul Rahman Al Thani, Shoukry stressed that Egypt was not participating in the Negev meeting with the aim of establishing any alliance or being directed against any party, noting that his country seeks relations of cooperation and understanding based. On the basis of internationalism and non-interference in the internal affairs of countries, but at the same time it monitors those who adhere to these principles, in addition to coordination with Arab countries, including those who attended the Negev meeting.

From the Egyptian angle, the Negev meeting came after intense political and diplomatic activity during the past days, as the Kingdom of Jordan hosted last Friday a four-way summit that brought together the leaders of Egypt, Jordan, Iraq and the UAE.

Starting from Shoukry's talk that the Negev summit was not intended to form alliances, the expert in national security and international relations, Major General Mohamed Abdel Wahed, said that the summit in itself had a symbolic significance more than just the outcomes it issued, especially since most of its details took place in closed rooms. It did not show clear results.

Abdel Wahed explained that the symbolic significance of the summit is represented in several matters, the first of which is the success of Israeli diplomacy for the first time in history in hosting a summit at a ministerial level in which 4 Arab foreign ministers participate on its soil.

The second of these indications is that the Negev summit is a signal from the United States to Russia, Iran and China that it is able to gather its allies in the Middle East, whether Arabs or Israel, on the heart of one man, and thirdly, what it represents from Israeli messages that there are changes in the region, Tel Aviv will have a major role , regionally and internationally, with American support, according to Abdul Wahed.

With regard to the Egyptian interests and challenges that prompted it to go to the Negev, the security expert explained that his country rejected the alliance, as it is not in enmity with anyone, but rather works according to its interests and the security threats it faces and may be exposed to, he said.

He added that Egypt does not have problems or crises with any country in the region, or conflicts over borders, or differences over geostrategic influence in the region, and its foreign policy is clear not to interfere in the internal affairs of countries, and therefore its participation in the Negev was to protect its interests only and not the interests of others.

On the nature of Egyptian interests, he explained that the Egyptian participation gives strength to the Egyptian position in later stages, beginning with the security of the Red Sea and the ability to secure it, which requires an alliance with all riparian countries and will not stop at the Arab countries only, but will include Israel and the countries of the eastern African coast.

Also, among the challenges that require joining alliances and coordination, including the Negev Summit Group - according to Abdel Wahed - is the fight against terrorism and organized crime, whether by hosting its combat centers or training others and exchanging information with foreign intelligence services.

But at the same time, he ruled out his country's involvement in untouched conflicts, including confronting Iran, as Cairo's view of Tehran's activity does not bear the same concerns as Israel or some Gulf states, provided that it does not conflict with Egyptian national security.

No alliance, no NATO

Close to the previous opinion, political analyst Mokhtar Ghobashi, Vice President of the Al-Farabi Center for Studies (Egyptian/Private), considered it completely unlikely to form an Arab-Israeli NATO alliance, stressing that the matter is particularly difficult for Egypt, especially since the Egyptian authority is fully aware of the popular rejection For such alliances, he said.

Ghobashi explained that the Egyptian goal of participating in the Negev summit was to read what was going on in the meeting, in contrast to the rush of the Emirates and Bahrain and the previous normalization of relations, as the participation of the two countries was to grant protection and safety in light of the Arab system's lack of identity and its association with regional powers that have negative effects on Egypt also.

He stressed that Egypt will not join any alliance, but only has interests with the participating parties, represented in Iranian penetration in the region, and talk about US-Western concessions in favor of Iran in the negotiations on the nuclear file to neutralize it in order to pay attention to the Russian and Chinese dangers.

Egypt - according to Ghobashi - was also invited to participate for other goals, represented in its relationship with the Gulf Cooperation Council and the repercussions of the Ukrainian war, especially with regard to the wheat crisis. Egypt as a first talk linked to the stability of the region.

Ghobashi pointed out that the issue of securing the security of the Red Sea was one of the objectives of the Egyptian participation, as Hebrew reports mentioned that the summit discussed forming a regional security cooperation mechanism to confront air and sea threats and piracy in the Red Sea.