The comprehensive guide to Arabic series in Ramadan 2022

Viewers expect a huge diversity in the Ramadan series 2022, after years of poor Ramadan drama production due to the Corona pandemic during the past two years, the following report includes Ramadan series by Arab countries. 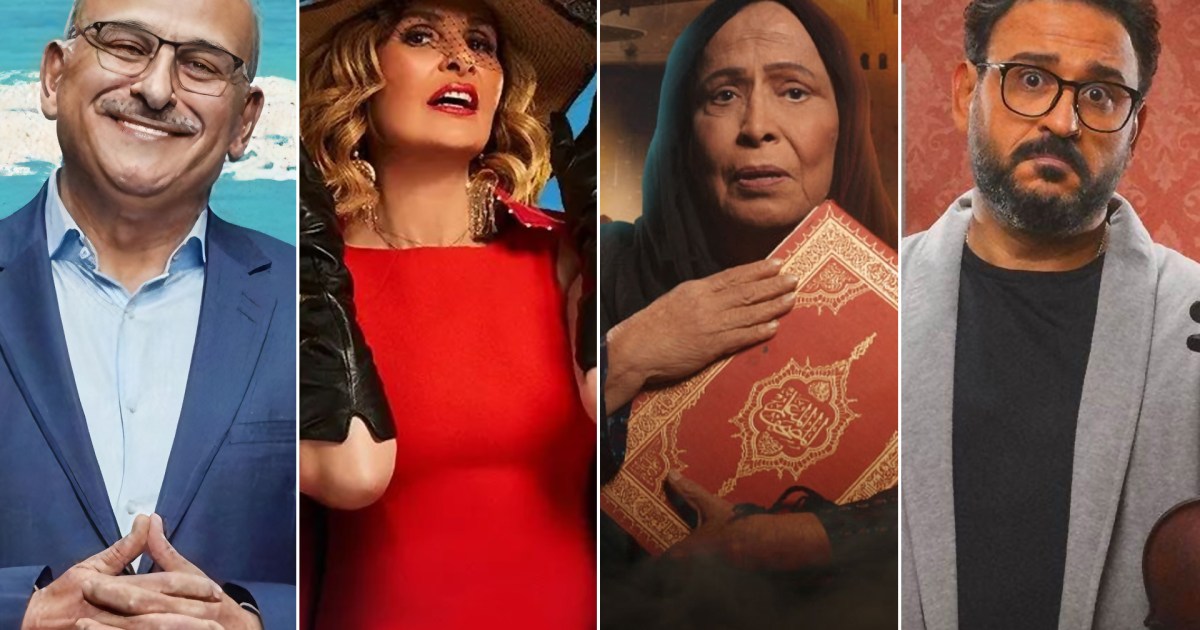 Viewers are waiting for dozens of Arab series during Ramadan 2022, various between comedy, tragic, heritage and historical, and other works that have been specially prepared for the season of television drama in a number of Arab countries.

At the top of the list is the comedy drama that witnesses the return of comedy stars in the Arab world.

In the Egyptian drama, the actor Ahmed Makki returns again to the comedy in the series "Al Kabeer Awi 6", in which he plays the characters "Al Kabeer Aoy", "Johnny" and "Hazelqoum".

Also shown is the second season of the series "In Our Home a Robot", a science fiction comedy about a software engineer who invents two robots to help him.

Comedy series witness Akram Hosni's return to the championship in the series "Maktoob Alia", after the experience of "Men of the House" that he presented two years ago and did not achieve any success at the time.

As for the Syrian comic series, the series "The Three Knights" directed by Ali Muezzin will be shown, in which the actor Ayman Zeidan returns to comedy after an absence of years.

Zidan said - in press statements - that the work belongs to a satirical comedy that defends the rights of the simple.

The series deals with the impact of the economic situation after the Syrian war on the elderly men, and how they try to secure their livelihood.

The second work is the 15th part of the series "Spot Light 15", in which a group of young directors participate, including Ramy Diop, Amr Hatem Ali, Majid Al-Khatib and Ward Haider, in order to work out differently from the previous parts.

Also shown in the comedy category is the Saudi series "Shabab al-Bomb", Part Ten, which reviews the issues facing Saudi youth in a comic framework.

Palestinian artist Imad Farajin will also present the satirical and controversial comedy series "Watan Ala Watar", as part of the "Comedy Hour" segment on Roya TV.

Among the Saudi series, the comedy series "Mishraq" comes within the framework of separate, continuous episodes, co-starring Noura Essam, Abdullah Al-Buraq and Khaled Al-Ajerib, and the series is directed by Wael Ihsan.

In addition to the comedy, a number of historical series will be shown, including the Syrian series "Haret al-Qubba" Part Two, through which author Osama Kokash continues to shed light on the people of the ancient Levant during the Ottoman rule of the Levant in the 19th century.

The series "Sunna Al-Jarish", written by Muhammad Al-Nabulsi and directed by Manaf Abdullah, deals with the period of the Second World War and its impact on a number of Arab countries in the forties of the last century in a humanitarian and social framework.

In events that occurred 100 years ago, author Abdel Rahim Kamal deals with a different plot between authenticity, history, love and conflict in the Egyptian series "Ghamm Island".

This year, the Egyptian drama will witness the presentation of more than 30 series.

And the beginning of the third part of the series "The Choice".

The makers of “The Choice” series continue to review the stories of the Egyptian policemen after 2013, and after the success of the first and second parts, the championship was assigned this time to Ahmed El-Sakka, Ahmed Ezz and Karim Abdel Aziz, and the series is directed by Peter Mimi.

In the same category, the series "The Returnees", starring Amir Karara and Amina Khalil, is shown, and his story revolves around confronting terrorism.

As for the series "Btloo Al-Rouh", starring Menna Shalaby and Elham Shaheen, written by Muhammad Hisham Obeya and directed by Kamla Abu Zekry, it sparked controversy as soon as the propaganda poster was shown to it.

In the series "Bloo' al-Rouh", Menna Shalaby presents the character of an electronic engineer who is forced by circumstances to join an armed group.

Director Nadine Khan is participating in her first dramatic work, which is the series "Min Said", a 15-episode social comedy, starring Jamal Suleiman, Nadine and Ahmed Dash, and written by the "Sard" workshop under the supervision of Maryam Naoum.

In social drama, some Ramadan series this year discuss women's issues, including the Egyptian series "Faten Amal Harbi", which discusses the mother's custody of her children after separating from her husband.

The series was written by Ibrahim Issa, directed by Mohamed Jamal Al-Adl, and co-starring Nelly Karim and Sherif Salama.

The series "Happy Dreams" written by Hala Khalil and directed by Amr Arafa.

For more, you can view the Egyptian Ramadan 2022 series by clicking here.

As part of the quoted drama, the series "Rejein Ya Hawa" is shown, which is taken from a radio series by the late scriptwriter Osama Anwar Okasha, and the series starring Khaled Al-Nabawi and Nour.

And the series "Suits in Arabic", adapted from an American series of the same name, and co-starring Aser Yassin, Ahmed Daoud and Reem Mustafa.

On heritage and being affected by war and social issues, comes the Syrian drama shown in Ramadan 2022.

This Ramadan, the series "Ala Al Hob", starring Duraid Lahham, Salo Haddad and Osama Al Romani, and directed by Basem El Salka, will be shown this Ramadan.

The series "On Love" deals with the friendship between the two heroes of the series, Amin and Hassan, a friendship that spanned four decades, but they face a crisis because of their children.

The events of the Syrian series "Kisser A'em" by director Rasha Sharbatji deal with the issue of unregistered Syrian children in Lebanon, which is concerned with depriving them as citizens who deserve the Lebanese identity and do not receive it.

The events of the Syrian series "Suspended" revolve in the psychological realms of the Syrians after successive crises in the region and the war in Syria.

As part of the Ramadan drama, the series “Shadow” written by Mahmoud Idris and Zuhair Al Mulla, and directed by Mahmoud Kamel, will be shown.

The series is the return of Jamal Suleiman to the Syrian drama, as he embodies the character of a fashion designer, and co-starring Abdel Moneim Amayri and Kinda Hanna.

The series "Red My Heart" is also shown, and its events revolve around a murder on a wedding night, and the heroes begin to untangle the threads to search for the identity of the killer.

For more, you can view the Ramadan 2020 Syrian series by clicking here.

Dominates the social character of the Gulf drama in the upcoming Ramadan.

In the Kuwaiti series "Skyscraper", author Nouf Al-Mudhaf raises many problems of communication between generations.

And about the dominance of mothers, the events of the series “From Al Haram Street”, co-starring Hoda Hussein, Khaled Al-Buraiki, Nour Al-Ghandour, Maram and Laila Abdullah, directed by Al-Muthanna Sobh.

The series "Baby" mixes comedy and tragedy, and revolves around a girl who suffers from a state of mind that makes those around her sympathize with her, and she is loved by the popular area in which she lives.

And within the social comedy, the series "Kid Al Harem", co-starring Egyptian Rogina, and Saudi Kholoud Muhammad, and written by Fahd Al Balushi and directed by Mustafa Fekry, is also shown.

The events of the series "Kid Al Harem" revolve around the struggle over love and marriage, and intrigues between wives.

For more, you can view the 2020 Ramadan Gulf series by clicking here.

As for the Saudi series during Ramadan, comes the third part of the series "Al-Asouf", which deals with the nineties in a social context.

As for the series "Who Is Our Son", its events revolve around two young men, one rich and the other poor, who decide to exchange roles, and each takes the other's place after 30 years.

Within the framework of suspense and excitement, the Saudi series "Al-Zahiriya", which revolves around the year 1978, revolves around a murder committed by a person against his wife and flees to the city of Riyadh.

During the 2022 Ramadan drama, the comedy series "Galta" will be shown, which will witness the participation of actors from Syria.

It is shown in the list of Jordanian series, "Dhiab Habbab Al-Reeh", a Bedouin work on the popular biography of the pre-Islamic poet Antarah bin Shaddad, and it talks about the poet and epic hero Diab Al-Dhib.

The series “Thyab Hbab Al-Reeh” is written by Wafa Bakr and directed by Rola Hajja, and a group of Jordanian stars, most notably Muhammad Al-Abadi, Abeer Issa, Luna Bishara, and Hassan Al-Khamaiseh, participate in the series.

As for the events of the series "A Distance from Love", it revolves between Amman and Riyadh about the love story of a Saudi young man who studies at a Jordanian university and meets a girl from an aristocratic family.

For more, you can view the Ramadan 2022 Jordanian series by clicking here.

Despite the lack of production, there are many Iraqi series participating in the dramatic race in the upcoming Ramadan, most notably the “Jouri” series, starring the Iraqi actor Munadil Daoud, and the “Sardab” series starring the actor Bassem Al-Qahar, and the work is the second part of the series “The Red Zone.” The series "The Diamond is Broken" and discusses the issue of forgery and trafficking in human organs, the series "Daughters of Saleh", and "The Night of Fall".

For more, you can view the Ramadan 2022 Iraqi series by clicking here.

The comedic character is the color that dominates most Yemeni series in the coming month of Ramadan.

In the foreground is the series "Eyal Al Marhoum", one of the largest drama productions in Yemen.

A group of comedians are participating in the series "Eyal Al-Marhoom".

The heritage series "Spring of Mocha" reviews the city of Mocha 200 years ago, which exported Yemeni coffee.

The series "Layali Al-Jahmaliyah" is shown and its events take place in the eighties of the last century, through the most famous residential neighborhoods in Taiz.