Russia-Ukraine negotiations begin, or will there be an important breakthrough? Turkey's "bridge" is exquisite!

China News Service, March 29 (Reporter Meng Xiangjun) "If everyone burns the bridge with Russia, who will communicate with them in the end?"   On March 27, local time, at the Doha Forum, Turkish Presidential Spokesperson Ibrahim Kalin said. Kalin pointed out that Turkey and other countries still need to maintain dialogue with Russia, and the international community needs to listen to Russia's v 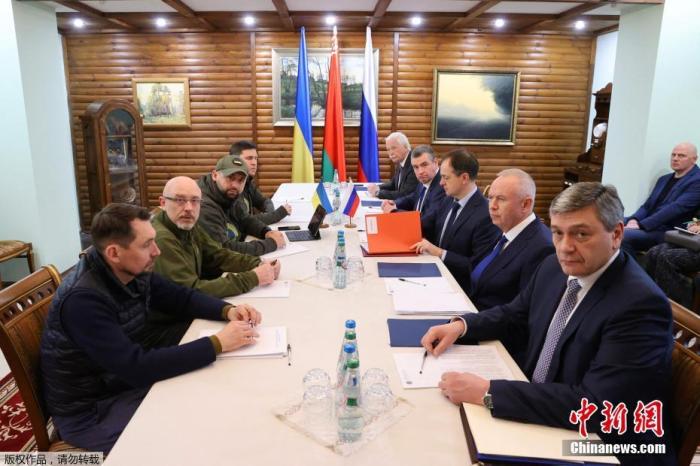 China News Service, March 29 (Reporter Meng Xiangjun) "If everyone burns the bridge with Russia, who will communicate with them in the end?"

Kalin pointed out that Turkey and other countries still need to maintain dialogue with Russia, and the international community needs to listen to Russia's voice.

And Turkey will try its best to bring Russia and Ukraine to an end to the conflict.

Under the mediation of Turkey, a new round of face-to-face negotiations between Russia and Ukraine started in Istanbul, Turkey at around 10:30 a.m. local time on the 29th.

Data map: On March 7, local time, the Russian-Ukrainian delegation held the third round of negotiations in the Belovezh Forest in Belarus.

What key progress may be made in this round of negotiations?

What kind of negotiation goals have Russia and Ukraine set?

Gradually become the "bridger" of negotiations, why is Turkey?

【What is the meaning of the negotiation location?

This round of negotiations is closed-door and closed to the media.

The negotiating location in Istanbul was agreed upon by both parties after a phone call between Turkish President Erdogan and Russian President Vladimir Putin on the 27th.

Istanbul is located at the eastern end of the Balkan Peninsula and on the west bank of the southern mouth of the Bosphorus, with a very prominent strategic position.

Russia, Ukraine and Turkey are all on the verge of the Black Sea, and the importance of Istanbul, which is the only entrance to the Black Sea, can be imagined.

In addition, as a cultural and historical city spanning the two continents of Europe and Asia, Istanbul has always been known as the "bridge" between Eastern and Western cultures.

Negotiations in such a city have a certain symbolic meaning.

During the previous rounds of negotiations, the Russian side proposed six conditions, five of which were required to be written into the Ukrainian constitution, namely: Ukraine renounces its membership in NATO, grants Russian the status of the second official language in Ukraine, and recognizes Donetsk and Lugan. "Independence" of Skk, recognition of Russian sovereignty over Crimea, denazification of Ukraine and prohibition of ultra-nationalism, and demilitarization of Ukraine.

These issues are: Ukraine's renunciation of NATO membership, the granting of Russian the status of the second official language of Ukraine, partial disarmament, and collective security.

It can be seen that this coincides with some of the requirements of the Russian side.

But at the same time, it shows that on some key issues, it is still difficult for the two sides to reach an agreement or make compromises.

This means that the negotiation has entered a critical stage.

On the 28th, Uzbek President Volodymyr Zelenski reiterated that Uzbekistan's priorities in the negotiations remain unchanged, which is still sovereignty, territorial integrity and security.

It also noted that Ukraine was ready to accept a "neutral and nuclear-free status" as a "most important" part of the deal.

However, "neutrality" must be guaranteed by a third country, and the relevant terms must be agreed by a referendum.

Ukrainian Foreign Minister Curleba made a prediction on the 28th.

It pointed out that the lowest goal of the new round of negotiations is to resolve humanitarian issues; the highest goal is to reach a ceasefire.

He stressed that Zelensky has drawn a red line for negotiation and will not trade people, land or sovereignty.

It is worth noting that the process of the previous rounds of negotiations only lasted a few hours, and the time span of the round of negotiations in Istanbul is several days.

According to the analysis, this may mean that the negotiation clauses will become concrete, and the representatives will spend more time fully negotiating and "bargaining".

Since the outbreak of the Russia-Ukraine conflict, Turkey's attitude towards Russia has actually been traceable.

Previously, more than 30 countries closed their airspace to Russia, but Turkey did not follow suit. Although almost the whole of Europe has decided to impose severe sanctions on Russia, Turkey also insisted on being a "minority" who refused to impose sanctions.

Recently, the intensity of diplomatic mediation between Turkish President Erdogan and Turkish Foreign Minister Cavusoglu is no less than that of French President Macron, who is frowning in the Elysee Palace.

On March 10, local time, Cavusoglu participated in the talks between the Russian and Ukrainian foreign ministers in Turkey. This was the first time a third country representative appeared at the "negotiation" site.

This at least shows that Turkey is a third party recognized by both Russia and Ukraine.

According to Turkish President Recep Tayyip Erdogan, Turkey and Russia and Ukraine are both "talkable" and become "symbols of hope".

Cavusoglu said at the time that Turkey would continue to act as a mediator of the conflict and host the next round of talks between Russia and Ukraine.

Subsequently, Cavusoglu went to Russia and Ukraine to mediate.

During the period, the Ukrainian side expressed its support for Turkey as a mediator in preparing for the meeting between Putin and Zelensky.

Over there, Erdogan is also in close communication with the heads of many countries.

On the 14th and 22nd, Erdogan met with German Chancellor Scholz and Dutch Prime Minister Rutte respectively, expressing that he would strengthen diplomatic efforts and promote the resolution of the crisis.

On the 25th, Erdogan and Zelensky had a phone call and introduced the "diplomatic efforts" of the Turkish side.

He also said that he had received Macron's approval for waiving energy sanctions against Russia.

You know, this is the "wish" that Zelensky wants to realize most recently.

On the 17th, the Turkish Presidential Palace stated that Erdogan and Putin discussed the latest developments in the Russian-Ukrainian conflict and the local humanitarian situation.

Erdogan proposed that Putin and Zelensky travel to Turkey for a meeting.

On the 27th, Erdogan had another phone call with Putin to finalize the venue for a new round of talks between the Russian and Ukrainian delegations.

[Behind the Negotiations: Erdogan's Balance Technique]

"Russia Today" pointed out that this time, Turkey is committed to maintaining neutrality in the Russian-Ukrainian conflict and seeking to play a "mediator" role.

Erdogan recently emphasized that the country "has purchased nearly half of its natural gas from Russia, and we are still cooperating with Russia to build nuclear power plants... I will not let our people freeze or stop the industry." Therefore, no Energy sanctions against Russia.

In addition to the huge energy demand, Singapore's "Lianhe Zaobao" pointed out that the Turkish economy also relies on Russia for trade and tourism.

In 2021, the total trade volume between Turkey and Russia will reach 30 billion US dollars.

And recently, thousands of Russians have traveled to Turkey, seeing it as a safe haven to evade sanctions.

In recent years, due to Turkey's purchase of the Russian-made S-400 air defense missile system, and the US government's decision to "genocide" the Armenians by the Ottoman Turkish government, the Erdogan regime has had many conflicts with the US and Europe.

This time, the United States even proposed that Turkey transfer the Russian-made S-400 system to the Ukrainian army.

The Russian Satellite News Agency quoted analysis that the West urgently needs a conflict between Ankara and Moscow.

Looking back at history, any confrontation between the two countries is good for the West.

At present, Turkey has to maintain a clever balance in the "big triangle" relationship between Turkey, Russia and Ukraine.

As a member of NATO, it has military and defense relations with Ukraine and maintains close cooperation with the defense industry.

The special relationship between Turkey and Ukraine also includes balancing Russia's influence in the Black Sea Basin, the Caucasus, and Central Asia.

Turkey has always refused to recognize Crimea as belonging to Russia, and condemned the Russian side in the early days of its entry into Ukraine.

After the conflict between Russia and Ukraine, Erdogan once announced that according to the "Montreux Convention" adopted in 1936, all foreign military ships, including Russia's Black Sea Fleet, are prohibited from transiting the Bosphorus and Dardanelles. strait.

The outbreak of high-intensity conflict in neighboring Russia and Ukraine is not in the fundamental interests of Turkey.

As it is now, by playing the role of "peace messenger" and gaining the trust of all parties, Turkey will be expected to increase its influence in NATO's internal and regional affairs.

This is also one of Erdogan's pursuits.

Data map: In 2017, some personnel in the attempted military coup in Turkey appeared in court on suspicion of plotting to "assassinate" President Erdogan.

Because in 2016, an attempted military coup d'état that was allegedly backed by the US and Western forces and caused serious bloodshed broke out in Turkey, which almost endangered the regime.

The incident was described by Erdogan as a "historical turning point" and made him aware of the unreliability of Western allies.

Since then, Erdogan has accelerated the adjustment of the direction of internal and external governance, actively promoted diversified and balanced diplomacy, and chose to approach Russia in some interests.