43 years of cold peace... Is what unites Egypt and Israel greater than what divides them?

After more than 4 decades, the peace agreement between Egypt and Israel is still facing widespread popular rejection that stands in the way of unprecedented transformations in the history of relations between the two parties. Do common interests dissolve a static peace? 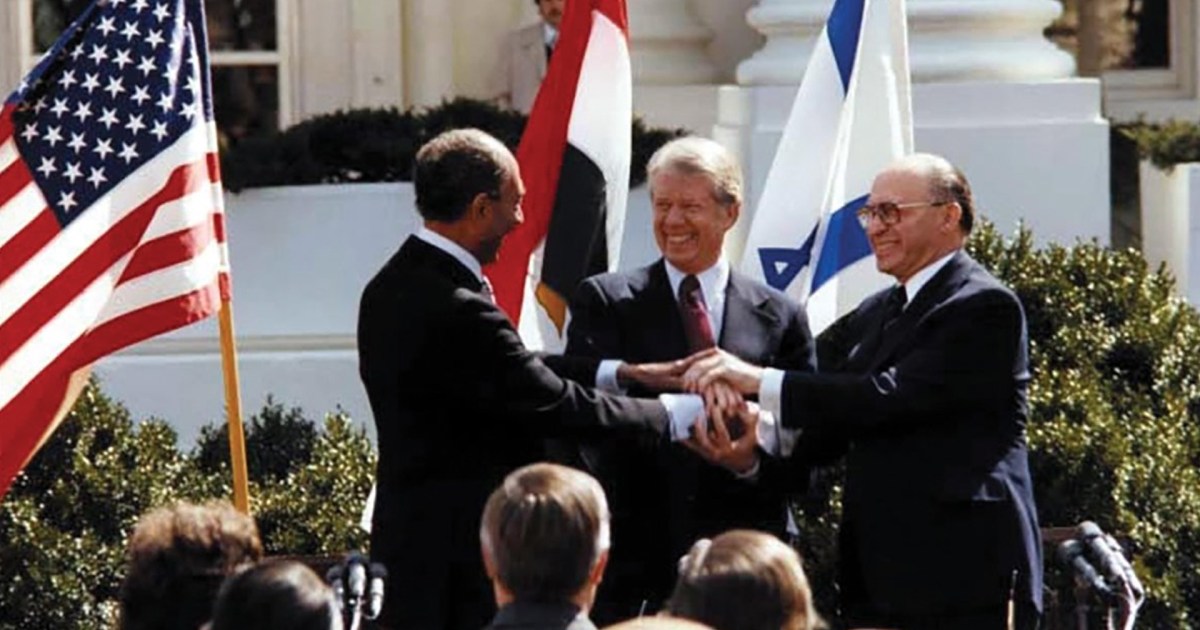 More than 4 decades ago, Egypt and Israel signed the peace agreement (known as Camp David) under American auspices, which ended years of wars between the two parties, but it still faces widespread popular rejection that stands in the way of unprecedented transformations in the history of relations between them.

Will common interests melt a cold peace and make it warmer, in the words of current Egyptian President Abdel Fattah el-Sisi?

On March 26, 1979, the peace treaty was signed at the US White House in the presence of President Jimmy Carter, the Egyptian Mohamed Anwar Sadat and the Israeli Prime Minister Menachem Begin, and it complemented the framework for Middle East peace, which was issued by the Camp David negotiations in the US on September 17, 1978.

The agreement resulted in dramatic consequences on several levels, most notably Egypt’s recovery of the Sinai Peninsula, the assassination of Sadat on October 6, 1981, the day of the celebration of the eighth anniversary of the October 6, 1973 war, the Arab boycott of Cairo, the transfer of the Arab League headquarters from it and the suspension of its membership, Before reversing these steps, some Arab countries raced, in recent years, towards the normalization train.

Just as former President Hosni Mubarak (1981-2011) was far from hostile to Tel Aviv, Sisi followed suit, perhaps at a greater pace, which prompted Israeli leaders to express on more than one occasion their satisfaction with the accelerating rapprochement between the leaders of the two sides in recent years.

The most prominent recent rapprochement stations were the Egyptian mediation during the Israeli aggression on Gaza in May 2021, the official public visits of senior officials in Israel to Egypt, in contrast to a secret one revealed by media reports, government flights that landed for the first time at Israeli airports, energy agreements and the amendment of the peace agreement to enhance The presence of the Egyptian army in the Sinai, and others.

Today, Sunday, Israel will host for the first time what it describes as the “Negev Summit” with the participation of the foreign ministers of Egypt, Bahrain, the UAE and Morocco, in addition to America, with the aim of “a common and united confrontation of challenges, cooperation for the stability of the region and economic development,” according to the expression of the “Israel in Egypt” page. " on Facebook.

The Israeli page linked the "Negev Summit" to the celebration of the 43rd anniversary of the signing of the peace agreement with Egypt, and said that that signing paved the way for peace with other Arab countries in the region.

From Camp David to Warm Peace

The 1973 war paved the way for Egyptian-Israeli peace, and was reinforced by Sadat's efforts to rapprochement with the US administration at the time, who delivered an emotional speech to the Knesset on November 19, 1977, promising that what has passed is the last war and the end of pain. He was the first Arab president to visit Israel and make a deal with it. .

Not much passed until Cairo and Tel Aviv signed the Framework Agreement for Peace at Camp David, and about 6 months later, on March 26, 1979, the peace treaty was officially inaugurated.

Among the most prominent provisions of the treaty is the ending of the state of war, the withdrawal of Israel from the Sinai in its entirety, and the establishment of an autonomous region for the Palestinians in the West Bank and Gaza Strip, while ensuring the passage of Israeli ships through the Suez Canal.

Egypt derives from normalization an annual US military aid estimated at $1.3 billion, in addition to other economic aid, although it has so far faced criticism for reasons related to asserting qualitative military superiority in favor of Tel Aviv at the expense of Arab countries.

On the commercial level, in December 2004, Egypt and Israel signed the "QIZ" agreement, which allows Egyptian companies that use Israeli inputs to export their products to the United States with customs exemption.

It is ironic that Egypt, which signed an agreement in 2005 to export gas to Israel for a period of 20 years, has been importing gas from Tel Aviv since the beginning of 2020 through a 15-year deal.

In addition, Sinai, which witnessed the Egyptian-Israeli wars, turned into a station for security and intelligence cooperation between Cairo and Tel Aviv, as Sisi indicated in an interview with an American satellite channel in early 2019 by saying that the Egyptian army is working with Israel against "terrorists" in North Sinai.

On more than one occasion, Sisi praised peace with Israel, and repeatedly called on regional leaders to follow Sadat's example in "overcoming established literature and concepts" in reference to the Arab rejection of normalization.

In May 2016, Sisi first used the term “warm peace” to describe the desired relations with Israel. “Some say that peace with Israel is not warm, but I say that a warmer peace will be achieved if we (we could) resolve the issue of our Palestinian brothers.” .

Despite the official peace process between the two parties, Israeli dreams of ideal relations are still far from being achieved for several reasons, the most prominent of which is that the Egyptian regime is still keen not to see a comprehensive change in bilateral relations, which is revealed by the negative local media coverage so far of the Israeli role in the region. .

In light of international and regional challenges and interests that have become common and the fever of Arab normalization is increasing, in exchange for threats to Egyptian strategic interests, the question remains: Is what unites Egypt and Israel greater than what divides them?

According to observers, most of the Egyptian people are still hostile to Israel, and professional unions, which include millions of workers, remain at the forefront of opposing normalization, along with religious institutions, especially Al-Azhar.

In contrast to the search for common interests, there are Egyptian concerns about the effects of Arab normalization with Israel, as the Suez Canal faces possible negative repercussions regarding alternative transportation projects, among which are those sought by Tel Aviv and Abu Dhabi.

In addition to the threat of Israeli penetration into the Egyptian depth in the Arab world and Africa in areas and files in which Cairo was the main player, whether in Palestine, Sudan, Libya or the Nile Basin countries, especially the crisis of the Ethiopian Renaissance Dam, which Cairo considers a threat to its national security and water future.

Regarding his assessment of the normalization experience, Professor of International Law and former Assistant Foreign Minister Abdullah Al-Ashaal said that Egypt was badly affected for 3 prominent reasons: the first of which was the occurrence of Israeli penetration into the state’s apparatus, according to the Mossad’s own admission.

The second reason - according to Al-Ashaal's statements to Al-Jazeera Net - is the weakening of the Egyptian role in the Arab world, after the Arab countries also penetrated the normalization agreements (the Emirates, Bahrain, Sudan and Morocco), and therefore Egypt is no longer the gateway that connects Israel with the Arabs, as Sadat aspired to be a mediator or peace broker. .

Third: There is a warm peace not between the homeland, but between the current regime and Israel, and the interests between them remain greater than what divides them, according to him.

The former diplomat stressed that his country never benefited from normalization, considering it a deal concluded between Begin and Sadat only, and there are no issues that bring Israel together with the Arabs except the interests of the ruling regimes.

As for the future of bilateral relations, Al-Ashal expected that they would be subjected to major tremors for reasons related to local developments in Egypt (he did not specify) and the decline in American interest in the Arab region, where Israel is absolutely dependent on Washington, in addition to the peoples awareness that the current regimes are against their interests.

Regarding what was raised in the media about the motives of Sisi hosting the Israeli Prime Minister and the Crown Prince of Abu Dhabi last week, and linking the meeting to talks to revive the nuclear agreement with Iran, Al-Ashal ruled out Cairo’s participation or involvement with Gulf states and Israel in the Iranian file.

But he saw that energy interests and gas discoveries could be an entry point for further normalization, noting that they are among the many sectors that lack transparency, stressing that hope remains in the face of peoples' efforts to normalize, and stop the negative effects of Israel's penetration of real Egyptian interests.

According to a previous analysis by the Israeli Institute for National Security Studies, the peace treaty serves the interests of both parties and has crossed the point of no return, but the analysis called at the same time to continue to carefully monitor the reinforcements of the Egyptian army.

The institute pointed out that peace with Egypt is of strategic importance to Israel from a political perspective (mediating with the Palestinians), a military perspective (keeping Egypt out of the war), as well as an economic perspective (reducing the defense budget).

As for Cairo's diplomatic efforts against Tel Aviv's nuclear capabilities, the Israeli Institute for National Security Studies attributed it to the fact that it does not stem from a sense of threat, but rather from its self-perception as Egypt is the leader of the Arab world.