In Kharkiv at war, a concert to "continue to live" despite the Russian invasion

"Even when the guns speak, the music does not stop": in Kharkiv bombarded daily by the Russian army, a handful of Ukrainian musicians offered on Saturday, to a small but… 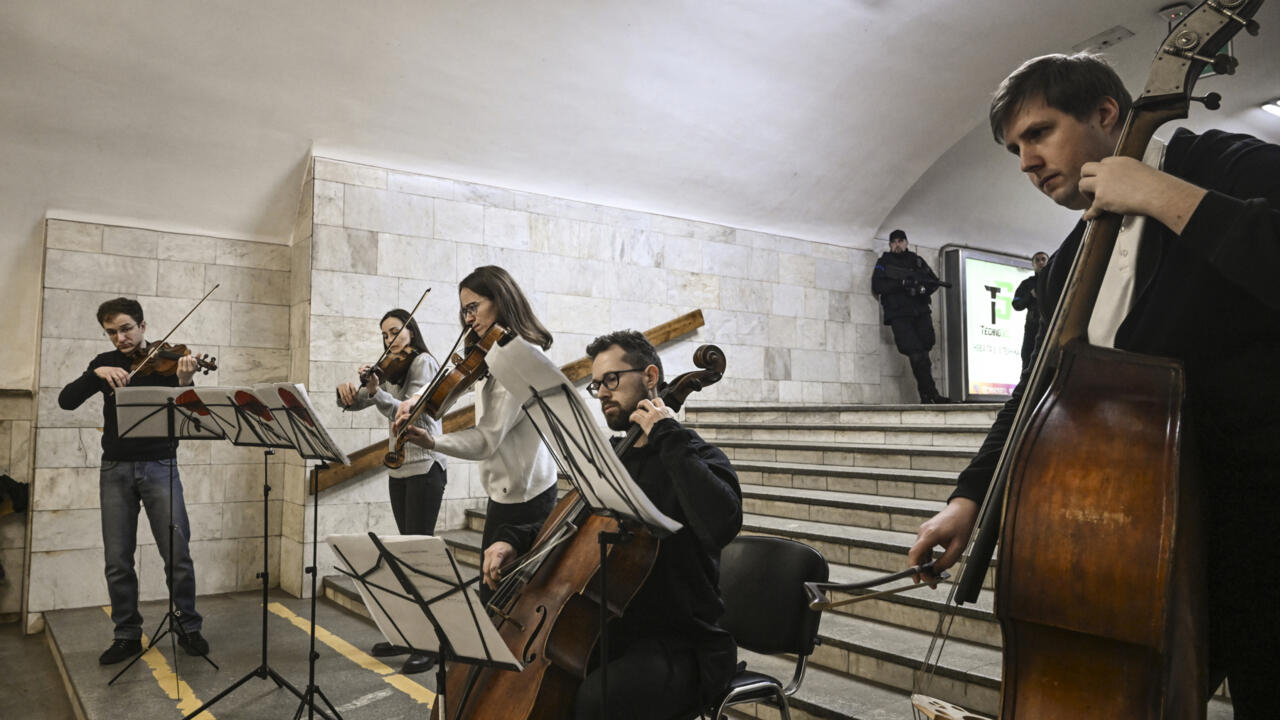 Three violinists, a cellist and a double bass player played for a few dozen people for half an hour in one of the major metro stations in Ukraine's second city, near the Russian border.

They then played a melody by Myroslav Skoryk - Ukrainian composer who died in 2020 - often used by President Volodymyr Zelensky in his videos and posts on social media.

People living in a metro station used as an air-raid shelter listen to musicians in Kharkiv, Ukraine, on March 26, 2022 Aris Messinis AFP

The mini-concert took place on a marble staircase in a station with a cathedral atmosphere, under the delighted gaze of many displaced people.

Dozens of families have lived there since the beginning of the Russian invasion on February 24, fleeing the war on the surface and sleeping in old wagons immobilized on the quays.

"When our heart is full, it helps us to overcome difficult times", launched Serguiï Politoutchy, director of the Kharkiv Music Fest - one of the most prestigious music festivals in Ukraine - at the origin of this initiative, organized the day this annual event should have opened.

Despite the sound of guns, "the music doesn't stop," he says.

"This mini-concert is the symbol of the light that will overcome darkness, the truth that will triumph over lies (...) The organization was a bit complicated because of security, but we got there!" , he welcomed.

"Be useful to my people"

With their armed escort, the governor of the Kharkiv region, Oleg Sinegoubov, and the mayor of the city, Igor Terekhov, attended the recital.

People living in a metro station used as an air-raid shelter listen to musicians in Kharkiv, Ukraine, on March 26, 2022 Aris Messinis AFP

"A month ago, we could not imagine that our military and our citizens could, hand in hand, protect the city (...). In these times of war, we are all working together for victory, this concert shows that we are on the right track", rejoiced Mr. Terekhov.

Among the five musicians, professional cellist Denys Karachevtsev, whose videos showing him performing in front of bomb-destroyed buildings in Kharkiv have been doing the rounds on social media in recent days as an almost magical moment between scares.

A boy on a train from a metro station used as a bomb shelter by residents in Kharkiv, Ukraine, March 26, 2022 Aris Messinis AFP

"It was just an idea, to be useful to my people, to my country and to my hometown. I love this city, its people. Anything I can do to help, I will," he said. he told AFP.

"People have told me that my videos have brought some normality back into their lives. It's important right now. (...). We are not afraid, we are strong and everyone can help in their own way. manner".

Other Ukrainian musicians have shared musical parentheses on social networks: violinist Vera Lytovchenko in her shelter in Kharkiv, pianist Irina Manioukina in her damaged house near kyiv, or members of the Odessa opera, in front of their room protected by sandbags.

Musicians play for people living in a metro station used as an air-raid shelter in Kharkiv, Ukraine, on March 26, 2022 Aris Messinis AFP

"Everyone came to my house for a single rehearsal", says, radiant, Tatiana Shukh, one of the three violinists of this mini-concert in Kharkiv.

"During the first days of the war, there was total silence in me. Then I understood that we must continue to live, for our ideals, for our country, for our future", she says.

"Playing our instruments is what we know how to do best, we will do it in all circumstances".

And to add with a big smile lighting up his misty eyes: "perhaps it was the best concert of my life".