Amid large crowds waving its country's flags, and to the tune of folk songs, Pakistan celebrated, the day before yesterday, its National Day at "Expo 2020 Dubai". The celebration began with the ceremonies of raising the flags of the Emirates and Pakistan, on the platform of nations in Al Wasl Square. 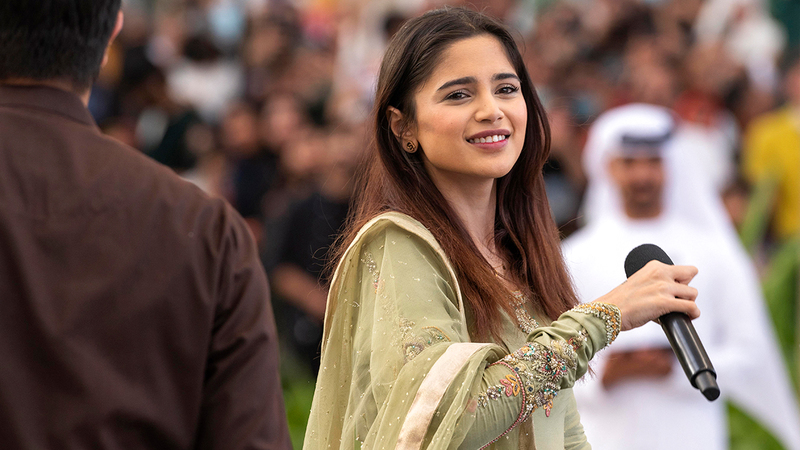 Pakistan flags flutter to the tune of patriotic songs

Amid large crowds waving its country's flags, and to the tune of folk songs, Pakistan celebrated, the day before yesterday, its National Day at "Expo 2020 Dubai".

The celebration began with the ceremonies of raising the flags of the Emirates and Pakistan, on the platform of nations in Al Wasl Square.

Najeeb Muhammad Al-Ali, Executive Director of the Office of the Commissioner-General at Expo Dubai, said: "The Pakistan Pavilion stimulates meaningful conversations about the country's undiscovered treasures, by highlighting its rich history, cultural and religious diversity and hospitality, while highlighting the opportunities it offers. In various sectors, such as tourism, trade and investments.

He added: "The relations between the UAE and Pakistan are deeply rooted and long-standing, as they have grown significantly since their establishment.

From this standpoint, we aim to further develop our thriving partnership and explore prospects for enhancing cooperation in areas of common interest, including attracting foreign direct investment, infrastructure, manufacturing, and more, for the benefit of our peoples.

The celebration witnessed an artistic performance that took the audience on a lyrical journey to the country of “Land of Colors”, in which a group of young artists participated, such as pop stars Aseem Azhar and Emma Page, accompanied by talented musicians, who performed a group of popular patriotic songs with which the present audience from the Pakistani community interacted.

For his part, the Ambassador of the Republic of Pakistan to the UAE, Afzal Mahmood Mirza Sultan Mahmud, said: “Pakistan is a gateway to the Middle East, Central Asia, Afghanistan and Western China with more than 5,000 years of history, and mountain ranges with a height of 8000 meters, it is the cradle of civilization, and (The Roof of the World)”, noting that his country’s government decided to take advantage of the country’s location to connect, connect and facilitate trade, as it is likely that the Gwadar port, and the economic corridor between China and Pakistan, will turn the country into a melting pot of economic activities within our region.

He added, "We are proud of our 50-year diplomatic relations with the United Arab Emirates, as there are about 1.6 million Pakistanis who not only contribute to the development of the two countries, but also represent a bridge between them."

The Pakistan Pavilion at Expo Dubai is an opportunity to learn about the homeland of one of the oldest civilizations, its culture and its charming geography. economic and others.

Pakistan, with a history spanning nearly 5,000 years, is one of the oldest civilizations that arose along the Indus River.

Pakistani artists performed a concert at the Jubilee Theater in "Expo 2020 Dubai", the day before yesterday, as part of the celebration of their country's National Day.

Amidst a large presence in the open theater, the celebration started with promising singers from Sortal Academy, who ignited the audience's enthusiasm with songs and a dynamic performance, followed by a performance by the rock band Bayan.

After that, the audience had a date with the twins Aaron and Sharon, who became famous under the name "Twin Leo".

Rapper Hassan Rahim and the Young Stars band participated in the performances, to witness the "Expo Dubai", a Pakistani version of rap and hip-hop songs.

The multi-award winning singer, Emma Page, took to the stage, amid a warm welcome from the audience, to sing her famous songs.

After that, the audience had a date with the singer, songwriter and musician Assem Azhar, at a special end to the evening with his famous songs.

Azhar is the fourth Pakistani singer whose songs have more than 100 million views on YouTube.

During the ceremony, a video of Pakistan's most famous landmarks and scenic nature was shown on theater screens.

• The Pakistan Pavilion is an opportunity to learn about the homeland of one of the oldest civilizations, its culture and its charming geography.