The masterpieces of Al-Mutanabbi and Abu Nawas.. under the "Dubai Expo" tent

The masterpieces of Al-Mutanabbi and Abu Nawas entice visitors Al-Farabi Ensemble fascinates the audience with Arabic poems and experimental music The masterpieces of Al-Mutanabbi and Abu Nawas.. under the "Dubai Expo" tent The band is based on a mixture of eastern and western musical instruments. From the source picture A distinctive artistic experience, the members of the “Al-Farabi” musical group succeeded in dedicating its idea to present it, finally, 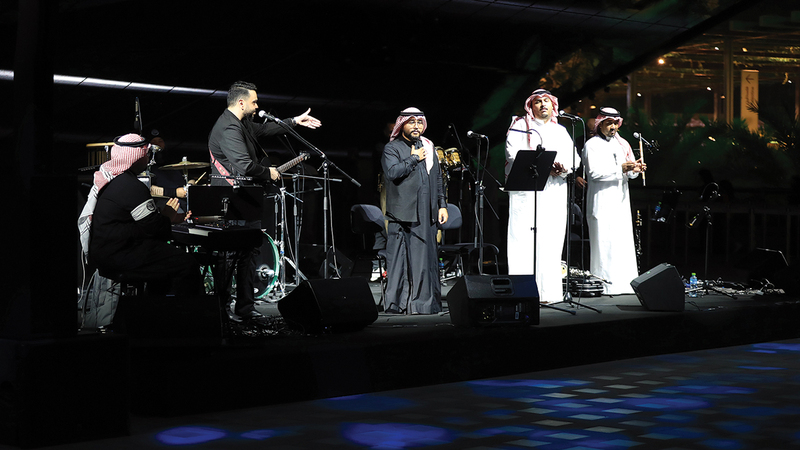 The masterpieces of Al-Mutanabbi and Abu Nawas.. under the "Dubai Expo" tent

A distinctive artistic experience, the members of the “Al-Farabi” musical group succeeded in dedicating its idea to present it, finally, to the “Expo 2020 Dubai” audience, as part of the various daily performances on the agenda of the global event.

The peculiarity of the artistic experience of the “Al-Farabi” troupe, which includes eight members, lies in the adoption of an innovative modern blend, between combined Western melodies and experimental music with the eyes of poems of Arab poetry, created by the most famous Arab poets from different eras.

Over the course of more than an hour and a half, the Expo 2020 Dubai audience and a group of music and poetry lovers enjoyed the most beautiful poems, on various Western musical rhythms this time, which succeeded in attracting many audiences, gourmets and even passers-by, most of whom stopped to discover the details of this unique mixture. From Western musical melodies and Arabic poetry, which in its essence constituted a pioneering artistic step, identified with the meeting of diverse cultures and different nationalities under the tent of the international exhibition "Expo Dubai".

At a time when the classical language songs were almost completely absent from the scene of new works in the Arab world, the “Al-Farabi” band triumphed, to attend the captivating language of “Al-Dhad” in the global event, by performing a selection of works and melodies inspired by the masterpieces of authentic poetry in a different style, in which it attended strongly Al-Mutanabbi’s poems, especially in the first lyrical pieces, aroused the enthusiasm of the audience from connoisseurs of poetry and lovers of Western music, so the band moved to present poems to Imam Al-Shafi’i, Qais bin Al-Malouh, and Abu Nawas.

The band members also performed their first official song called “The Story of a King”, in addition to the song “Amal” from the poems of Imam Al-Shafi’i, before they followed it with the famous poem “If I had two hearts” by Qais bin Al-Malouh, and the poem “I will give you satisfaction” by the poet Abu Nawas.

Al-Farabi members chose to present the first performance of their new song, on the stage of the Saudi Pavilion in the Opportunity District of the “Expo Dubai”, whose words were taken from one of Qais bin Al-Malouh’s poems, in which he says: “Oh, you are the psychiatrist. Her lover,” based on a revamped musical arrangement, prompted the audience to applaud fervently to express their admiration for the work.

At the time, the evening ended with the song "Ya Adel", which is one of the band's most famous songs, which led it to fame among young people in the Arab Gulf region in particular.

For his part, Saudi guitarist Dia Azzouni said, "The idea of ​​merging our poetry with Western music is well received by the Arab listener, and is clearly accepted and approved, especially by the youth."

He explained that the “Al-Farabi” band began to spread among young people in the Kingdom of Saudi Arabia, because of the quality of the music presented, represented by an innovative mixture of western melodies and authentic oriental melodies, which are presented at a consistent pace through free experimental integration.

Azzouni, who is one of the founders of the “Al-Farabi” band, added about the technique of merging eastern and western melodies, which takes place according to the direction of the song, which gives comfort to the listener: “The musical instruments that we use in this context vary, between the oud and the law, while relying on the Violin and cello on some evenings where we perform some types of record music.”

He pointed out that the ideas of musical fusion composed by the band call for different instruments in each show than the previous show.

• 8 members, including the band, which performed at the Kingdom's pavilion at Expo 2020 Dubai.

• "Al-Farabi" concluded the evening with "Ya Adel," which is one of the band's most famous songs that led them to fame among young people in the Gulf.

• “The idea of ​​merging our poetry with Western music is well received by the Arab listener, and is clearly accepted and approved, especially by the youth.”

Since its appearance in 2011, the “Al-Farabi” band has been trying to revive the classical Arabic language and give it a new spirit through music and playing, in which different types of music are combined with words selected from ancient Arabic proverbs and poems.

The band is working on drawing inspiration from the spirit of authentic Arabic poetry to present it in a modern way, to restore the brilliance of the classical Arabic language and elevate its presence among the new generations.

The Saudi band “Al-Farabi” includes eight members who hail from various regions of the Kingdom, such as: Jeddah, Mecca and Medina, led by guitarist Dia Azzouni, along with Saher, the band’s maestro and pianist, and Imad the drummer, while Abdullah plays the wind instrument. And Anas on electric guitar, and Ali on percussion. As for singing, the task of singing was entrusted in the band to singers Azzam and Talal.