I brought together Sisi, bin Zayed and Bennett.. What is behind the tripartite meeting of Sharm el-Sheikh?

The Sharm el-Sheikh meeting between Sisi, Bennett and Zayed was described by the Israeli media as an “unprecedented event” and centered on Iran, while others said it also related to energy and food security issues and the repercussions of the Russian war on Ukraine. 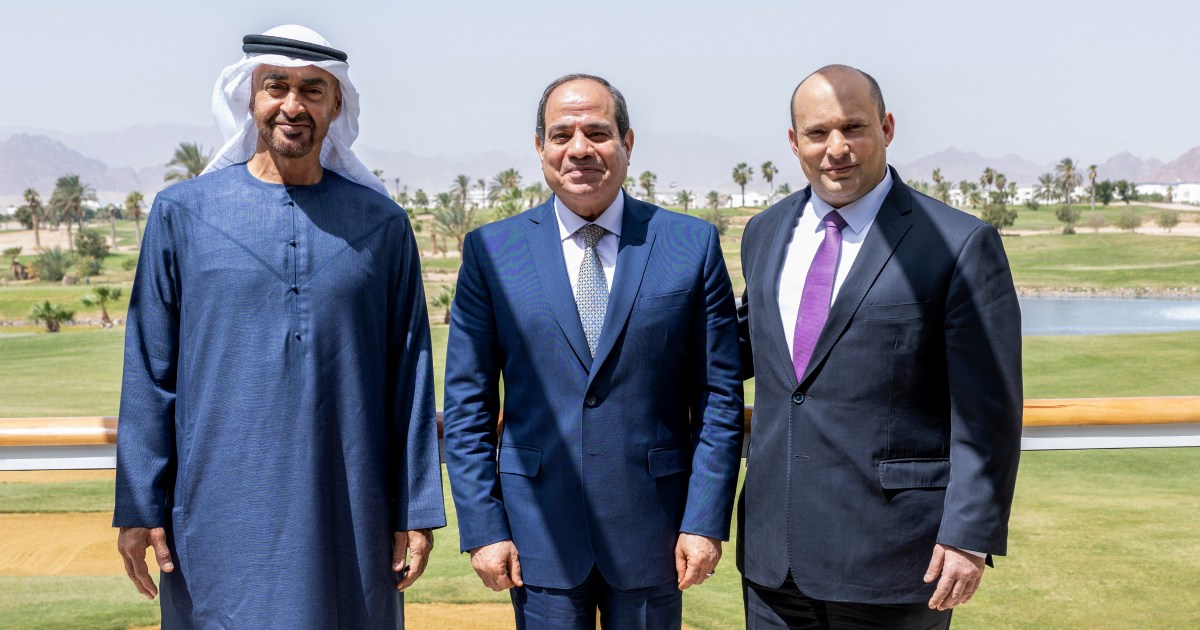 And what Israeli media described as an "unprecedented event", and the Israeli "Channel 13" said that the summit revolves around what it described as the danger of Iran, and other media outlets talked about other issues discussed by the summit, including discussing the economic repercussions of the Russian military operation in Ukraine, and the file of energy and food security. .

For its part, the Egyptian presidency indicated that the meeting discussed energy and food security issues in light of the repercussions of global developments.

A statement published by the Egyptian presidential spokesman said that the meeting dealt with discussions on the repercussions of global developments, especially with regard to energy, market stability, and food security, as well as exchanging visions and views regarding the latest developments of a number of international and regional issues.

For its part, the Israeli Prime Minister's Office said that the three leaders "discussed relations between the three countries in light of the latest global and regional developments and ways to enhance them at all levels."

The official Emirates News Agency stated that the tripartite meeting "dealed with strengthening relations between countries and the importance of cooperation, coordination and consultation to meet the aspirations of development and stability in the region, energy security and stability of global markets."

Commenting on the meeting, political science professor Tariq Fahmy said that there are positive developments in relations between Israel and Egypt, including the establishment of a direct airline between the two countries that would boost tourism.

In televised statements, Fahmy said that the visit of the Israeli Prime Minister to Sharm el-Sheikh for the second time since last September is of great importance within the framework of regional cooperation, moving stagnant water in some regional files, and agreeing on a set of projects and cooperation within the framework of joint relations between Egypt and Israel. and Emirates.

El-Sisi met Bennett last September, at a meeting held in Sharm El-Sheikh, which the Israeli Prime Minister described as very important and very good, pointing out that they laid the basis for deepening ties and promoting interests.

Tariq Fahmy expected that this meeting would open the way for the possibility of repeating such meetings, and the joining of special Arab parties from the Palestinian side, which would serve Arab and regional issues, not just security and cooperation projects.

The Egyptian political analyst pointed out that Cairo is seeking to amend the security protocol of the peace treaty with Israel in 1979, in order to provide Egypt with a more security presence in the Sinai Peninsula.

Last November, the Egyptian military spokesman announced that the joint military committee with Israel had agreed to amend the security agreement, by increasing the number of border guards forces and their capabilities in the border area in the Egyptian Rafah region.

Fahmy explained that the meeting also dealt with cooperation in the field of gas, especially the Egyptian capabilities in liquefying gas and exporting it abroad.

He added that discussions were held regarding the imminent completion of an agreement on the Iranian nuclear file, and Washington's intention to remove the Iranian Revolutionary Guard from the lists of terrorism, which would have repercussions on Arab national security and the region, not just the Gulf.

According to the Anadolu Agency, the Israeli Broadcasting Corporation said that among the topics that come at the heart of the tripartite summit talks is the possibility of raising the quantities of oil exported by the UAE, given the sharp rise in its prices in global markets.

Speaking to Al Jazeera Net, the Egyptian researcher in security and political affairs Ahmed Maulana believes that the visit is linked first to intensifying cooperation in the gas file, so that Israel increases the quantities it supplies to Egypt, and the latter liquidates it, and then sells it to Europe, in light of the European demand for an alternative to Russian gas, and this may It requires developing the infrastructure for liquefaction of gas in Egypt.

The Israeli Broadcasting Corporation said that among the topics that also come at the heart of the tripartite summit talks, the tension between the United States, Egypt and the UAE, in light of the continuation of the Russian war on Ukraine and the rise in wheat prices, and the possibility of raising the quantities of oil exported by the UAE, given its sharp rise in prices. in global markets.

The Israeli authority quoted an unnamed Israeli government source as saying that "the tripartite summit was secretly planned in the past few days."

She added that Israel is also interested in helping Egypt find alternative sources of wheat, in light of the intensification of the Russian-Ukrainian conflict.

In turn, the Director of the International Institute for Political and Strategic Sciences in Istanbul, Mamdouh Al-Munir, expressed his belief that each party will seek to make the most of what the other party has of the cards, as Israel seeks to increase Emirati oil production to ease its prices and use it as a card to threaten the leaders of the United Arab Emirates. The White House against Iran.

The Israeli Broadcasting Corporation quoted the confirmation of an unnamed Israeli diplomatic source that the meeting deals with "the security interests shared by the three countries."

"Israel and the UAE oppose US efforts to remove the name of the Iranian Revolutionary Guard from the list of terrorism to please Iran," the source added.

However, political researcher Ahmed Maulana rules out that Sisi will move within a file related to Iran, unless huge funds are pumped from the Gulf to Egypt, which will contribute to solving the current economic crisis.

Maulana said that Iran represents the first threat to Israel currently, according to the reports of the Israeli agencies, a fear shared by Saudi Arabia and the UAE, and in light of the possibility of removing the Guards from the US terrorism list, the three countries will converge to confront Iran, while Egypt does not view Iran as a priority threat to it.

As for the Egyptian role in the Iran file, Maulana saw it as a symbolic role due to Egypt's numerical and military weight compared to the Gulf states, as its presence in any anti-Iran alliance gives it more weight.

However, the spokesman added, "But this alliance cannot be joined by Sisi, except for a huge return that makes the gain of participation worth undertaking."

On the other hand, Mamdouh Al-Munir confirmed that the Sharm el-Sheikh meeting will not depart from the Iranian file in general and the nuclear agreement in particular, pointing to Abu Dhabi and Tel Aviv's strong opposition to the return of the nuclear agreement with Tehran, and they also oppose the possibility of removing the Biden administration from the Iranian Revolutionary Guards from the US terrorism list.

The work of the summit was considered a message of protest to Washington, describing the newspaper "Israel Today", after the progress of the nuclear talks with Tehran, and the tendency to remove the "Iranian Revolutionary Guards" from the list of terrorism, in exchange for a public pledge from Iran to stop the escalation in the region.

As for the Syrian file, Egypt and the UAE may play a role in mediating between Damascus and Tel Aviv to conduct direct understandings between them away from Iran and Russia, according to Ahmed Maulana, who ruled out discussing any file related to the Palestinian issue due to the absence of a representative of the authority, and the current stalemate in the peace process, And not preoccupation with any of the three countries moved.

In this context, the Israeli Broadcasting Corporation quoted unnamed Israeli political sources that Israel is playing the role of mediator between the UAE and the United States, to calm tensions between the two parties.

According to the radio, the US administration is angry at Bashar al-Assad's visit to the UAE (last Friday), describing it as provocative, as the Americans are boycotting the head of the Syrian regime;

On the other hand, the UAE is angry because it feels that there is a lack of US support on the issue of Houthi attacks from Yemen.

Mohammed bin Zayed and the Prime Minister of "Israel" made two surprise simultaneous visits to Sisi today, unannounced, and the statement of the Egyptian presidency does not mention any specific topic that was discussed or justify the sudden visit. Is it the last attempt to save a sinking boat?!

Al-Sisi, the Zionist Prime Minister and Bin Zayed together in Sharm El-Sheikh today: No less summit..say: a new tripartite aggression against Sinai

The meeting, which included Sisi, Naftali Bennett and Mohammed bin Zayed in Sharm El-Sheikh today, discussed security issues of concern to Israel, did not discuss the Israeli withdrawal from the occupied Arab lands

and did not address Jerusalem, and the meeting was not preoccupied with what is happening in the courtyards of Al-Aqsa Mosque?

A tripartite meeting tomorrow brings together in Sharm El-Sheikh El-Sisi and the Zionist Prime Minister Bennett and Mohammed bin Zayed.

Another reward for Israel for its extremism and aggression and the dedication of its regional presence.

What is the value of this meeting for Egypt, which Bennett and Bin Zayed are cooperating with Ethiopia in building the Renaissance Dam, which is considered the most serious threat to Egypt's national security.

🚨 out of the Israeli intelligence's reassurance of the security of Prime Minister Naftali Bennett, he will spend the night for the first time in #Egypt, in

The tripartite summit represents the latest development in the "Abraham Accords", which saw Israel normalize relations with the UAE, Bahrain and Morocco in agreements concluded in 2020 by the administration of former US President Donald Trump.

This visit comes after the Israeli Prime Minister announced, last Wednesday, an agreement with the Egyptian President to operate a direct flight between Tel Aviv and Sharm El Sheikh, starting from next April.

In previous statements to Al Jazeera Net, commenting on the operation of the air line, Ambassador Abdullah Al-Ashal (formerly Assistant to the Egyptian Foreign Minister) described the agreement as political par excellence, saying that the agreement had nothing to do with tourism, as the Israelis entered the Sinai Peninsula without a transit visa, and therefore it is the result of warmth The political relations that reached their climax during the era of Sisi, and it is in the interest of the Egyptian regime more than in the interest of the state.

In May 2016, Sisi first used the term “warm peace” to describe the desired relations with Israel. “Some say that peace with Israel is not warm, but I say that a warmer peace will be achieved if we (we could) resolve the issue of our Palestinian brothers.” .

Triple summit in Sharm El-Sheikh and a picture in a thousand words 🇦🇪🇮🇱🇪🇬 pic.twitter.com/Ka3CGOEklw

, in light of the progress made in the nuclear negotiations taking place in Vienna between the major powers and Iran.