Can I travel during the Qingming holiday? 48-hour nucleic acid becomes standard for travel in many places

China News Service, Beijing, March 22 (Zhang Yilin) ​​Train tickets for this year's Qingming holiday have been on sale on the 20th. At present, the epidemic situation is spreading across the country, and many regions have upgraded prevention and control measures. Before the Qingming holiday, some important epidemic prevention information must be known before outing or traveling across provinces. 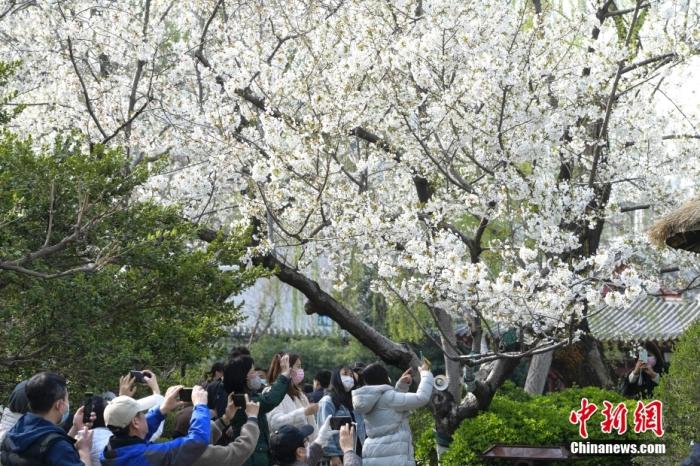 China News Service, Beijing, March 22 (Zhang Yilin) ​​Train tickets for this year's Qingming holiday have been on sale on the 20th.

At present, the epidemic situation is spreading across the country, and many regions have upgraded prevention and control measures. Before the Qingming holiday, some important epidemic prevention information must be known before outing or traveling across provinces.

On March 20, the blooming cherry blossoms in Wulongtan Park in Jinan, Shandong attract tourists to watch and take pictures.

Qingming holiday train tickets on sale on the 20th

This year's Tomb Sweeping Holiday is from April 3rd to 5th, a total of 3 days.

According to the current national railway ticket pre-sale period of 15 days, starting from March 20, the public can buy train tickets for the first day of the Qingming holiday (April 3).

Return (April 5) train tickets can be purchased on March 22.

According to the WeChat official account of "China Railway", in response to the recent occurrence of sporadic cases and local clustered epidemics in some parts of the country, in order to cooperate with local governments to reduce the flow of people, reduce the risk of travel, and reduce the implementation of epidemic prevention and control policies, such as reducing the number of people gathered, The railway department quickly and substantially adjusted the operation of passenger trains and introduced free refund measures for passenger train tickets.

From the 14th, passengers will not be charged a refund fee when refunding valid tickets for all trains purchased before 0:00 on March 15, 2022 at stations, 12306 website and other channels. Do it together.

Many places require travel with a 48-hour nucleic acid certificate

The Qingming Festival is approaching, and people are most concerned about travel.

Affected by the epidemic, travel and epidemic prevention policies have been adjusted in many places. Among them, "48-hour nucleic acid" has become the standard.

For example, Guizhou recently issued a reminder on the prevention and control of the epidemic during the Qingming holiday. People in areas with low risk and no local positive infection report within 14 days are recommended to come to Guizhou with a negative nucleic acid test certificate within 48 hours, and after arriving in Guizhou Carry out a nucleic acid test within 48 hours.

Jilin Province requires that from March 14, the movement of people from Jilin Province across provinces and regions is prohibited.

Qingdao City, Shandong Province proposed on the 12th that it is not necessary to leave Qingqing. Those who really need to leave Qingqing must present a green health code and hold a negative nucleic acid test certificate within 48 hours.

Beijing requires that you must hold a negative nucleic acid test certificate within 48 hours and the green code of "Beijing Health Treasure" when entering (returning) Beijing, and the county (city, district, flag) where there is more than 1 case (including 1 case) of local new coronavirus infection within 14 days ) Persons with a history of travel and residence are strictly restricted from entering (returning) Beijing, and those entering or returning to Beijing must undergo a nucleic acid test within 72 hours after arriving in Beijing.

In addition, people in Beijing will not be out of Beijing in the near future.

Strengthen the management of inbound and outbound tourism.

Citizens should minimize travel activities out of Beijing, and strictly control the number of reservations for scenic spots in Beijing.

Inter-provincial travel is suspended, and the team on the way strengthens epidemic prevention management.

Data map: The people posted "butterflies" on the background board of "Civilization Sweeping Green Qingming", indicating that they would respond to the initiative.

At present, initiatives and notices related to Qingming Festival have been issued in many places, and on-site sacrifice and sweeping activities have been suspended in some areas.

Organizations that provide on-site sacrifice sweeping services should take measures such as making appointments, staggering peak hours, and limiting current to minimize the crowd density of sacrifice sweepers and reduce the gathering of people on the spot.

Shanghai continues to adopt the practice of "extended cycle, staggered guidance, and peak appointments". Citizens who enter the park must show their health code, itinerary code, and a negative nucleic acid test certificate within 48 hours.

The Xiqing District of Tianjin issued a notice requesting that from now on, funeral service agencies such as cemeteries and columbariums in the region suspend the on-site sacrifice and sweeping services, and the recovery time will be notified separately.