Mysterious ancient ruins in Britain... and the effects of 1500-year-old industrial workshops! 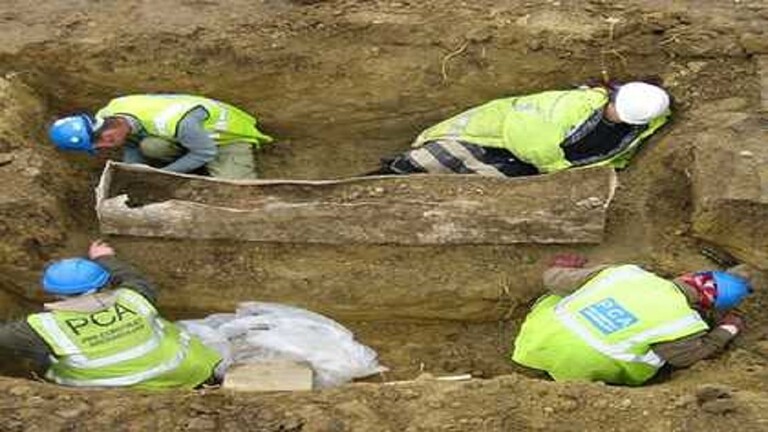 Mysterious ancient ruins in Britain... and the effects of 1500-year-old industrial workshops!

Archaeologists in the county of Kent have found an unidentified mausoleum and traces of 1,500-year-old industrial silver mining.

But what is interesting is that they did not find any necessary infrastructure for this operation.

During drilling operations in the Grange field near the city of Gillingham, scientists found a record amount of 15 kilograms of litharg (lead monoxide), a substance that is a by-product when extracting silver from lead ores.

This quantity indicates that the ore was processed on an industrial scale.

The researchers discovered the ruins of a rectangular building built of wood with three corridors.

These buildings were widespread in the Roman era and were used for housing and workshops for craftsmen, but the traces of metalwork that were found in the place are not commensurate with the size needed to obtain the quantity of litharge found in the same place.

In addition to this, researchers discovered a stone mausoleum built at the end of the third or early fourth century AD, whose height is equivalent to a two-story building.

The floor of the mausoleum is covered with a mosaic of red tiles.

They also found a lead coffin inside the remains of an old woman.

Radiocarbon dating has shown that she was buried at the time the mausoleum was built, but nothing has been found regarding her personality.

In addition to these discoveries, scientists found, according to "Russia Today", 453 metal coins, more than 20,000 pieces of earthenware, and eight thousand pieces of animal bones.

By the 5th and 6th centuries, the Grange Farm was no longer a permanent settlement.

However, experts have found a number of early Anglo-Saxon objects, including two heads of spears (spears were commonly used as a feature of Anglo-Saxon burial rituals) and an ornate brooch.

But they found no evidence to suggest that Grange Farm was used as a settlement or as a burial site at the time.