China News Service, March 19th, a comprehensive report, recently, many countries announced to relax entry and exit restrictions, and those who have been fully vaccinated will be exempt from quarantine. Some countries have even cancelled nucleic acid testing on entry for fully vaccinated people. On January 29, local time, as many as thousands of people protested against the government's new crow 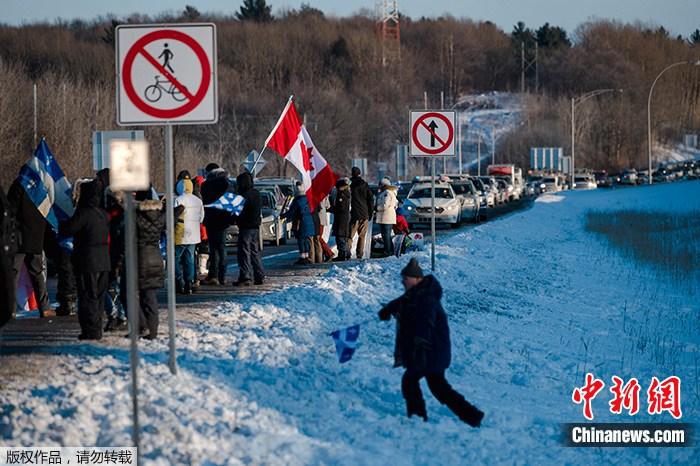 China News Service, March 19th, a comprehensive report, recently, many countries announced to relax entry and exit restrictions, and those who have been fully vaccinated will be exempt from quarantine.

Some countries have even cancelled nucleic acid testing on entry for fully vaccinated people.

On January 29, local time, as many as thousands of people protested against the government's new crown restrictions in Ottawa, the capital of Canada.

Canada: No test report required for entry from April

The Canadian government announced on March 17 that from April 1, people who have received a full dose of the new crown vaccine will no longer be required to provide a virus test report when entering Canada.

However, any inbound personnel may still need to be randomly selected for molecular testing of the virus at that time.

Passengers do not need to be quarantined while waiting for the results of the random test.

The British government announced on the 14th that from 4:00 a.m. on March 18, all entry restrictions imposed on the new crown will be lifted, and all passengers entering the UK will no longer need to undergo an entry new crown test or fill out a "passenger location form".

New Zealand's Prime Minister announced on the 16th a new plan to open the border.

Inbound visitors are required to receive two doses of the COVID-19 vaccine and to provide a negative COVID-19 test report before boarding.

Eligible tourists can enter without quarantine.

Greece: Exemption from nucleic acid testing for entrants from some countries

According to an announcement issued by the Greek Civil Aviation Authority, from March 15, passengers arriving in Greece from abroad will no longer be required to fill out a "Passenger Locator Form" (PLF).

The new version of the entry regulations also exempts passengers from some countries from the obligation to undergo nucleic acid testing after arriving in Greece.

All travelers from EU member states, countries in the Schengen area, and 35 non-EU countries and regions that have joined the EU Digital Corona Pass (EUDCC) system can be exempted from compulsory testing by presenting relevant health documents when entering Greece.

On March 17, 2022, local time, in Fukushima, Japan, people line up to collect water due to the interruption of water supply caused by the earthquake.

Japan: Further relaxation of restrictions on the number of people entering the country

Japanese Prime Minister Fumio Kishida said on the 3rd that entry restrictions will be further eased from the 14th, and the daily limit on the number of people entering the country will be increased from 5,000 to 7,000.

According to Kyodo News, the Japanese government also plans to further ease entry restrictions, possibly increasing the daily limit to 10,000 people from April.

Malaysian Prime Minister Ismail Sabri announced on the 8th that Malaysia will reopen the country on April 1, and all those entering the country who have completed the vaccination do not need to be quarantined.

He also pointed out that the Malaysian government stipulates that people entering the country from abroad must be tested for the new crown virus two days before departure and within 24 hours after entry.

Singapore will further simplify entry testing procedures from the 14th. Passengers from countries and regions with the first risk level and entering Singapore through the Vaccine Travel Channel (VTL) only need to complete the rapid antigen test within 24 hours of entry. The inspection needs to be completed under the supervision of a special person.

Vietnam reopened its borders on the 15th and announced the resumption of visa-free policies for citizens of 13 countries.

On March 16, a new store of a chain coffee shop opened in a shopping mall in the Makati business district of the CBD of Manila, the capital of the Philippines. A mother and daughter bought snacks.

The Philippine government announced on the 16th that it will further relax the entry restrictions for foreigners from now on, allowing citizens of non-visa-free countries and regions who have fully vaccinated against the new crown vaccine to enter.

The BI said in a statement that citizens from non-visa-exempt countries and regions need to hold a valid visa, a new crown vaccination certificate, and a nucleic acid negative certificate within 48 hours before departure and other documents when entering, and self-monitoring is required after entry7 sky.

Vaccinations are not mandatory for children under the age of 12, but must be accompanied by their parents.