His Highness Sheikh Hamdan bin Mohammed bin Rashid Al Maktoum, Crown Prince of Dubai, was briefed on the general framework of the preparations of the Japanese city of Osaka to host the next edition of the World Expo, which is scheduled to take place from April 13 to October 13 in the year 2025, on the island of 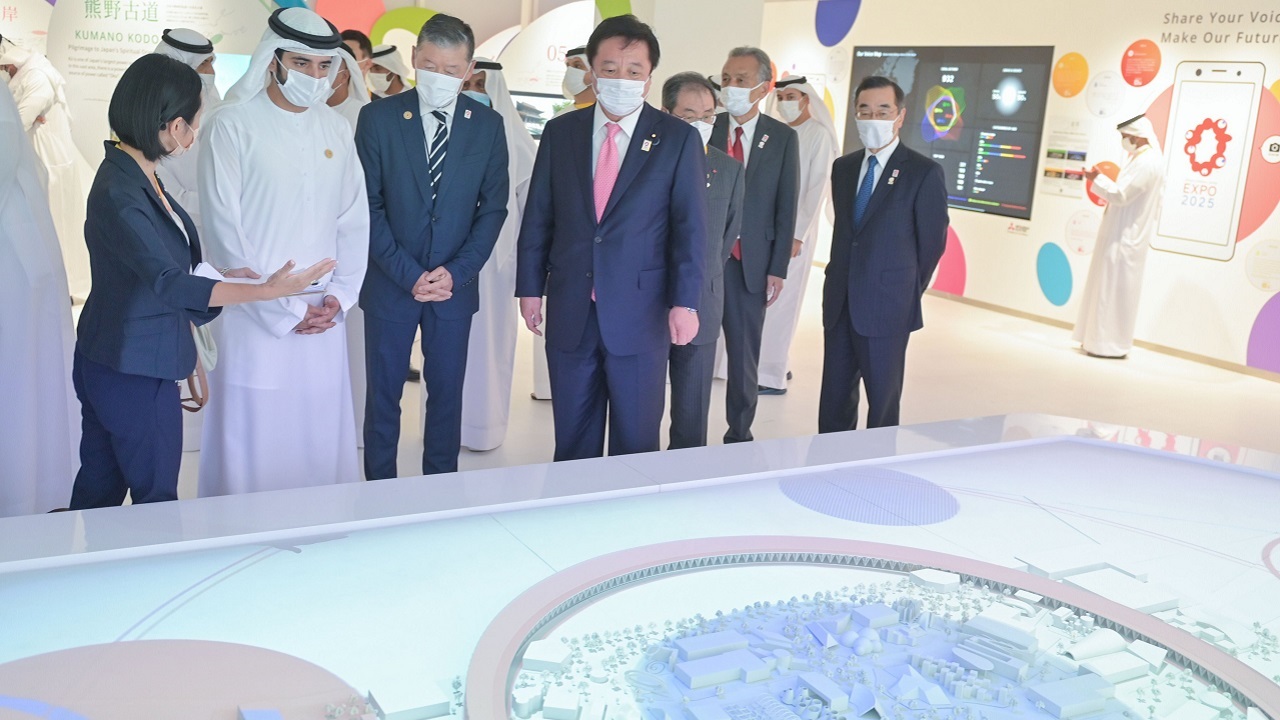 His Highness Sheikh Hamdan bin Mohammed bin Rashid Al Maktoum, Crown Prince of Dubai, was briefed on the general framework of the preparations of the Japanese city of Osaka to host the next edition of the World Expo, which is scheduled to take place from April 13 to October 13, 2025, on Yomshima Island. Osaka hosted the Expo for the third time, after hosting the event in two previous sessions in 1970 and 1990.

This came during the visit of His Highness the Crown Prince of Dubai to the Japan Pavilion at Expo 2020 Dubai today, Saturday, where His Highness met with His Excellency Kenji Wakamiya, Minister of Expo in the Japanese government, who reviewed the outlines of Osaka's preparations to receive the major global event, which it won through a vote conducted by the office The International Exhibition of Exhibitions in Paris in November 2018, where the vote came to Osaka, defeating both the Russian city of Yekaterinburg and the Azerbaijani capital, Baku.

During the meeting, His Highness was briefed on an illustration of Expo Osaka 2025, and listened to an explanation of the components to be included in the exhibition in its next edition, as Japan expects the participation of about 150 countries and 25 international organizations, while pavilion officials explained that preparations have already begun from Expo 2020 Dubai, where An operations room was set up at the Japan Pavilion at the exhibition, with the aim of benefiting from the solutions and ideas proposed during this session, to contribute to shaping the features of the next edition of the Expo with its being held in Osaka.

At the conclusion of the visit, His Highness Sheikh Hamdan bin Mohammed bin Rashid Al Maktoum expressed his confidence that the next edition of the "Expo" will be of great distinction, based on the high position that Japan enjoys at the international level, and the qualitative achievements it has achieved today in various fields. The fields have attracted the admiration and appreciation of the world, giving themselves an advanced position in the field of development and global development.

His Highness praised the comprehensive vision in which Osaka is preparing to host the major global event, expressing his hope that Dubai's experience in hosting the Expo, in an exceptional session, is the largest in the history of the ancient exhibition, which dates back to the year 1851, a source of inspiration for new and creative ideas that support Expo Osaka 2025. His Highness wished all success to the friendly country of Japan, and to the city of Osaka in achieving hosting a great deal of distinction and success.

His Highness also stressed that the UAE will spare no effort in presenting visions or ideas that contribute to the success of the next versions of the Expo, and that Dubai, after hosting the event for the first time in the Middle East, North Africa and South Asia in its more than 170-year history, will continue to support The objectives of the Expo seek to benefit the various peoples of the world and move them to a better future full of opportunities and devoid of challenges.