The Pope jokes with Isabel Celaá when presenting her credentials as ambassador: "Thank you for coming with a comb"

The Pope joked this Friday with the new Spanish ambassador to the Holy See, Isabel Celaá, who presented her credentials at a formal audience at the Palace... 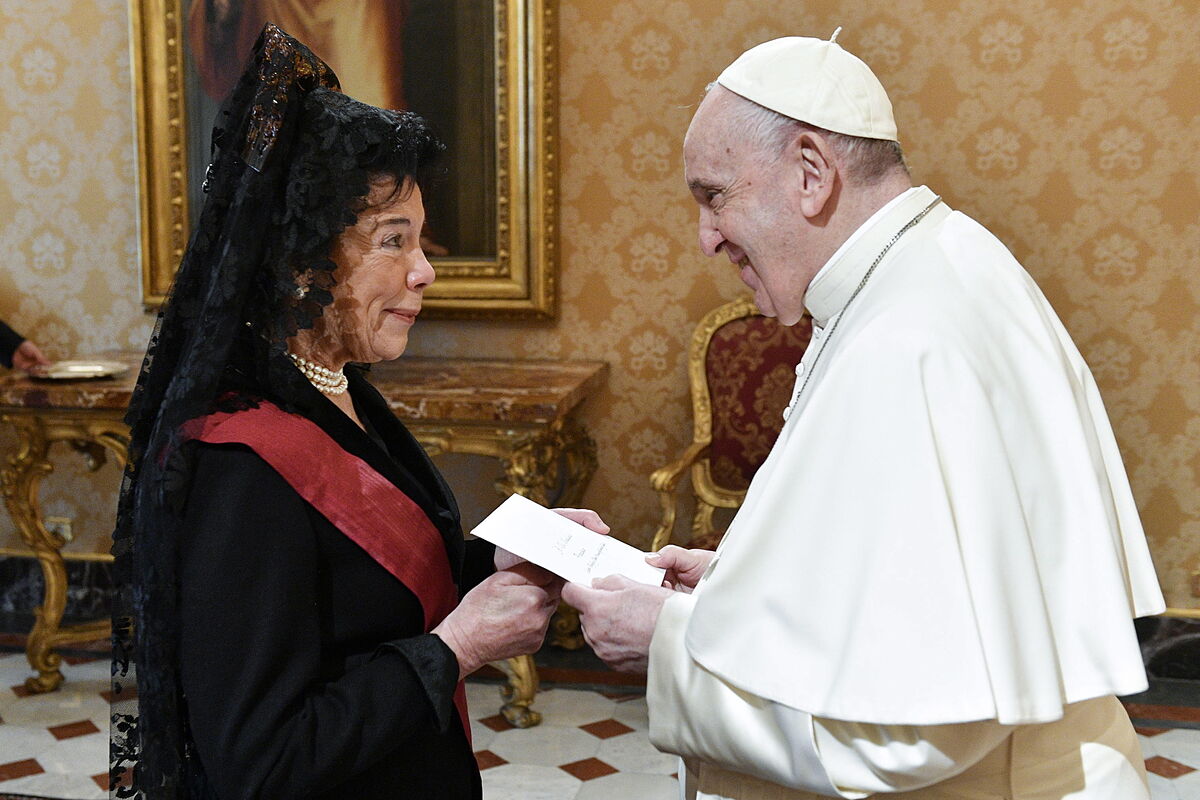 The Pope joked this Friday with the new Spanish ambassador to the Holy See, Isabel Celaá, who presented her credentials at a formal audience at the Vatican Apostolic Palace, which officially marks the start of her diplomatic representation.

"Thank you very much for coming with the comb!", the Pontiff snapped at him with a smile after Celaá -who was dressed in rigorous black, as required by protocol, and with a mantilla- showed him the credentials that accredit her as Ambassador of Spain to the Holy See, as can be seen in a video released by Rome Reports.

The Vatican press office has not issued a statement of the audience as is usual in these cases.

On the other hand, the communication department of the diplomatic legation based in the Plaza de España has issued a note in which it appreciates that the meeting with the Pope has lasted about thirty minutes, and has begun with the formal greeting in the so-called Sala del Throne.

The new ambassador has gone with her family to the appointment in the Vatican and has introduced the Pope to her husband, her two daughters and some relatives, as well as the diplomatic staff of the embassy.

Celaá presented the Pontiff with a rosary from the Cartuja de Burgos and a small statue of the bust of Saint Ignatius, from a Jesuit community in the Basque Country.

As usual, the Pope, for his part, has given him a copy of his main magisterial texts, as well as a blessed rosary.

In the statement from the Spanish embassy to the Holy See he realizes that the meeting with the Secretary of State, Cardinal Pietro Parolin, has been postponed when the Italian cardinal and right-hand man of the Pope is outside of Rome.

Before presenting credentials to the Pope at the embassy of the Holy See, Celaá presided over an act at the Spanish embassy to the Holy See on March 8, Women's Day, in which he vindicated the value of women who flee from the Ukrainian war.

"I choose or we choose to evoke also and above all all those women who with great suffering are dragging their children and their suitcases throughout Central Europe, fleeing from war and death," Celaá declared before the people gathered in the Palace that houses the diplomatic legation in the central Plaza de España in Rome.

With a degree in Philosophy and Letters/English Philology and in Law, Isabel Celaá is a former Minister of Education and a former Government spokesperson.

She has also been a deputy for the PSOE in the Congress of Deputies in the XIII and XIV Legislatures and a parliamentarian for the same party in the Basque Parliament.

The ideasFrom the pistols to the Parliament: the triumph of the "abertzale" strategy