The children of Princess Mary, wife of the Crown Prince of Denmark, appeared in a rare television interview, mocking their mother's Australian accent, while speaking in broken Danish, and the interview was shortly before her fiftieth birthday. Her Royal Highness was the Marketing Director 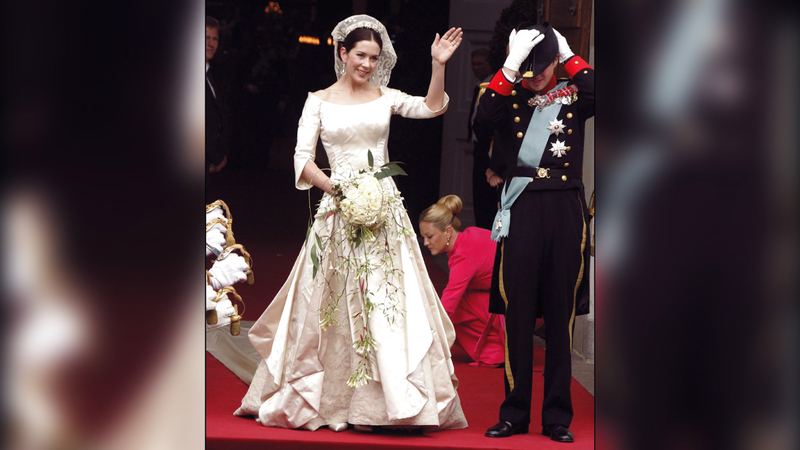 Because she is of Australian descent

Princess Mary at her wedding.

The children of Princess Mary, wife of the Crown Prince of Denmark, appeared in a rare television interview, mocking their mother's Australian accent, while speaking in broken Danish, and the interview was shortly before her fiftieth birthday.

Her Royal Highness was a marketing director for an advertising company when she met Crown Prince Frederick in a bar, during the 2000 Sydney Olympics.

She moved to Europe in 2001, and married three years later to the prince, which made her seek to learn the Danish language in preparation for her new life in leading a country.

But according to her eldest daughter, Princess Isabella, 14, her efforts are not entirely successful, and her Danish speaking proficiency is below par, compared to native Danish speakers.

'She has an Australian accent,' the little girl says, 'so there are some words that she pronounces a little bit funny.'

And her son, Prince Christian, 16, adds: "Sometimes, if she wants to say, 'Put the dog in his basket,' her expressions are taken to mean that the dog is lying on his hook."

Her son Vincent, 11, said she was trying to learn the pronunciation at home, while his twin sister Josephine laughed sarcastically at her mother's pronunciation of Danish words.

Despite these taunts, the sons honored their mother on her fiftieth birthday, describing her as a very hardworking worker, constantly reminding them of how lucky they were to live under her in Denmark.

Despite living in Denmark on the other side of the world, Princess Mary paid tribute to her Australian roots by sending a special gift of $50,000 to the Alanna and Madeleine, an Australian foundation, which inspired the royal family to start an anti-bullying program in Europe.

The Princess launched the Mary Foundation in 2007 using money she and Prince Frederick received as a gift at their wedding in 2004, drawing on the Anna and Madeleine Foundation's Better Buddies Program, Australia, to start the Freedom from Bullying initiative.

Princess Mary said at the time: "From my first experience with Peter Buddies, I was able to realize that this approach had proven successful in terms of creating communities and teamwork among children."