NASA's future lunar rocket makes its baptism... from the air

NASA's new giant rocket is due to make its first trip to a launch pad on Thursday before a battery of tests which, if successful, should lead it to fly to the… 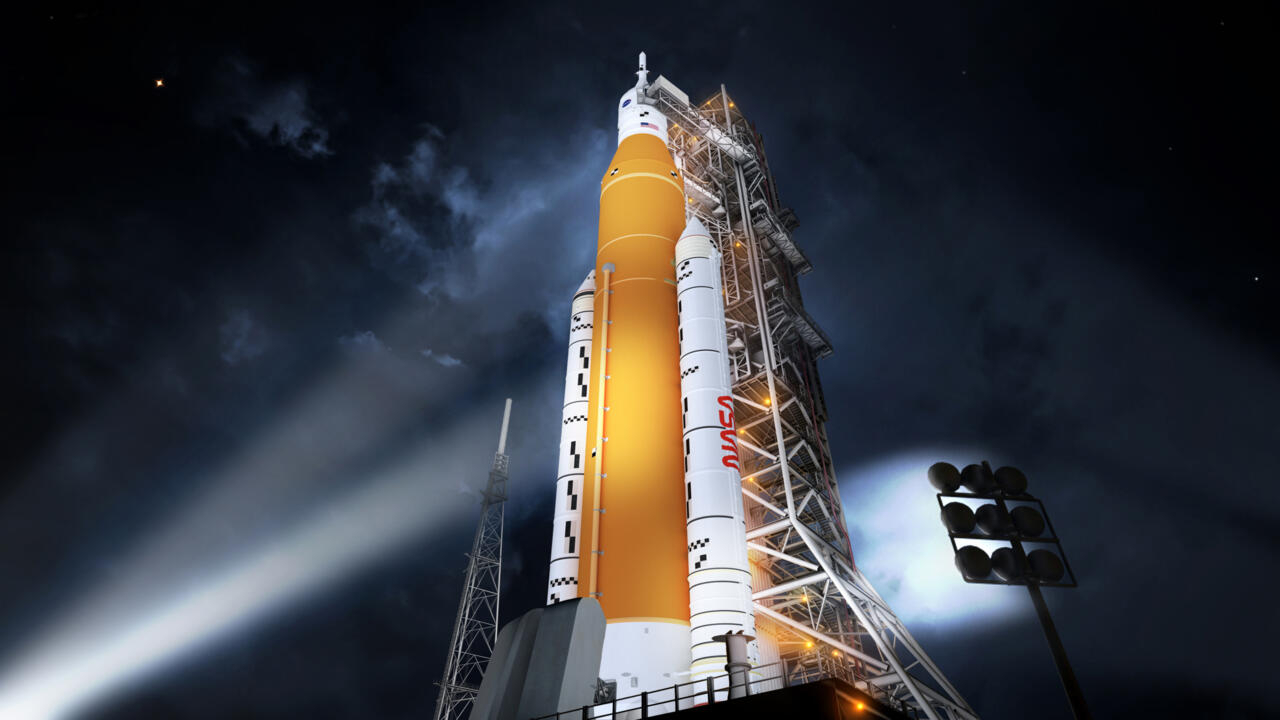 The SLS rocket will leave the assembly building at the Kennedy Space Center in Florida at 5 p.m. (2100 GMT) and will take eleven long hours to reach, carried by a huge tracked vehicle, the legendary launch complex 39B, located just over six kilometers further.

With the Orion capsule attached to its tip, the SLS rocket rises 98 meters in height, taller than the Statue of Liberty, but slightly less than the 110 meters of the Saturn V rocket that sent Man on the Moon during the Apollo missions.

SLS will produce 39.1 meganewtons of thrust, however, 15% more than Saturn V, making it the most powerful rocket in the world today.

"It's a symbol of our country," Tom Whitmeyer, a senior NASA official, told reporters this week.

A symbol, however, accompanied by a bill of 4.1 billion dollars per launch for the first four Artemis missions to the Moon, pointed out the inspector general of the American space agency, Paul Martin, before Congress this month. .

Once the launch pad is reached, engineers will have about two weeks to conduct a battery of tests before a pre-launch dress rehearsal.

On April 3, the SLS team will load more than three million liters of cryogenic fuel into the rocket and repeat each stage of the countdown until the last 10 seconds, without firing the engines.

The rocket will then be drained of fuel to demonstrate a safe aborted launch.

To the Moon and Beyond

NASA is targeting a first launch window in May for Artemis 1, an unmanned lunar mission that will be the first to combine the SLS rocket and the Orion capsule.

SLS will first place Orion in low Earth orbit before, thanks to its upper stage, performing a "trans-lunar injection".

This maneuver is necessary to send Orion more than 450,000 km from Earth and nearly 64,000 km beyond the Moon, farther than any other habitable spacecraft.

During its three-week mission, Orion will deploy ten satellites called CubeSats, the size of a shoebox, which will collect information about deep space.

The capsule will travel to the far side of the Moon using its thrusters provided by the European Space Agency (ESA), then return to Earth.

Its landing will take place in the Pacific, off the coast of California.

We will have to wait for Artemis 2, scheduled for 2024, to see a manned test flight.

The capsule will then circumnavigate the Moon, without landing there, while Artemis 3, now scheduled for 2025 at the earliest, should see the first woman and the first person of color set foot on the lunar ground, at the south pole of the satellite.

NASA wants to test on the Moon certain technologies that it wishes to use during its future missions to Mars, in the 2030s.

The commissioning of SLS should allow it to join the category of "super heavy" launchers, for the moment only made up of Space X's Falcon Heavy, which is smaller than SLS.

However, Elon Musk's company is developing another rocket for deep space: Starship, which is fully reusable and which the billionaire said would be ready for an orbital test this year.

Starship would be both larger and more powerful than SLS: 120 meters high, it would be able to develop more than 75 meganewtons of thrust.

It would also be much cheaper.

According to Elon Musk, within a few years the cost per launch could be reduced to $10 million.

But direct comparisons between the two rockets are complicated by the fact that SLS is designed to reach its final destination directly, while SpaceX plans to place a Starship rocket into orbit, then resupply it with another Starship rocket, to extend its reach. and its payload.

Nasa has also contracted with SpaceX for a version of Starship that would be used as a lunar descent vehicle for Artemis.