The number of local cases in the mainland has exceeded 3,000, and all passenger stations in Shanghai have been suspended since the 14th

(Fighting against New Coronary Pneumonia) The increasing number of local cases in the mainland exceeds 3,000 and all passenger stations in Shanghai have been suspended from the 14th   China News Agency, Beijing, March 13. Comprehensive news: China's National Health Commission announced on the 13th that there were 1,938 new confirmed cases in mainland China on the 12th, including 131 imported case 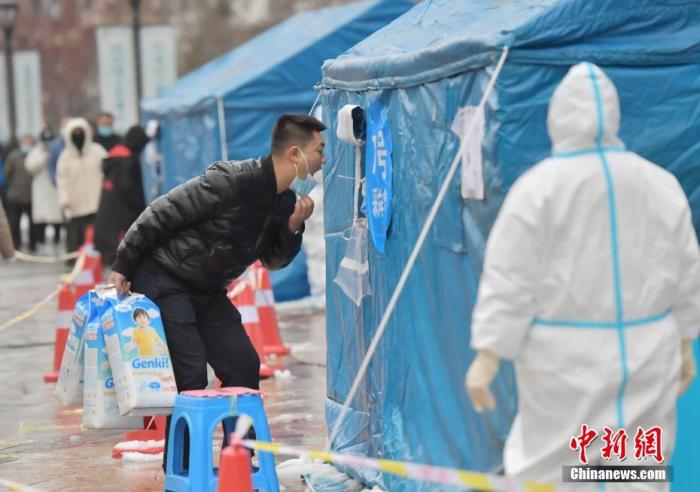 (Fighting against New Coronary Pneumonia) The increasing number of local cases in the mainland exceeds 3,000 and all passenger stations in Shanghai have been suspended from the 14th

China News Agency, Beijing, March 13. Comprehensive news: China's National Health Commission announced on the 13th that there were 1,938 new confirmed cases in mainland China on the 12th, including 131 imported cases and 1,807 local cases.

There were 1,455 new asymptomatic infections, including 140 imported cases and 1,315 local cases.

On the same day, the Jilin Provincial Health and Health Commission notified that from 0:00 to 24:00 on March 12, there were 1,412 new local confirmed cases and 744 new local asymptomatic infections in the province.

Changchun City is continuing to carry out a new round of nucleic acid testing for all employees.

The daily increase of local cases in mainland China exceeded 3,000. The local epidemic spread to 26 provinces within a week

The new asymptomatic infections came from 14 provinces, of which 3 provinces exceeded 100 cases: 744 cases in Jilin, 194 cases in Guangdong, and 172 cases in Shandong; 5 provinces and cities reached double digits: 64 cases in Shanghai, 40 cases in Hebei, and 36 cases in Gansu , 20 in Yunnan and 19 in Jiangsu.

According to official reports from various places, in the past week, local cases in mainland China have spread to 26 provinces.

Jilin added 2,156 new local cases in a single day, the official explanation for the surge in cases

Jilin Province held a press conference on the 13th to report that the province added 2,156 local cases on the 12th (1,412 confirmed cases and 744 asymptomatic infections).

Among them, the newly confirmed local cases in Changchun City (831 cases) exceeded that of Jilin City (571 cases).

As of 24:00 on the 12th, Jilin Province has reported a total of 2,052 local confirmed cases and 1,527 asymptomatic infections in this round of epidemic.

In response to the surge of local cases in Jilin Province on 12 days, the Jilin Provincial Health and Health Commission stated that this is because the Omicron virus is hidden, highly contagious, and spreads fast. It is difficult to detect in the early stage, and it is easy to form community transmission.

The province carried out large-scale nucleic acid testing in the early stage, and hidden potential infections in the community were discovered.

On the other hand, it reflects the lack of preparation in the face of the rapidly rising epidemic situation in individual regions, the lack of understanding of the characteristics of the Omicron virus and the severe and complex epidemic situation, and the inaccurate research and judgment.

According to the Jilin Health and Health Commission, Jilin is currently promoting the anti-epidemic work with the strength of the whole province, and has established 14 special work classes headed by provincial leaders. The province's isolation and transportation, nucleic acid testing, and medical treatment have been further strengthened.

Six transmission chains appear in Beijing epidemic. All passenger stations in Shanghai will be suspended from the 14th

Beijing held a press conference on the 13th, saying that from 16:00 on the 12th to 15:00 on the 13th, Beijing added 6 local confirmed cases and 2 asymptomatic infections, of which 4 were from a family cluster epidemic.

Beijing officials said that since March 7, a total of 30 local cases have been reported in Beijing, involving 5 districts, showing a wide range of features, 6 chains of transmission, and there have been secondary cases, and many family infections have occurred. and dinner party infection, is currently in a critical period of epidemic control.

As of the afternoon of the 13th, Shanghai reported 6 more local confirmed cases and 55 local asymptomatic infections.

According to the latest report, in order to cooperate with the epidemic prevention and control work, all passenger stations in Shanghai will suspend operations from March 14.

Chongqing reported on the 13th that as of 17:00 on the same day, Chongqing had reported a total of 12 local confirmed cases and 2 asymptomatic infections, all of whom were students from a vocational college in Chongqing.

The Chongqing Center for Disease Control and Prevention stated on the 13th that after comprehensive analysis and judgment, the epidemic in Chongqing was a local clustered epidemic caused by an imported case from outside the city. The virus sequences of the Mudanjiang epidemic in Heilongjiang, the epidemic in Jilin City, Jilin Province, and the epidemic in Kunming, Yunnan are 100% homologous.

The situation of the epidemic situation in Laixi, Qingdao is improving.

From March 4 to 12:00 on March 13, Qingdao Laixi reported a total of 692 local confirmed cases and 925 asymptomatic infections.

Among the confirmed cases, 404 were students, 42 were teachers, and 246 were key groups.

The Shandong Provincial Center for Disease Control and Prevention said on the 13th that the number of asymptomatic infections in Laixi City, Qingdao has dropped significantly, and the situation of epidemic prevention and control is improving.

According to reports, the current round of epidemic in Shandong is developing rapidly, because the pathogen of new coronary pneumonia is mutating, the infection chain of this round of epidemic is extremely complex, the place and crowd are special (in confined spaces such as schools and bathrooms), There are many reasons for the lack of practical experience in the prevention and control of Mikron mutants.

Hangzhou City reported on the 13th that from March 9th to 8:00 on March 13th, a total of 52 local confirmed cases were reported in Hangzhou in this round of epidemic. Among them, 49 local staff in Hangzhou at a express delivery terminal in Yuhang District have been diagnosed, and the epidemic has spilled over to Deqing in Huzhou, Haining in Jiaxing, Zunyi in Guizhou and other places in the province.

The Hangzhou Municipal Health Commission stated that there is still the possibility of secondary cases among the employees who have been quarantined in the current round of express delivery epidemic in Hangzhou.

At the same time, since a large number of employees live outside the logistics park, some even in other districts and counties, it cannot be ruled out that the epidemic may spread to the community.

Dense production areas, employee families, and other groups of people who are in close contact with the express company's employee trajectory are all at risk of transmission.