Students in Sharjah: The school day begins in the morning and ends in the afternoon

Parents of students in private schools in Sharjah confirmed that the school hours, which extends from seven in the morning until after three in the afternoon, cause the students to suffer greatly and lead to poor concentration. They pointed out that the school day begins at five in the morning, because students wake up at this time waiting 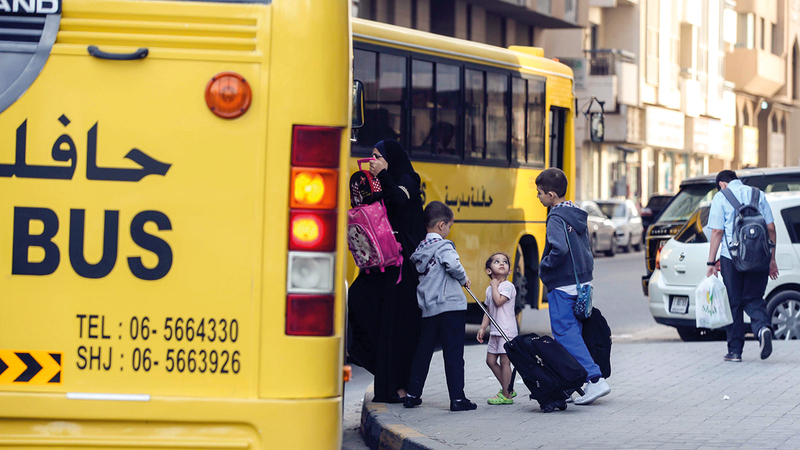 Students in Sharjah: The school day begins in the morning and ends in the afternoon

Parents of students in private schools in Sharjah confirmed that school hours extending from seven in the morning until after three in the afternoon, cause the students to suffer greatly, and lead to poor concentration.

They pointed out that the school day begins at five in the morning, because students wake up at this time to wait for the school bus, and then return to their homes after four in the afternoon, which means that their school day extends for about 11 hours.

The Sharjah Private Education Authority has identified four procedures for implementing the school day, and each private school in the emirate has the right to choose what suits it and apply it, after implementing the decision to adopt three days (Friday, Saturday and Sunday), a weekly holiday.

Huda Salah (a student’s mother), said that students leave their homes at half past five or six in the morning, before sunrise, and return from their schools after four in the afternoon, adding that they feel tired and tired because of their long school day, and they may not eat lunch after their return, because they prefer Falling asleep from fatigue.

Omar Muhammad (the father of two students) stated that the distance between his home and school does not take more than 20 minutes by car, but that the school bus takes more than an hour and 40 minutes to deliver his two sons home at the end of the school day.

He stated that he and his wife are employees, and one of them cannot take their two sons to school, forcing them to participate in the school bus, noting that families live in the winter months in a state of constant anxiety, especially in the morning period, which usually witnesses dense fog during the early morning hours.

Ahmed Jamal (the father of a student) stated that his daughter is in the fifth grade, rides the school bus at dawn, and returns home after three in the afternoon, continuing that this is unreasonable because the timing is not appropriate, and at the same time school fees and school bus fees are high compared to the offered service. .

He explained that the school bus trip that takes his daughter to school starts in front of his residence, and then his daughter is the first student to board the bus, pointing out that this causes him to be in a constant state of anxiety until she reaches school.

In implementation of the decision to adopt three days a week off in Sharjah, the Sharjah Private Education Authority stated that private schools in the Emirate of Sharjah have the right to apply one or a number of specific procedures, as it deems appropriate to modify their schedules and working times in line with their privacy and the requirements of their curricula.

The circular mentioned the four procedures, the first of which is the right of private schools to increase the length of the school day and to modify their study schedules and the duration of the class as they see fit, in a manner that fulfills the requirements of the curriculum followed and without reducing the number of lessons scheduled for each subject, and the second for private schools is entitled to add a maximum of three hours per week by applying the learning system Remotely, after the end of the school day, in line with the objectives and requirements of the curriculum.

The circular added that the third measure: Private schools have the right to increase a maximum working week over the number of days of the current academic year, either by converting the flexible leave week granted to schools in the approved school calendar, into school days, or extending the current school year for an additional working week before the start of Summer vacation, and the fourth: Private schools that apply the Ministry of Education curriculum adhere to the timetable set by the Ministry regarding assessment and exams, and they have the right to apply appropriate procedures to modify their study schedules.

The authority indicated that the specific procedures came after meeting and consulting with representatives of private schools in Sharjah, and reviewing the requirements of the various curricula, and the mechanism for implementing the four-day-a-week system, and to ensure a smooth transition during the current academic year.

• The Sharjah Private Education Authority has identified 4 procedures for implementing the school day.