The great significance of the acts committed by members of Latino gangs has caused the Security Forces and Corps to have released a manual with the elements... 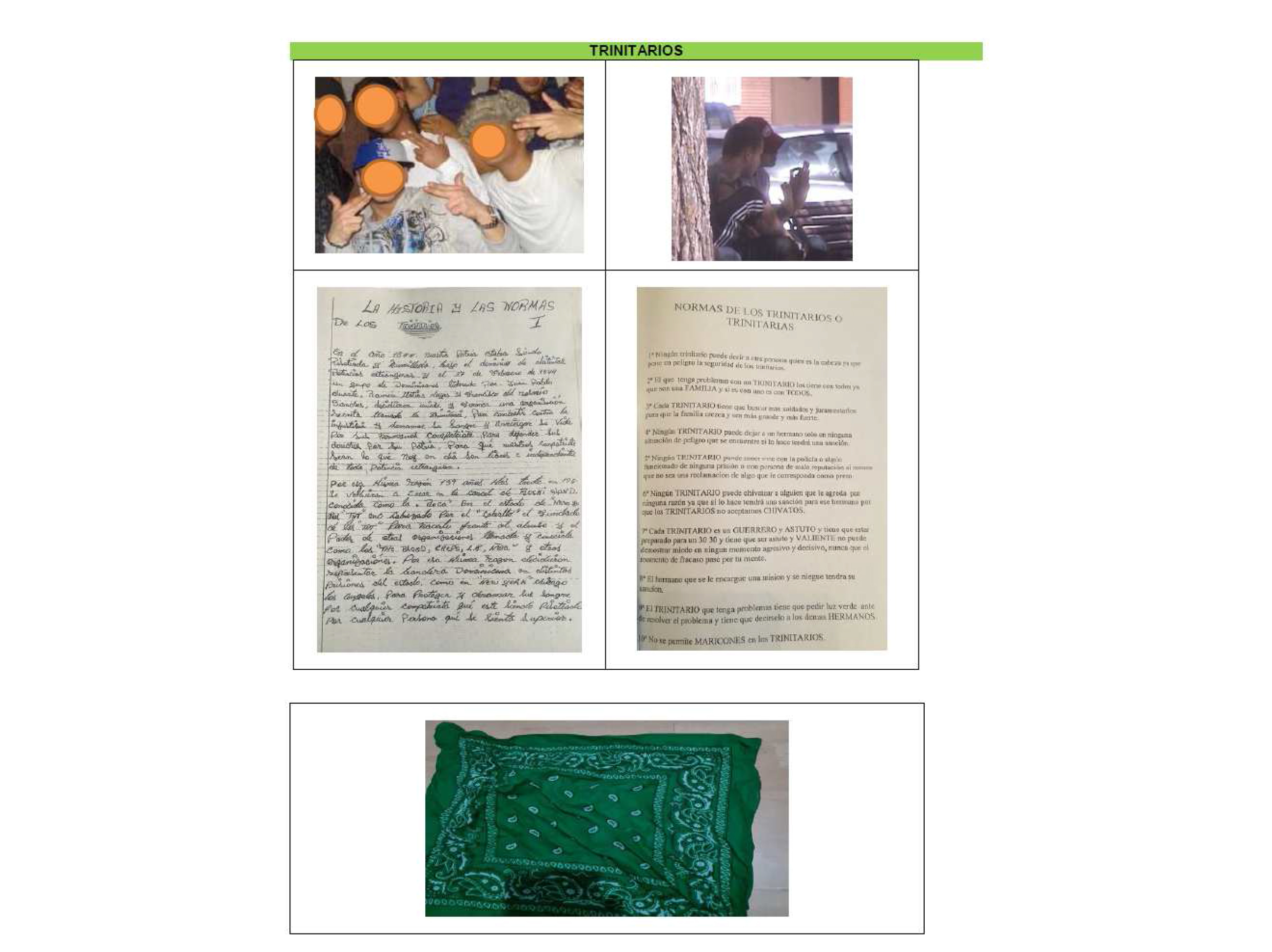 a manual with the characteristic elements of their members to

know how to distinguish them from those who, due to their similarity, may end up stigmatized.

With the use of colors in clothing, gang members show belonging to an organization, thus differentiating themselves from other rival gangs;

on many occasions they try to avoid using these colors when they are going to commit the different criminal acts and they camouflage themselves more and more.

, ankles or protruding from one of their pockets.

Necklaces or rosaries of the band's own colors are also used, through which they can be identified and represent the position they hold within the organization.

The use of codified language is also frequent, both with words or acronyms and with numbers,

to refer both to the position they hold within the gang and to give orders for actions to be carried out.

Similarly, the order of the syllables of the words is altered, according to the Civil Guard.

Through hand sign language, the members of the gangs can communicate,

each gang being differentiated by these gestures

through the different position of the fingers.

In addition, they continue to meet in leisure areas, parks or vacant lots to carry out illicit activities or to organize themselves, which is understood by making the so-called choirs / chapters or chapter.

In these meeting places they usually keep the weapons they use for their criminal acts.

They still have bosses, their own literature and rules, but they are much more flexible than their predecessors in the Community of Madrid and their character is more anarchic.

continue to be very territorial

and have an iron discipline and even punishments for non-compliance.

These are the symbols, tattoos or signs that give them away.

Together with the DDP, they are the largest gang.

They arise in the Dominican Republic.

They are identified by the color green and a clover.

They call themselves Trinis and TNT.

They make a very significant gesture with their hands by pulling back the two ring fingers and little fingers and stretching the rest of the fingers as if they were pointing at someone.

"No Trinidadian can tell another person who is the head, since it endangers the security of the Trinidadians," reads the first commandment of this gang, which has become one of the main problems for the Police due to its aggressiveness.

Aggressive and decisive, never let the moment of failure pass through your mind”, says epigraph 7 of the Trinitarian Bible.

"The Trinitarians have to be united until death and they have to greet each other saying EY DYPY or love of country, brother," it is indicated in other verses.

He also makes it clear that

once in the group there is no going back.

“After a person swears as a Trinitarian he cannot leave, since he has taken an oath before God and the world.

He will be a Trinitarian until death».

They are the most active and violent group.

necklaces with the white, blue and red colors of the Dominican flag.

Its creation in Spain dates back to 2004 and is fed by Dominicans and deserters from the Ñetas and the Latin.

Its members are Dominicans, aged between 13 and 20 years.

Most were born in Spain and others already have dual nationality (Dominican and Spanish).

They admit Colombians and, exceptionally, Ecuadorians, since the hatred against them is visceral.

They boast of their belonging to the collective and never act alone, but rather sheltered from the rest of their comrades.

Its own denomination contains the key to success against this group: you don't play with the Dominicans.

They make a gesture with their hands in which they show all fingers up except the middle or middle finger.

Band originally from Puerto Rico and also of Colombian descent.

The color that identifies them is white and the symbol, a Ñ, next to a heart that means Ñeta's love.

Between 2015 and 2018 they were the group that gave the Police the most trouble in the Community of Madrid.

The symbology consists of crossing the middle finger over the index finger, both stretched out, representing the protection of the big one with the little one.

With this gesture they place their hand on their heart and accompany it with the phrase: "Ñe De Cora".

Symbols of the Latin King

Its symbol is a five-pointed crown, which represents the 5 five Caribbean islands (Puerto Rico, Cuba, Dominican Republic, Haiti and Jamaica) and which the Kings represent by raising and approaching the little finger, index finger and thumb, leaving the fingers folded. 2 fingers left over.

Members identify themselves with the color gold (or yellow) and black and the initials ALKQN (Almighty Latin King and Queen Nation, «The almighty nation of Latin kings and queens», in English).

Some have crowns tattooed on their body.

The Latin Kings were the first Latin gang in Spain and the most established in the 2000s. In 2007 the Provincial Court of Madrid

in the Community of Madrid and

In March 2010, the National Police arrested the leaders of the Kingdom of the Latin Kings in Madrid, from five chapters in the capital and from the Leganés chapter. Despite these police coups, their ramifications are still latent, although they are not the largest group.

Symbology of the DDPs

The color that identifies them is red.

With the fingers they make a symbol forming the word

They are divided into blocks and are related to common crime, carrying out robberies with violence and serious assaults.

A dozen of its members have been arrested in the last three months.

Very rowdy people (Mara), made up mainly of Salvadorans (Salva) and with a reputation for being smart and savvy (Trout).