The Arab Coalition to Support Legitimacy in Yemen announced that it had carried out 21 targeting operations against the terrorist Houthi militia in Hajjah and Marib during the past 24 hours, which led to the destruction of 15 military vehicles, and casualties among the militias. a 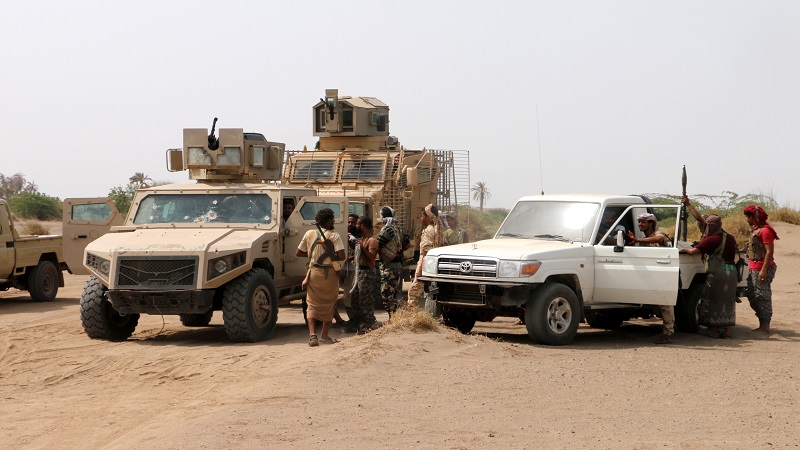 Elements of the Yemeni forces on one of the battlefronts against the Houthi militia.

The Arab Coalition to Support Legitimacy in Yemen announced that it had carried out 21 targeting operations against the terrorist Houthi militia in Hajjah and Marib during the past 24 hours, which led to the destruction of 15 military vehicles, and casualties among the militias.

And field sources in Taiz confirmed that 8 Houthi militants, including a field leader, were killed in renewed confrontations with the Yemeni army and the resistance in the Al-Arbaeen front, north of the city.

The coalition fighters launched a raid on a militia site in the "Ghorab" area in the Al-Dhabab front, west of Taiz, which led to the destruction of a weapons store at the site.

The Human Rights Information and Rehabilitation Center documented 83 violations by the Houthi militia against civilians in Taiz last January.

In Hodeidah on the western coast, the joint forces were able to thwart an attempt to create Houthi sites in the Al-Jarrahi district, south of the governorate, by targeting Houthi weapons and artillery positions in the district. Field sources confirmed the killing of 25 Houthis, burning mechanisms and destroying weapons in the process. Militia elements.

In Marib, the fronts of the Ramli axis in the south of the province witnessed violent confrontations between the legitimate forces and tribes on the one hand, and the terrorist Houthi militia on the other hand, during which Houthi attempts to infiltrate the army’s positions on the “La’iref” and “Faliha” fronts, south of the eastern Balqa, were thwarted.

Field sources stated that the army and tribes, backed by coalition fighters, launched a counterattack on the militia positions in the Ramli axis, which incurred heavy losses in lives and equipment.

In Saada, the artillery of the Yemeni army bombed the "Al-Raqqo" site of the Houthis in the Munabbih district, which led to the death of one member and the injury of two other militia members.

The coalition fighters targeted Houthi militia reinforcements in an area between the districts of Haidan and Al Dhaher, west of Saada, in the vicinity of the Hayran district, north of Hajjah, and another in the border district of Haradh.