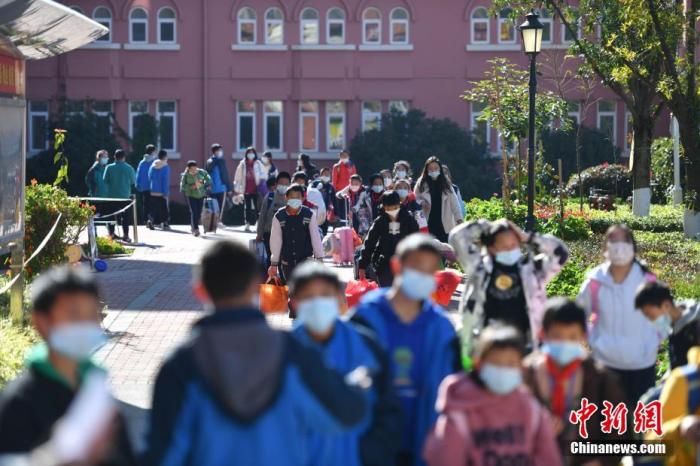 Some people support this, while others think that kindergarten children are too young to emphasize "sex education".

Sex education, only needed in adolescence?

How many misconceptions do we have about sex education?

The picture shows a school, the child is ready to go home.

Sex education, only in adolescence?

"Kindergarten teaches sex, isn't it funny?" said a father of a 4-year-old child in Guangdong; a married woman in Sichuan also believed that "kindergarten is too early to learn about sex, it is unnecessary, and junior high school is about the same."

In the comment area, many netizens also believe that children in kindergartens are too young to carry out sex education.

Others mentioned that "sex education" should not be emphasized, but "safety education".

"The term sex education has entered the public topic for a relatively short time. In Chinese culture, 'sex' does make people think of sexual behavior, reproductive organs, etc. In fact, the current sex education is advocated by the United Nations." Comprehensive sex education', sexual safety is only part of it." Liu Wenli, a professor at Beijing Normal University and an expert on children's sex education, said in an interview with Chinanews.com.

Liu Wenli introduced that this suggestion was made by Chen Wei and his joint research. In addition to understanding the body and the birth of new life, sex education in kindergartens also includes understanding the perception of the body, understanding emotions, learning positive emotional processing strategies, and understanding gender equality. Respect children's rights, prevent child sexual abuse, learn to protect themselves, and abide by social norms.

She pointed out that compared with the traditional sex education that is limited to the physical level, comprehensive sex education has a very core concept - interpersonal relationships.

"When we're talking about 'sex', it's impossible to put aside relationships. Even just having sex involves a complex set of factors, such as communicating with people first, and having to respect other people's wishes. In terms of social norms, it's also important to let Children have a sense of gender equality, and tell them the difference between public places and private places, such as not being allowed to touch genitals in public places.”

Experts said that from the perspective of the individual development of a child, sexual development begins from birth, and children of different ages have different needs for sex education. As a parent, you should understand the scientific knowledge of child development, rather than making arbitrary judgments based on personal values.

How urgent is sex education?

This is not the first time that sex education has entered the public eye.

In 2019, Yu Xinwei, a member of the National Committee of the Chinese People's Political Consultative Conference, proposed "Proposal on Incorporating Child Sexual Assault Education into the Compulsory Education Curriculum System".

In 2021, Ma Xiuzhen, a member of the National Committee of the Chinese People's Political Consultative Conference, suggested that sexual health education be included in the education curriculum system for middle school students, and pointed out that the average age of puberty development for girls in my country is 9.2 years old, 3.3 years earlier than 30 years ago.

During the two sessions this year, Liu Li, a representative of the National People's Congress, suggested that sexual assault prevention courses be included in nine-year compulsory education.

"When children are sexually assaulted in the process of growing up, it will not only bring physical harm, but also serious psychological and spiritual harm. I hope that children can learn the knowledge of sexual assault prevention in advance to protect themselves."

Liu Li pointed out that the "Girls Protection" 2021 Statistical Report on Child Sexual Abuse Cases and Child Sexual Assault Education Survey Report shows that over 90% of the respondents believe that it is necessary to conduct sex education and sexual assault prevention education for underage children.

At present, sexual assault prevention education for minors in the compulsory education stage in my country still lacks national and institutional arrangements, and it is difficult to popularize it.

Gao Xiaodi, a member of the National Committee of the Chinese People's Political Consultative Conference, also said that although sex education has been brought to the level of laws and regulations, there are many obstacles to its implementation, including misunderstandings about sex and sex education, thinking that "sex = sexual behavior" and "sex education = sexual instigation" Wait.

She suggested implementing sex education into the classroom at all levels and types of schools.

Organize experts to issue the "China Sex Education Technical Guidance Outline" as soon as possible, so that sex education can be followed in the classroom.

In Harbin, students keep their distance in front of the school gate and wait in line to enter the school.

Expert: Sex education is not just for schools and parents

"Our long-term practice of sex education in kindergartens shows that children have great demand for sex education. Children can also learn and understand the knowledge taught, which can affect their knowledge, attitude and behavior." Liu Wenli said.

She said when parents really understood what sex education was about and what it was about, they were "very supportive".

In fact, sex education has also been regulated at the national level.

On June 1 last year, the revised Minor Protection Law came into effect, which clearly states that schools and kindergartens should provide age-appropriate sex education for minors.

The Regulations on the Protection of Schools for Minors, which came into effect on September 1 last year, also pointed out that adolescence education and sex education should be carried out in a targeted manner, so that students can understand physical health knowledge, and improve their self-protection awareness and ability to prevent sexual assault and harassment.

"The problem is that there is a lack of professionals to do it, and sex education has not been incorporated into the construction of the kindergarten curriculum system." Liu Wenli pointed out that the Ministry of Education's "Guidelines for the Learning and Development of Children Aged 3 to 6" pointed out five areas: health, language, Society, Science, Art.

There are close links between sex education and health, but the guide only mentions sexual assault prevention, without specifying how to carry it out.

Overall, the challenges of sex education in kindergartens are "very big".

She said that at present, clearer guidelines, professional teachers, and corresponding teaching materials all need to be solved urgently.

In addition, families, schools, communities and society should also establish a friendly attitude, pay attention to and support kindergartens to carry out sex education.

"Don't let the misunderstandings, myths and even prejudice of adults become obstacles to the development of sex education. Otherwise, who will ensure the health and safety of children?" Liu Wenli said.