C3: Lyon wins in Porto (1-0) and takes an option on the quarters

Olympique Lyonnais beat FC Porto 1-0 on Wednesday at the Dragon stadium in the 8th first leg of the Europa League, a victory that puts them in a good position for qualification in the quarter-finals. 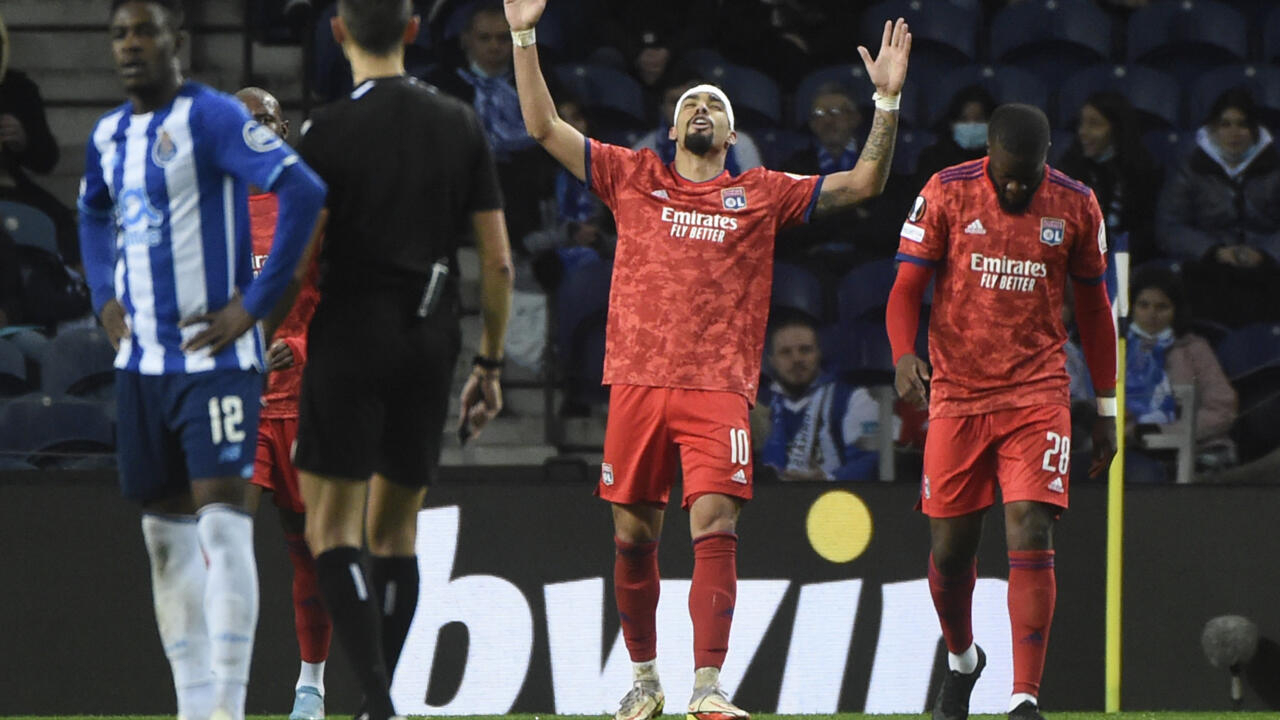 The Lyonnais prevailed with a goal from Brazilian international Lucas Paqueta (60th, 1-0) after missing a large number of chances.

OL got into the game well, putting on a lot of intensity and establishing themselves in the opposing camp, thanks in particular to the technical mastery of their midfielders.

But throughout the first period, he failed to capitalize on his chances.

A cross shot from Dubois was repelled by the goalkeeper of Porto Diogo Costa (8th) then a fine header from Dembélé on a free kick was also cleared by the Dragons goalkeeper (11th).

Toko-Ekambi completely missed his recovery while Paqueta had been well launched in full surface (22nd).

The top scorer of the group stage (6 goals) then hampered Dembélé, the two players were however in excellent conditions to score (38th).

Cameroonian striker from Lyon Karl Toko Ekambi stumbles against Porto goalkeeper Diogo Costa, during the round of 16 first leg of the Europa League, on March 9, 2022 at the Dragon Stadium MIGUEL RIOPA AFP

In the meantime, OL goalkeeper Anthony Lopes had to be vigilant twice.

First by releasing a lob attempt from Vitinha (12th) then by boxing a placed shot from Pepê (32nd).

The Portuguese goalkeeper of Lyon, Anthony Lopes diverts the ball, during the round of 16 first leg of the Europa League against Porto, on March 9, 2022 at the Stade du Dragon MIGUEL RIOPA AFP

Upon returning from the locker room, Lyon initially continued to waste despite their domination.

Perfectly served back after a good overflow from Faivre, Dembélé missed the target (50th).

The Frenchman shot wide again after a recovery from Lyon (53rd).

We had to wait for Toko Ekambi to overflow on the left side before serving Dembélé who himself followed closely for Paqueta so that the Brazilian finally opened the scoring with a flat right foot (1-0, 60th).

A goal first refused for an offside position before being validated with recourse to video arbitration.

A few minutes later, the VAR was once again beneficial to Lyon by canceling a penalty for Porto following a handball from Paqueta in the area after poor control from the playmaker (65th).

Until the end of the match, the Rhône players left the ball to their opponent, contenting themselves with defending.

And if they were able to protect their penalty area, they still shivered when a recovery from Fabio Vieira passed just above the cages of Anthony Lopes (83rd).

Finally, the Rhodaniens shuddered again when Mbemba shook their nets after added time, but the VAR canceled the Congolese international's goal for an offside position (90 + 5).

On the strength of this success, the first against FC Porto in five European confrontations, Peter Bosz's men will be able to approach the return match, on March 17, with an advantage which could prove to be invaluable.