What did the representative of the Hubei delegation say, the general secretary was "very moved"

The annual national event comes with spring.   Special time and space nodes, memories warm people's hearts and inspiring people to forge ahead. On May 24, 2020, Xi Jinping, General Secretary of the CPC Central Committee, State President, and Chairman of the Central Military Commission, participated in the deliberation of the Hubei delegation of the Third Session of the 13th National People's C 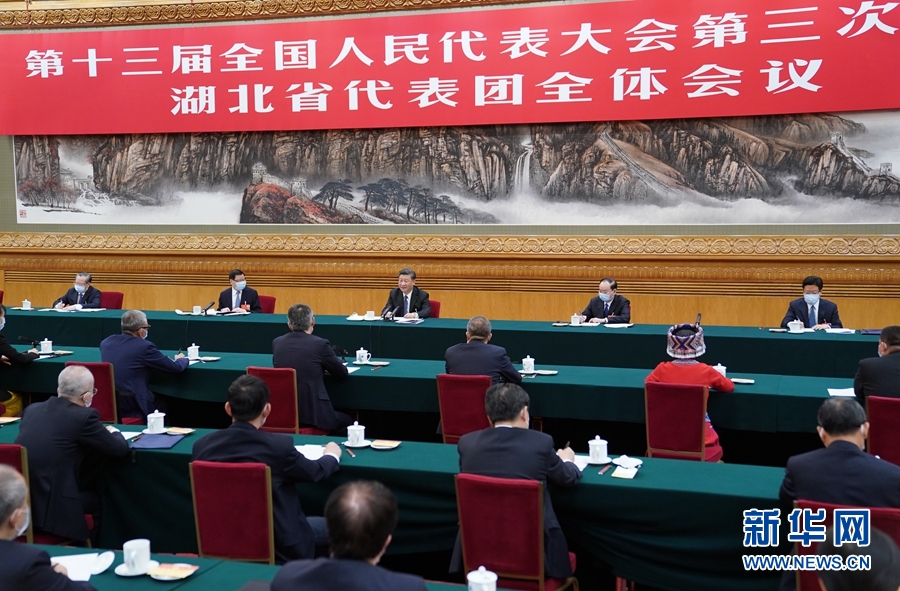 On May 24, 2020, Xi Jinping, General Secretary of the CPC Central Committee, State President, and Chairman of the Central Military Commission, participated in the deliberation of the Hubei delegation of the Third Session of the 13th National People's Congress.

Two years ago, on the afternoon of May 24, with warm applause, General Secretary Xi Jinping walked into the venue of the Hubei delegation of the third session of the 13th National People's Congress.

It was a scene that the representatives of Hubei will never forget.

"I propose that the Hubei delegation must come. You are the representatives of more than 60 million people in Hubei, and I want to visit everyone." The general secretary said affectionately.

On May 24, 2020, Xi Jinping, General Secretary of the CPC Central Committee, State President, and Chairman of the Central Military Commission, participated in the deliberation of the Hubei delegation of the Third Session of the 13th National People's Congress.

Two years later, and recalling the warm moments of deliberation with the general secretary, the representatives of Hubei are still in high spirits.

"Face to face with the general secretary, the intimacy is overwhelming, like a knee-to-heart talk."

"The general secretary cares about the meticulousness of inquiries, and his strong feelings for the people warm people's hearts."

"The general secretary's 'three have not changed' affectionate message stirs up the passion for struggle."

Revisiting the happy memories of that scene, the Hubei delegates felt more and more of the general secretary's deep affection for Jing Chu.

"Every time I receive treatment, I remember what the general secretary said 'life comes first'." Representative Roger, Secretary of the Party Committee and President of Shiyan Taihe Hospital, felt the deepest feeling.

He was the first to speak at the deliberation site that day.

"I saw you on TV." As soon as Roger spoke, General Secretary Xi Jinping recognized him.

"You were interviewed on the representative channel and said that you organized more than 10 people to set up a special medical team and successfully treated an 87-year-old man. I mentioned you to the Inner Mongolia delegation and said that this incident impressed me deeply. This sentence The words are also in the newspaper." The general secretary said with a smile.

During the reporting process, the general secretary asked Roger about relevant details twice.

That day, Roger wrote down two pages of notes.

He also wrote such a paragraph: The general secretary puts the life and health of the people in the highest position.

Our grassroots medical workers must implement "life first" into every life-saving process.

"To implement the important instructions of the general secretary, we are to put the people first and life first as the most important insistence." Roger said.

In the past two years, Hubei has made every effort to weave a dense public health protection net and create a high-quality "Hubei model".

A combined peace and war hospital was built, a grass-roots mobile medical and health service vehicle entered the village, a university student village doctor from a village came, and a top-three hospital in front of the house was built...

What warmed Yan Zhi's heart was that after hearing the difficulties and suggestions he had reported, the general secretary made on-site arrangements for the package of policies just released by the central government to support Hubei's economic development.

"The general secretary's entrustment is the biggest driving force to lead the enterprise forward."

With the support of the central government's package of policies, Zall, like many enterprises in the province, has taken the initiative and forged ahead.

In 2021, Hubei's total economic volume will reach the level of 5 trillion yuan, returning to the seventh place in the country.

The new leap has fully confirmed the major judgment of the General Secretary that "the three have not changed", and has effectively answered the ardent expectation of "the three must be able".

"Two years ago, I promised the general secretary that I would do a good job in rural revitalization after returning to the village." Representative Zhang Wenxi, secretary of the party branch of Chenyu Village, Xinzhou District, Wuhan City, said, bearing in mind the general secretary's entrustment, he and his fellow villagers expressed their hearts and minds. Thinking in one place, working hard in one place.

Today, the village has a bumper harvest of 1,000 mu of early-ripening peaches. In addition, the wheat base and rapeseed base have a good harvest. The people's pockets are even bigger, the collective economy has grown, and the rural industry has become more prosperous.

"The general secretary said that we hope that Enshi can transform selenium-rich resources into selenium-rich industries, and turn characteristic resources into development advantages." Song Qingli, a representative of Tujia farmers from Hefeng County, Enshi Tujia and Miao Autonomous Prefecture, told the general secretary one by one A number of gratifying changes in my hometown.

What are sage leaves?

What is the per capita income?

Is there an epidemic in the county?

The inquiries of concern are full of the general secretary's concern for the Wuling Mountains.

Song Qingli answered one by one, and told the general secretary that he would definitely lead the villagers to work hard to "upgrade" Hefeng's characteristic agricultural products, and make the days more prosperous.

In the past year, he has promoted and promoted Hefeng's characteristic agricultural products everywhere.

Under his "screaming", more and more Hefeng premium products came out of the mountains, such as potatoes, bacon, honey, etc.

"After nearly two years, the general secretary's entrustment is still haunting me. I always keep in mind that in the classroom and in life, I must teach the 'ideological and political course' well." Yu Yu, a teacher at the School of Mechanical and Electrical Engineering, Wuhan City Vocational College Cheng said.

I still remember that when she communicated with the general secretary, she choked up several times.

She told the general secretary the story of sinking into the community as a volunteer. She said: "We have not only sent a fish and a basket of eggs to the community, but also the care of the Party Central Committee and the people of the whole country." , she stood up and bowed her thanks, "Before you come, everyone entrusts me to say 'thank you'!"

Wuhan, which has been most affected by the epidemic, is where the general secretary's deepest concern lies.

"I was also very moved after listening to the speeches of several representatives just now." General Secretary Xi Jinping said emotionally: "Wuhan is worthy of being a heroic city, and the people of Hubei and Wuhan are worthy of being a heroic people. The cadres and the masses of the ethnic group extend their sincere greetings and heartfelt thanks.”

Two years later, 1.04 million party members and cadres in Hubei have reported to the communities where they live, building a red line of defense.

Unforgettable memories have turned into inexhaustible power, and they are still strong after wind and rain.

In the land of Jingchu, the deep concern has been turned into a powerful driving force, and Hubei has set sail to speed up "building a fulcrum, walking in the forefront, and writing a new chapter".