Video.. The occupation arrests Palestinians in Jerusalem and demolishes the homes of two prisoners in Jenin

The Israeli occupation forces arrested a number of Palestinians on Monday evening and early Tuesday morning in the Old City of occupied Jerusalem, and demolished the homes of the two prisoners, Ghaith and Omar Jaradat, in the village of Al-Silah Al-Harithiya near the city of Jenin. 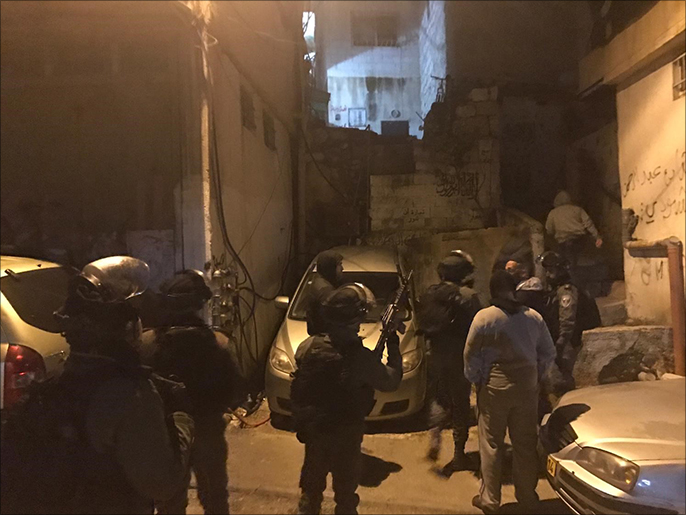 Yesterday evening, Monday, and early Tuesday morning, the Israeli occupation forces arrested a number of Palestinian youths in the Old City of occupied Jerusalem, and demolished the homes of the two prisoners, Ghaith and Omar Jaradat, in the village of Al-Saila Al-Harithiya, near the city of Jenin.

The occupation forces escalated their attacks on Palestinians in Jerusalem after the stabbing carried out by a Palestinian youth at Bab Al-Qattanin - one of the gates of Al-Aqsa Mosque - and resulted in the injury of two Israeli policemen and the death of the perpetrator, Abdel-Rahman Jamal Qassem (22 years).

A state of alert prevailed among the ranks of the occupation forces after the stabbing attack, which is the second in about 35 hours, as the first took place at dawn on Monday at Bab Hatta.

Dozens of occupation soldiers deployed at the gates of the Old City, prevented residents from entering it, and attacked Palestinians by pushing and beating them using batons.

The occupation police arrested the young men at the Al-Amoud Gate, subjected them to body searches in provocative ways, and abused the young man, Iyad Owaida, from Al-Saadiya neighborhood, at the moment of his arrest.

Settlers also provoked young men in the Qattanin market in the Old City of Jerusalem after the stabbing incident.

Video clips broadcast by activists on social media showed the occupation forces' attacks on families and journalists, preventing them from crossing and media coverage, in addition to the arrest of a number of young men.

Press coverage: "The occupation forces assault the Palestinians and arrest a young man near Bab Al-Sahira in Jerusalem."# Palestine pic.twitter.com/2tDkhFv4wz

The official "Kan" channel said that the Israeli police chief, Yaakov Shabtai, conducted an assessment of the situation after the stabbing operation, with the participation of leaders in the police force.

The Hebrew channel added that the occupation police decided to reinforce the Old City with dozens of fighters and police officers in the near future, in anticipation of the explosion of the security situation in the city with the advent of the month of Ramadan.

In Jenin, in the north of the occupied West Bank, clashes erupted between the occupation forces and the people of Al-Sila Al-Harithiya village, during the demolition of the homes of the two prisoners, Ghaith and Omar Jaradat, whom they accused of participating in the killing of a settler last December.

Scenes from the storming of the occupation forces to the town of Silat Al-Harithiya, west of Jenin.

Violent clashes took place between the occupation army and Palestinian resistance fighters, including shooting and the throwing of homemade explosive devices towards the occupation soldiers.

A number of civilians were wounded during the confrontations, while eyewitnesses confirmed that there were injuries among the occupation soldiers.

The occupation forces demolished one of the houses manually, and the other by detonating it with explosive materials.

Two Israeli policemen were also slightly injured after a car driven by a Palestinian collided with their vehicle in the village of Silat Al Harthiya.

The Israeli police said that a Palestinian vehicle collided with an armored vehicle belonging to the Israeli army while it was carrying out an operation in the village of Al-Silah Al-Harithiya, confirming that it arrested the suspect and took him for investigation.

Eyewitnesses: "A Palestinian vehicle ran over a number of occupation soldiers inside the town of Silat Al-Harithiya, west of Jenin."

And in the middle of last February, the Israeli army demolished the house of the prisoner Mahmoud Jaradat, accused of carrying out the shooting that killed a settler.

On December 20, Israel notified 4 Palestinian families in the village to demolish their homes, claiming that 5 of their members were involved in the killing of an Israeli settler.

The demolition notices included the homes of the detained brothers Omar and Ghaith Ahmed Jaradat, Muhammad Youssef Jaradat, and Ibrahim Tahaineh, in addition to the house of Mahmoud Jaradat, which was demolished.

Israel says that the five carried out a shooting attack on settlers near the evacuated settlement of Homesh, northwest of Nablus (north) on December 16, killing a settler and wounding two.

The Israeli authorities evacuated the "Homish" settlement, which was built on the lands of the towns of "Burqa" and "Silat al-Dhahr" in 2005, but settlers still visit it from time to time.

Israel usually demolishes the homes of Palestinians who carry out attacks that lead to the death of Israelis, which human rights organizations criticize, as they consider this a "collective punishment."