The government work report emphasizes "patriots ruling Hong Kong", how can it be better implemented? 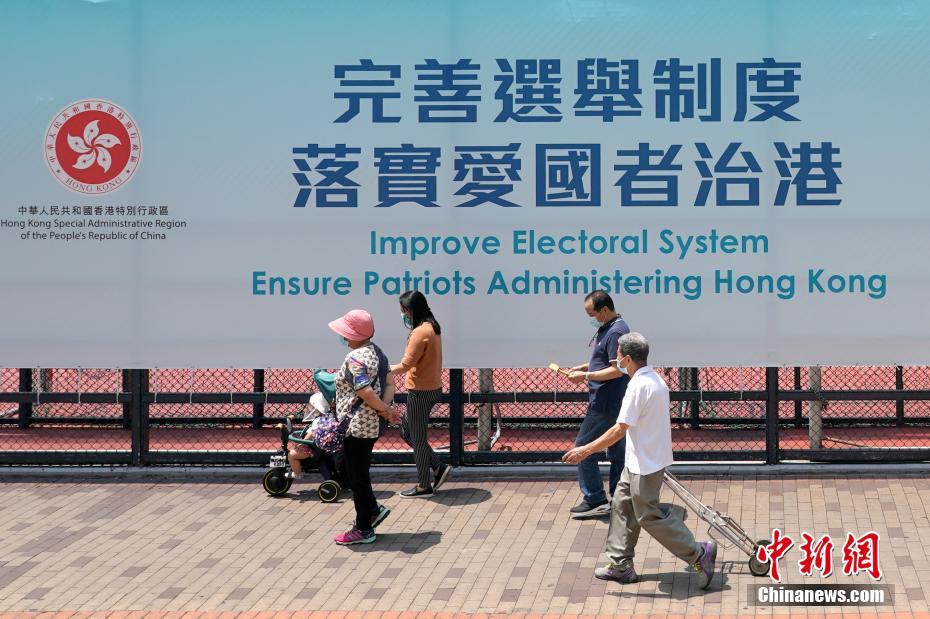 (Observation of the Two Sessions) The government work report emphasizes "patriots ruling Hong Kong", how can it be better implemented?

Hong Kong, which has experienced the impact of the "turbulence of amendments" and the challenges of the new crown epidemic, how to better implement the principle of "patriots governing Hong Kong" has received extensive attention from the representatives of the Hong Kong National People's Congress.

The picture shows the advertisements "Improve the electoral system and implement the patriots to rule Hong Kong" can be seen everywhere on the streets of Hong Kong.

Yao Zuhui, deputy to the National People's Congress of Hong Kong and chairman of Shanghai-Hong Kong Joint Holdings Co., Ltd., said that to implement "patriots governing Hong Kong", we must do a good job in education, especially national history education.

Growing up in Hong Kong, Yao Zuhui's primary and secondary schools did not have modern Chinese history and Chinese geography courses.

In an interview with a reporter from China News Agency, he said that in addition to colleges and universities, primary and secondary schools should also have Chinese history classes, and they should cultivate students' national awareness from an early age.

Huang Junyu, president of the Hong Kong Federation of Educators, pointed out that the key to cultivating patriots in schools lies in teachers.

If teachers cannot be patriotic, it will be difficult to cultivate the next generation of patriots.

A teacher's patriotism can drive more people, especially the younger generation, to return to their hearts.

Huang Junyu said that Hong Kong has long been influenced by Western public opinion and liberal ideology. Some young people put personal rights and freedoms in a very high position, and put national interests and social interests in a relatively secondary position. As a result, some problems have arisen, such as in 2019. "Black Storm" incident.

"For a long time, the education sector in Hong Kong did not dare to mention patriotic education, which is very strange. Love is a positive thing, but patriotism was once regarded as a negative one." Huang Junyu said that since the implementation of the Hong Kong National Security Law, Coupled with the improvement of Hong Kong's electoral system, after the discussion on the principle of "patriots ruling Hong Kong" has been publicized, patriotic education has finally become a matter of course and reasonable in Hong Kong.

He pointed out that schools are crucial to developing patriots.

Cai Yi, deputy to the Hong Kong National People's Congress and president of the Hong Kong Island Federation of All Walks of Life, said that since the Hong Kong election system was improved, the SAR government has successively held ceremonies for relevant public officials to swear allegiance to the country and the SAR government, which is conducive to the implementation of "patriots ruling Hong Kong". "in principle.

He believes that in the future, the oath-taking system can be continuously improved to ensure that public officials of the SAR government love the country and Hong Kong.

Cai Yi also pointed out that "patriots ruling Hong Kong" requires long-term arrangements, and it is necessary to strengthen the training of civil servants of the SAR government, especially the study of laws such as the Constitution, the Basic Law and the Hong Kong National Security Law.

He suggested that more Hong Kong civil servants should be organized to study and study in the Mainland, so as to have a deep understanding of the national conditions and national policies.

If a public official commits an act endangering national security after taking an oath, he will be punished according to law to ensure that the ruler can always serve Hong Kong and safeguard national security.

Improve the ability of governance to solve deep-seated problems

Yao Zuhui said that "patriots governing Hong Kong" not only require those who govern Hong Kong to understand, love and support the country, but also have the ability to help Hong Kong develop its economy and improve people's livelihood.

Those who govern Hong Kong should promote Hong Kong's in-depth participation in the construction of the Guangdong-Hong Kong-Macao Greater Bay Area, so as to catch the express train of national development.

In recent years, the new crown epidemic has hit the world, testing the governance capabilities of the rulers of various countries and regions.

Chen Yong said that the governors also need to continuously improve the level of governance, so that the general public can have a sense of achievement and happiness.

Chen Yong pointed out that Hong Kong is currently facing the challenge of the epidemic. With the support of the central government, all sectors of Hong Kong should work together to fight the epidemic and protect the health of the general public.

After the epidemic, the SAR is facing economic revival. It is necessary to further promote the integration of Hong Kong into the overall development of the country, and focus on solving deep-seated problems such as housing difficulties.