"Emirati faces from my country" light up "Expo Dubai" .. with 30 inspiring photos

On the occasion of International Women’s Day, which falls on the eighth of March, the area of ​​the UAE pavilion at “Expo 2020 Dubai” is decorated over a period of two weeks with 30 unique images, at the heart of which is a rare image of the wife of His Highness Sheikh Mohammed bin Rashid Al Maktoum, Vice President and Prime Minister of the UAE and Ruler Dubai, cm 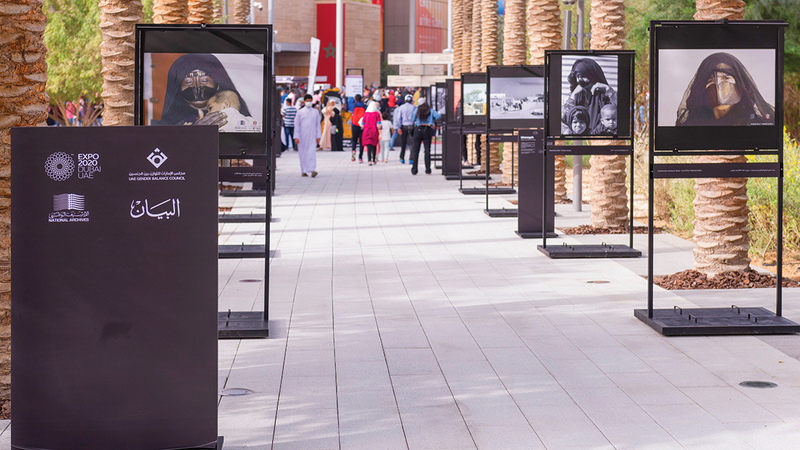 "Emirati faces from my country" light up "Expo Dubai" .. with 30 inspiring photos

On the occasion of International Women’s Day, which falls on the eighth of March, the area of ​​the UAE pavilion at “Expo 2020 Dubai” is decorated over a period of two weeks with 30 unique images, at the heart of which is a rare image of the wife of His Highness Sheikh Mohammed bin Rashid Al Maktoum, Vice President and Prime Minister of the UAE and Ruler Dubai, Her Highness Sheikha Hind bint Maktoum bin Juma Al Maktoum, as part of the "Emirati Faces from My Country" exhibition, organized by the Emirates Council for Gender Balance, in cooperation with the Expo 2020 Dubai office.

The exhibition was inaugurated in the presence of the Vice-President of the Emirates Council for Gender Balance, Director-General of the Media Office of the Government of Dubai, Mona Al-Marri, and Secretary-General of the Council Shamsa Saleh. Inspiring in various aspects of life at the time as a wife and housewife supporting her husband and her family, a student, a teacher, a farmer, a craftswoman and an advanced in the first classes in the police corps and other fields, and also reflects the great support provided to her by the late father Sheikh Zayed bin Sultan Al Nahyan, may God rest his soul, and his educational care for her And professionally and put her on the path of partnership, development and construction alike with her brother, the man.

The wife of His Highness Sheikh Mansour bin Zayed Al Nahyan, Deputy Prime Minister and Minister of Presidential Affairs, Her Highness Sheikha Manal bint Mohammed bin Rashid Al Maktoum, President of the Emirates Council for Gender Balance and President of the Dubai Women's Foundation, said: "These rare and inspiring images in giving, belonging and perseverance. Which dates back to the time period from the fifties to the eighties of the last century, which was provided to us by the National Archives and Al-Bayan newspaper for display during the period from the sixth to the 20th of March.”

She added, "Given the diverse and important roles of women in achieving family stability, raising children, standing by her husband, and her efforts to build and develop her country through her work in various fields, in addition to the originality that was characterized by her in her various stages of life, the pictures were classified into four groups, each of them It bears an Emirati word that is commonly used in the local dialect, which is (Al-Sas, Sind, Hashim and Umayah), pointing out that the current development of the UAE and the advanced position of women in various fields did not come out of nowhere, but rather based on a long-standing heritage and authentic values ​​that distinguished the Emirati society as men. And women throughout history, and showed the metal of women with the establishment of the Union and its need for solidarity, effort and giving in order to turn into a state that successfully finds its way among the advanced nations at all levels.

Her Highness Sheikha Manal bint Mohammed bin Rashid Al Maktoum indicated that Her Highness Sheikha Fatima bint Mubarak, Chairwoman of the General Women's Union, President of the Supreme Council for Motherhood and Childhood, and Supreme Chairwoman of the Family Development Foundation (Mother of the Emirates), represents a pioneering model in giving to her country, and she was the support of the founder of the Union The late Sheikh Zayed bin Sultan Al Nahyan, may his soul rest in peace, also provided all forms of support to her countrymen during the blessed march of the state.

Her Highness praised the great role played by Her Highness Sheikha Hind bint Maktoum bin Juma Al Maktoum, as a support and supporter for His Highness Sheikh Mohammed bin Rashid Al Maktoum, Vice President and Prime Minister of the UAE and Ruler of Dubai, in his life and practical career, in addition to her white hands that extended to all All over the world, there are humanitarian and charitable works, and the exhibition represents an opportunity to celebrate her Highness in appreciation of this extended giving.

Her Highness Sheikha Manal bint Mohammed bin Rashid Al Maktoum continued, "The exhibition, with its various images, enriches the cultural and artistic harmony of (Expo 2020 Dubai), and strengthens bridges of civilizational communication between the Emirates and the world, as it provides visitors with the opportunity to discover bright aspects of the details of Emirati life with At the beginning of the establishment of the Union, women were and still are the shining essence of their giving, perseverance and hopes for a safe society and a prosperous country, and the camera has documented these bright contributions.”

Giving and Perseverance Mona Al Marri said, "(Expo 2020 Dubai) represents an ideal platform to present these images that reflect the role of women in the societal balance, and their contribution to construction and development efforts alongside men since the years before the union until the UAE reached its current state of development and prosperity. And an advanced global position in various fields,” explaining that the exhibition focuses on the face of each woman separately, exploring the stories behind it that take us to the fragrant past with its details and the simplicity of its tools, and as a guide that documents through the image her role through different time periods.

She added that the "Emirati Faces" exhibition contributes to educating the new generations and introducing them to the important role that women played in this timeless period of the union's life, and assures the world that she was and still is a major and indispensable partner in building her country and the renaissance of her society, and she also played her role as a housewife and support for the family. The husband is well, and she was honored and cared for by her community and leadership throughout the blessed march of the union, based on the teachings of the true Islamic religion, which enjoins good on women.

For her part, director of the "Emirati Faces" project, Mahra Abdullah, said, "The exhibition is divided into four sections, and all the images focus on the face because it is the most influential in others, and an expression of the person and his feelings. The Emirati woman and her crossing from yesterday, which was full of giving, hope and perseverance, to this brighter and more distinguished day, thanks to the support provided to her by the late Sheikh Zayed, where he was the basis for the renaissance, education and excellence of women by encouraging her in education and work. On various occasions for women, including pictures in schools, the UAE University, the Women’s Renaissance Association, and with women in the field of work.

As for the group of photos, “The Bond” expresses the importance of the woman and what she has done and is doing as a bond for her husband, her children, and her community, and it highlights her strength, perseverance, love and devotion to her family. The back of the house” and “Umm al-Ayal” farm, grind, bake and take care of children.. In short, it is a bond for the family and the country.

She added that the "Hasheem" ​​photo collection expresses the dignity and modesty that characterizes the clothes that women wear as a lifestyle in all their age stages since childhood and on various occasions, including their attendance at weddings, thus reflecting the authentic Emirati customs and traditions.

Finally, the "Umayah" group of pictures translates the loftiest feelings of motherhood that are not hidden by the face covering or the "burqa" as an authentic Emirati tradition, as it shows love, patience, tenderness, strength and hope.

• The 20th of this month concludes the exhibition that was launched at the «Expo Dubai».

• «The exhibition, with its various images, enriches the cultural and artistic harmony of (Expo Dubai), and strengthens bridges of civilizational communication between the UAE and the world».

• "(Expo Dubai) represents an ideal platform to display these images that reflect the role of women in the societal balance, and their contribution to construction and development efforts."

Part of giving back

Mahra Abdullah, director of the "Emirati Faces" project, expressed her happiness at organizing the exhibition at Expo 2020 Dubai, as it represents an opportunity to introduce the history of Emirati women in giving to their country, society and family in different eras, and played the role of a bond for her husband and family, and contributed to the development of her country from sites She noted that organizing this exhibition is part of giving back to mothers and appreciating their efforts and giving for a long time, and we expect it to resonate well among visitors to Expo 2020 Dubai, especially from the new Emirati generations.