Frederick II.. the German emperor who loved Arabic and spoke it in Sicily before he occupied Jerusalem

The unique story of Emperor Frederick II (1194-1250) who was a king of the Hohenstaufen dynasty of German kings, and was fond of the Arab world. 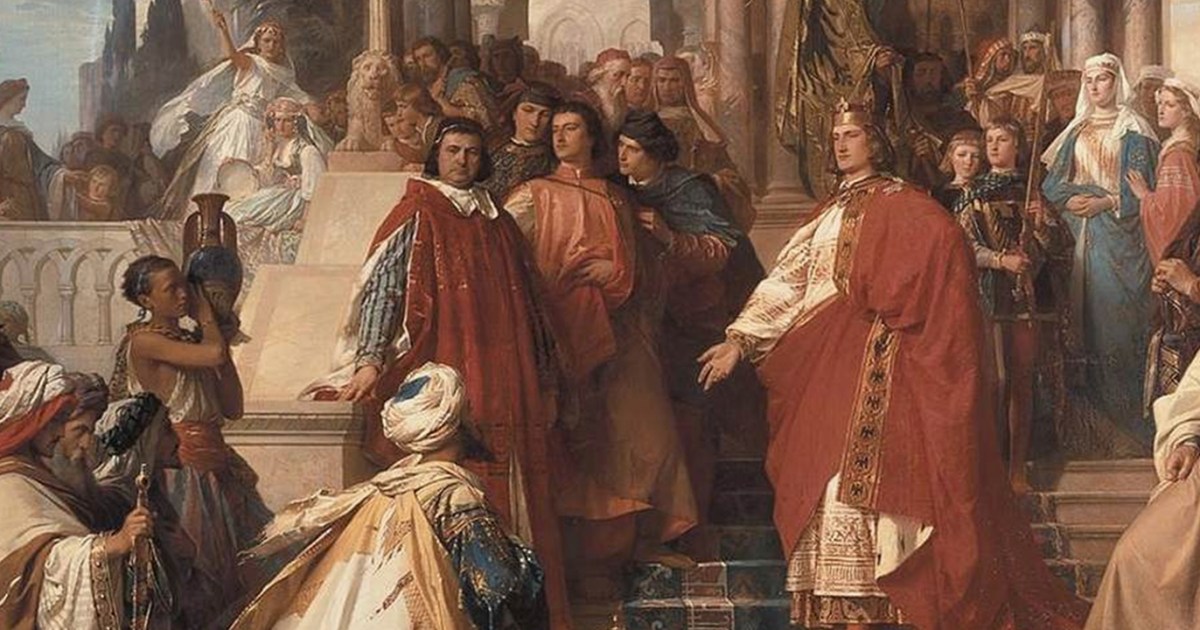 Sicily - the largest island in the Mediterranean - was known as a center for the exchange of cultures between the European and Arab shores on the Mediterranean, and was also the incubator of a thriving Arab culture that did not disappear with the demise of Arab rule and the Romans' control over it in 1072.

The entry of the Arabs into Sicily not only provided the Islamic religion to the island, but also carried Arabic with it as the language of culture and the prestigious elite, and even after the fall of Arab rule, the cultural interaction between the Arabs of North Africa and the inhabitants of southern Europe continued through the Sicilian corridor, and besides Andalusia, Sicily’s multilingual environment provided a means of transportation A number of Arabic vocabulary into various modern European languages.

The decline of the Arab political star from Sicily did not lead to the absence of Arab culture from the Mediterranean island. Rather, the Arab presence remained strong in it, and the court of the Norman kings throughout the 12th century was replete with many Arab poets, scholars and craftsmen, who also held high administrative positions.

The peak of that era of coexistence between cultures was during the reign of King Roger II, who succeeded his father, Roger I in 110 AD. His court was teeming with Arab intellectuals, and the Sicilian king refused to participate in the Crusades despite the Pope's insistence, and the use of the Arabic language became widespread in his financial management, lavish celebrations and in councils. Literary and poetic and even in the palace inscriptions.

In his book "The Civilization of the Arabs" by Gustave Le Bon, the French orientalist said that Roger's successors followed his method in bringing Arab writers closer to their court, including King Guillaume II, who studied the language of the Arabs, and was referring to Arab advisors in his court. Le Bon saw that "the leadership of Arabs in arts and industries And science explains why the Norman kings protected them, and why the monks admired the sophistication of the Arabs, even if they attributed their discoveries to magic.

In that historical context, the presence of a "German" emperor of Sicilian origin who spoke Arabic was not surprising, but Europe knew in those ancient times an empire called the Holy Roman Empire, already ruled by an emperor named Frederick II, famous for the multiplicity of languages ​​he spoke.

In the report published by the French magazine L'Obs, journalist François Renaert tells in the "Unexpected Stories" podcast the unique story of Emperor Frederick II (1194-1250), who was a king of the Hohenstaufen dynasty of German kings, and was fond of a scientist The Arabs, born in Jesse, near Ancona, Italy, were brought up in Sicily, the fruit of a marriage between a prince of Germany and a Norman princess.

The Normans or Normans are an ethnic group that originated in Normandy, the northern region of France. They spoke the Norman French language and played a role in the establishment of the Kingdom of Sicily under the rule of Roger II, and invaded southern Italy, Malta, England and the Iberian Peninsula, as well as their participation in the establishment of the Crusader Principality of Antioch.

It should be noted first that there was in fact neither an emperor nor a German empire in the true sense of the word at the time. Rather, there was in central Europe in the east of the French Empire a political bloc called the Holy Roman Empire, from the tenth to the nineteenth century, which is attributed to Germany and Charlemagne, the king of the Franks (king of parts of present-day Germany and France and the ruler of their empire between 768 and 800 and the emperor of the Holy Roman Empire of the Germanic nation between 800 and 814, because all its princes are descended from large German aristocratic families, and all their emperors are elected by German princes.

The Pope was conferring a character of holiness on the emperors of this political bloc, and that is why they saw themselves above the rest of the Christian kings, and the countries they ruled far exceeded the borders of the German world. And present-day Austria, Belgium, the eastern regions of France and Switzerland, and more than half of Italy.

At that time, Sicily and its capital, Palermo, like the Iberian Peninsula, was under the control of the Arabs. It had become an Islamic emirate since the late ninth century, before the Normans occupied it on their pilgrimage to Jerusalem, and established a Norman kingdom recognized by the Pope.

And because this kingdom was prosperous and rich, this aroused the appetite of a German prince seeking to expand his kingdom, so Henry de Hohenstaven, King of Germany, married the daughter of the Norman king of Sicily, and he was accompanied by a number of German princes and dignitaries who sought to take over many matters there.

A child was born to the new family in 1194, named Frederick, who, on his father's side, enjoys the right to one day become king of Germany (the Holy Roman Empire), and indeed he was crowned emperor in 1215 in the name of Frederick II, and he is one of the most famous emperors of that era, and also on his mother's side is considered a prince Sicily of Normandy, but he did not know either of his parents, who died when he was still a child.

This child remained in southern Italy before he grew up in the city of Palermo, which was at that time multi-ethnic and multicultural, influenced by the Greek world and the Arab-Islamic culture, so that the new emperors were surrounded by Muslim scholars as advisors, although the official religion was Christianity.

And when he was elected, crowned, and blessed by the Holy Pope as Holy Roman Emperor, he did not see himself as Emperor of Germany alone, but rather saw himself as dominant over all Christians, Emperor of all the world, like Caesar or Charlemagne, and chose to remain in the south in Palermo, and he spent in Germany of his long era only 9 years.

Excessive passion for science and culture, Frederick II surrounded himself with scholars from Christians, Jews and Muslims, and he was so fond of mathematics and experimental sciences that he did terrible things by allowing experiments on humans, and this is not surprising, because a king of those ages does not rule out that atrocities will take place at his hands.

Although Frederick II respected Islam and loved the Arabs, he did not hesitate for a moment to abuse Muslims when they revolted in Sicily, and although he spent his life in wars and led battles with violence, he also knew how to be tolerant to an amazing degree, according to the report of the French newspaper.

Like all medieval kings, Frederick II was in constant competition with the Pope, who is also the head of all Christians, and he promised him in order to obtain his blessing during his coronation by participating in the Crusades and restoring Jerusalem, but he tarried for a long time until the Pope expelled him from Christianity.

And then Frederick II decided to go in 1228 in a campaign that is stranger than fiction, a Christian campaign led by an emperor cursed by the Pope to restore the holy city to European Christians, and indeed he returned with what his predecessors of kings could not, he regained Jerusalem without shedding a drop of blood, by signing an agreement with his friend King Egypt in 1229.

Sultan al-Kamil ibn al-Adil al-Ayyubi handed over Jerusalem to the Roman emperor under a 10-year peace treaty. The Roman emperor entered the Church of the Holy Sepulcher to be crowned king of Jerusalem before the Khurazem clans and the forces of the righteous Sultan Ayyub ibn al-Malik al-Kamil took it back in July 1244.