(Observation of the Two Sessions) Foreign media focus on the Two Sessions: Key words, the general trend of the investigation is looking forward to the answer from China   China News Agency, Beijing, March 6 (Reporter Ma Jiajia) China is at the time of the National Two Sessions. As the annual "information event", the two sessions also attract the attention of the world. Multinational media hope to 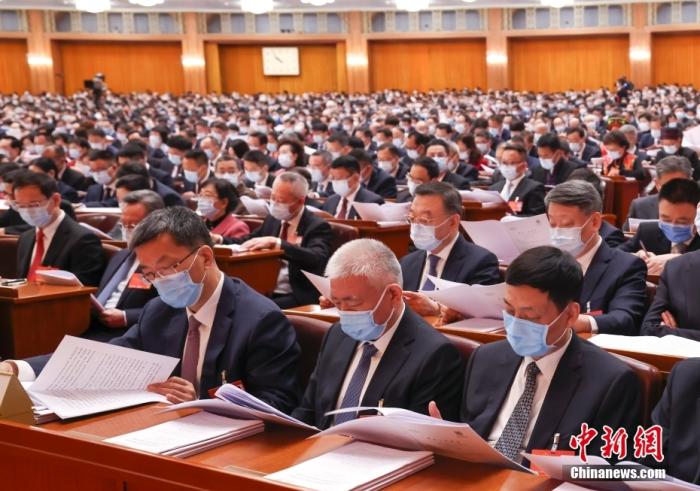 As the annual "information event", the two sessions also attract the attention of the world.

Multinational media hope to use this as a window to observe policy trends and listen to China's progress.

On the 5th, China's government work report was released, and foreign media have paid close attention to it. From the key words such as "GDP growth target", "seeking progress while maintaining stability" and "expanding opening up", they observed the general trend, looked at the future, and found China's answer.

Data map: On March 5, the Fifth Session of the Thirteenth National People's Congress opened in the Great Hall of the People in Beijing.

The economic data in the government work report has always been the focus of foreign media's attention, and it is also considered an important reference for all parties to judge China's economic trend.

The article pointed out that China's gross domestic product will grow by 8.1% in 2021, exceeding the previously set target of 6%, thanks to the pull of strong exports.

This year, China, the world's second largest economy, will focus on stabilizing the macroeconomic market and insist on making progress while maintaining stability.

Japan's Kyodo News commented that China's 2022 economic growth target was higher than the 4.8% previously forecast by the International Monetary Fund.

The US "Wall Street Journal" analyzed that the risks and challenges faced by China's development this year have increased significantly, and the GDP growth target has been set at around 5.5%. to be realized.”

The US Consumer News and Business Channel (CNBC) affirmed China's economic growth, commenting that China's GDP will grow rapidly in 2021, and China is the only major economy in the world to achieve positive economic growth in 2020. All while the world is still battling Covid-19.

"Expanding opening up" and environmental protection are also topics of concern to foreign media.

The Russian Satellite Network pointed out that the Chinese government work report proposed to expand a high level of opening up to the outside world and promote the steady development of foreign trade and foreign investment.

The article lists a number of policies released by China, including taking multiple measures to stabilize foreign trade, actively utilizing foreign capital, jointly building the "Belt and Road" with high quality, and deepening multilateral and bilateral economic and trade cooperation.

The Associated Press issued a document saying that the Chinese government has made commitments on many issues such as reducing taxes and fees, ensuring food and energy security, and especially promoting the construction of solar, wind and other renewable energy sources.

Thailand's "Bangkok Post" reported that China is also committed to reducing pollution and carbon emissions when formulating policies to boost the economy.

China has stated that it will strengthen the clean and efficient use of coal, promote energy-saving and carbon-reducing transformation of coal-fired power plants, increase the power grid's capacity to absorb renewable energy power generation, and increase pollution control efforts in important rivers, lakes and bays.

What kind of signal will China's government work report send?

But he also spoke with confidence, emphasizing that the fundamentals of China's long-term economic growth will not change, and that China has accumulated rich experience in dealing with major risks and challenges, and the economy will definitely withstand the downward pressure and will continue to grow steadily.

The New York Times previously reported that the Chinese government expects to increase its confidence in the Chinese economy through this annual meeting: "Despite the adverse factors, the Chinese economy, which is the engine of global growth, will maintain its upward momentum."

The German Handelsblatt website also reported that China's National People's Congress held its annual meeting in Beijing on the 5th.

The meeting will provide an overview of the government's priorities and the focus of this year's work.

Given the likely pressure on the economy, the focus this year will be on maintaining stability.

Latin America also believes that China's focus during the two sessions will include how to maintain stable economic and social development in the face of increasingly severe external challenges.