Moroccan journalist and human rights defender Omar Radi was sentenced on appeal overnight from Thursday to Friday to six years in prison in a double case of "espionage" and "rape... 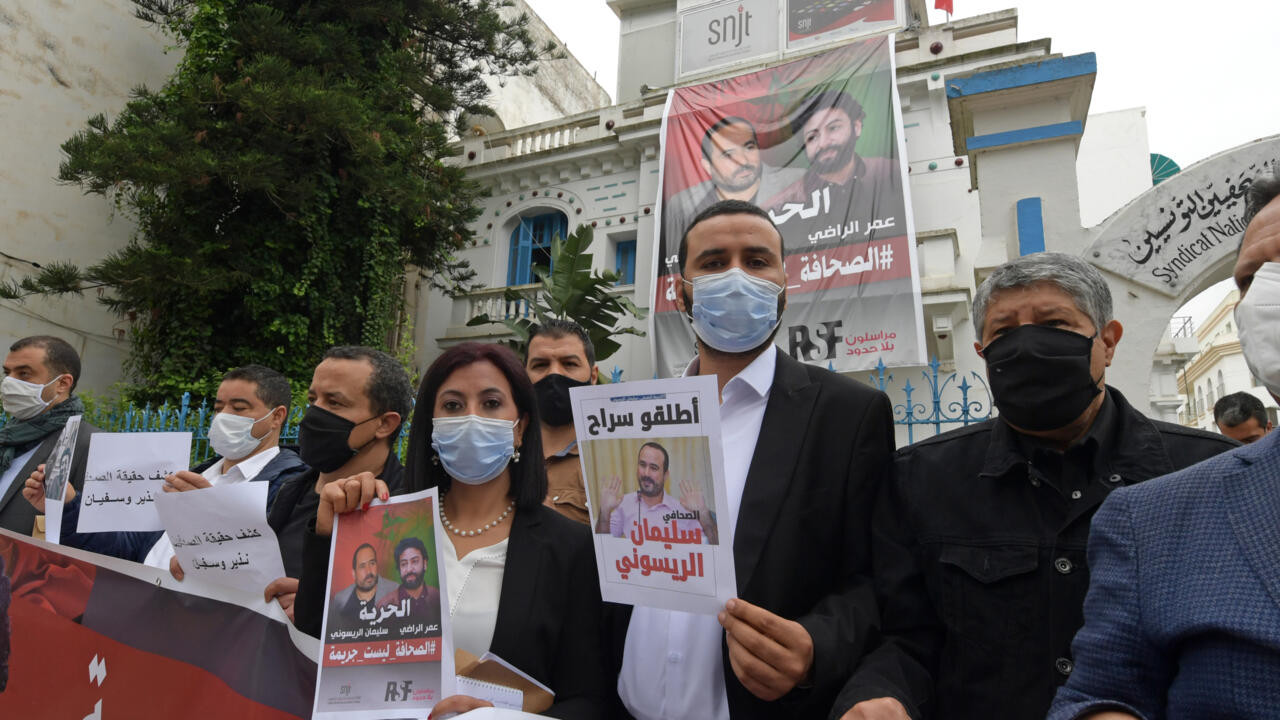 "It's a very harsh judgment. We have presented all the elements proving the innocence of Omar Radi before the court but nothing has been taken into account," Miloud Kandil, lawyer for Omar Radi, told AFP. the defence, which will appeal in cassation.

He is the second Moroccan freelance journalist sentenced in a week to a severe prison sentence for charges with a sexual connotation, after his colleague Soulaimane Raissouni.

Mohamed Yassine Jelassi, President of the Tunisian Journalists Syndicate during a rally in support of imprisoned journalists Omar Radi and Souleiman Raissouni, on the occasion of World Press Freedom Day, in Tunis, May 3, 2021 FETHI BELAID AFP

On Tuesday, the prosecution had demanded "the maximum sentence against the accused with regard to the incriminating elements".

Rape is punishable by ten years' imprisonment in Morocco.

"This iniquitous verdict is the logical conclusion of a trial that has lost all credibility through violations of the rights of the defense," said Ahmed Benchemsi, communications director at Human Rights Watch (HWR).

"The espionage charges were inadmissible because they were based on nothing. As for the accusation of rape, it would have deserved a fair trial, both for the accused and for the complainant", lamented Mr. Benchemsi who castigated "a parody justice, a vendetta against Omar Radi".

In a tweet, Reporters Without Borders (RSF) on Tuesday denounced "judicial harassment" against @OmarRADI and called on King Mohammed VI to "finally intervene to protect press freedom".

Arrested and charged in July 2020, the 35-year-old reporter, known for his critical positions towards power, was prosecuted for "undermining the internal security of the State" with "foreign financing" and for "rape", two separate cases, heard and judged jointly.

Omar Radi's mother during a demonstration of support in Casablanca on September 22, 2020 FADEL SENNA AFP

According to the prosecutor, Mr. Radi met Dutch diplomatic representatives presented by the prosecution as "intelligence officers".

The journalist was also accused of having "provided espionage information" to two British economic consultancies.

Mr. Radi explained that he had carried out "verification audits" for these two firms but, specializing in economics, he said that he had only done his job as a journalist based on data open to the public.

Among the other elements in charge: funding received from a philanthropic foundation based in Geneva, Bertha.

Mr. Radi says it was a research grant on land grabbing in Morocco.

But the public prosecutor judged that the journalist had collaborated with a foundation "hostile to the territorial integrity of the country", in reference to the Western Sahara which Morocco and the separatists of the Polisario Front are fighting over.

The investigation for "espionage" had been opened at the end of June 2020 after the publication of a report by Amnesty International claiming that Mr. Radi's phone had been hacked by the Moroccan authorities via the Israeli software Pegasus.

In the second case, the complainant, a former colleague of the journalist, testifying behind closed doors, repeated that she had been "victim of rape".

Omar Radi's mother during a demonstration in support of the journalist in Casablanca on September 22, 2020 FADEL SENNA AFP

"On behalf of the civil party, we believe that the compensation is not fair for all that the victim suffered," protested the plaintiff's lawyer, Me Aïcha El Guellaa.

Omar Radi, supported by a solidarity campaign in Morocco and abroad, has always claimed to be prosecuted because of his writings, in particular in favor of social movements and against corruption.

The Moroccan authorities, they assure that his trial "has nothing to do with his journalistic work".

Another journalist Imad Stitou, 32, was sentenced to one year in prison, including six months, in the same rape case.

Mr. Stitou was first presented as the only defense witness before being prosecuted in a state of freedom during the investigation.

Judged in his absence, Mr. Stitou left Morocco for Tunisia.

“It is their justice and our destiny… Omar, you were the last test of the state of health of this sick country”, he tweeted immediately after the verdict.