With his Emirati clothes and his Chinese language, the young Ahmed Mohammed Al Nuaimi (17 years old) succeeded in attracting the attention of visitors to the China Pavilion at the "Expo 2020 Dubai", and arousing their curiosity to know how to master that language, and the reasons for choosing it specifically. secondary 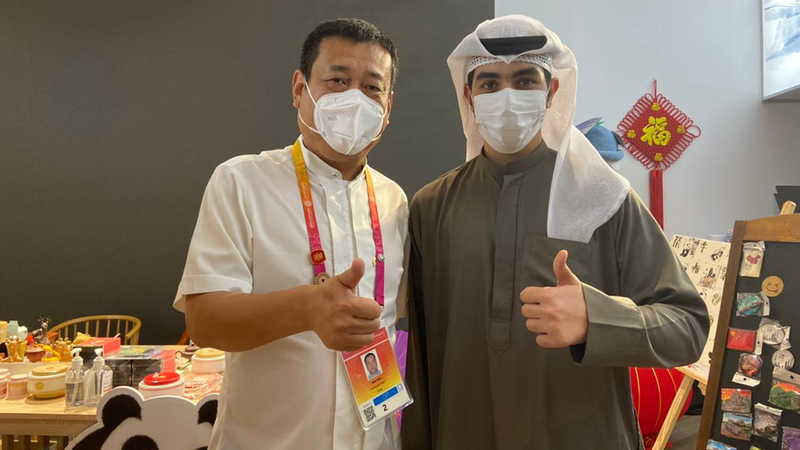 With his Emirati clothes and his Chinese language, the 17-year-old Ahmed Mohammed Al Nuaimi succeeded in attracting the attention of visitors to the China Pavilion at Expo 2020 Dubai, and arousing their curiosity to know how to master that language, and the reasons for choosing it specifically.

Ahmed Al-Nuaimi, a student at Al-Dahmaa School for Secondary Education in Al Ain, is the first Emirati to volunteer at the China Pavilion, having mastered its language fluently, considering that the international exhibition is a golden opportunity to practice and develop this language with its native speakers.

After obtaining a high school diploma, he aspires to obtain a scholarship to China, specializing in political science, to represent the UAE in the diplomatic field with pride.

The beginning of the march

Ahmed Al Nuaimi told "Emirates Today": "He learned the Chinese language within the program (Emirates Youth Ambassadors), with the encouragement and support of the Early Processing Program of the Abu Dhabi Investment Authority missions, which qualified a group of about 25 students to learn a new language, and Ahmed was given the choice between Russian and Chinese, and he chose the latter to start the march with it.”

He explained that "his preference for the Chinese language is due to several reasons, including that it is one of the most difficult and most widely spread languages ​​in the world, in addition to the distinguished bilateral relations between China and the UAE, and that China is concerned with scientific and technological research and development."

Regarding the most prominent difficulties he faced in learning, Al-Nuaimi indicated that it was represented in the lack of people who wanted to learn it among the Emiratis and Arabs in the country, pointing out that his constant quest to practice it made him surpass it within eight months, and the “golden opportunity” represented by “Expo 2020 Dubai” came. ».

The young Emirati added: "The global event hosted by our country is a golden opportunity for me that cannot be missed, through which I can practice the Chinese language and work to develop it with its speakers, and accordingly I was keen to seize it by volunteering to work in the China Pavilion and practicing that language, developing it with its speakers, and getting to know more to the culture of that country.

Al-Nuaimi stressed that the experience of volunteering in the China Pavilion, which displays the diverse culture of that country and its ancient history by combining, in an artistic way, Chinese elements and modern technologies, played a major role in developing his language, through direct contact with the Chinese working in the pavilion, in addition to visitors, He also succeeded in getting to know a wide range of them, which instilled in him greater confidence, as he put it.

• 17 years old, Omar Ahmed, who is the first Emirati volunteer in the China Pavilion.

• "I was keen to volunteer at the China Pavilion, practice the language, develop it with its speakers, and get to know more about the culture of that country."

Ahmed Al-Nuaimi said that he has many hobbies and talents. He has experience in writing short stories, through the story (The Great Challenge), which he published in (Majid) magazine. He is also fluent in playing the lute, and he has participated in various sports and tournaments, including horse riding , as well as Jiu-Jitsu, which found in China and Japan fertile soil for development.