Finland's Kalle Rovanperä (Toyota) won Rally Sweden on Sunday, the second round of the WRC World Rally Championship, and expressed his sympathy for the… 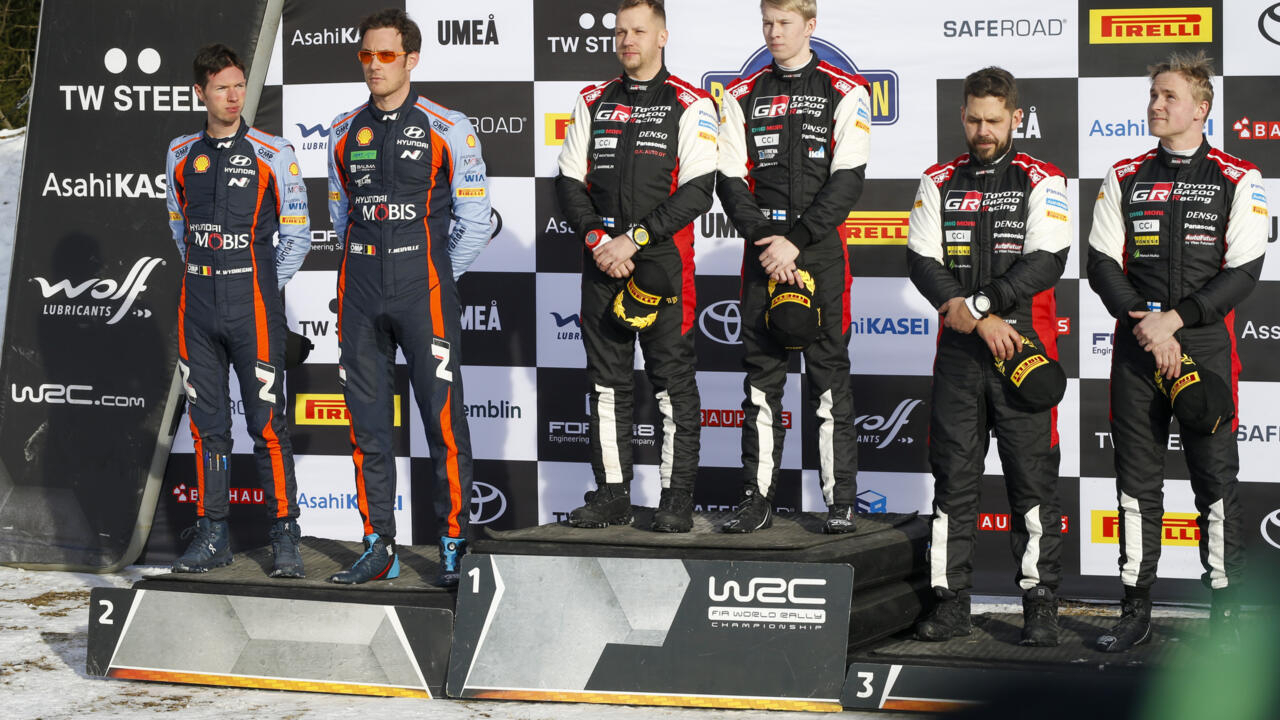 "I don't want to celebrate too much today because it's been a very difficult week for people in Ukraine," said the 21-year-old, who wins his third WRC championship event after triumphs in Estonia and Greece. last year.

He also takes the lead in the provisional classification of the world championship.

However, he could have let his joy explode because he won the Swedish rally 21 years after his father Harri Rovanperä.

Rovanperä dominated the event, contested on snowy and icy roads, head and shoulders winning six of the 17 special stages contested.

Finnish driver Kalle Rovanperä and his co-driver Jonne Halttunen winners of the Swedish rally, driving their Toyota on February 27, 2022 in Umeaa (Sweden).

The French Sébastien Loeb and Sébastien Ogier, who finished first and second in the Monte Carlo rally in January, the inaugural event of the championship, did not take part in the Swedish rally as they were both in semi-retirement.

Rovanperä thus clearly marks its ambitions to succeed them at the top of world rallying while the two French drivers will only compete in a limited number of championship events this year.

"I'm happy to be on the podium after the troubles in Monte Carlo and it was impossible to get Kalle," said the Belgian driver who preferred to ensure rather than risk going off the road.

Another favorite of the championship, the Briton Elfyn Evans (Toyota), could not avoid, like many others, crashing his car on Sunday morning on the snow embankments bordering the road while he was in 2nd place. of the race.

Evans, winner of the last edition of this rally in 2020, was trying to make up for lost time after receiving a ten-second penalty following a spectacular incident during the last special stage of the day on Saturday.

Belgian driver Thierry Neuville and his co-driver Martjin Wydeghe at the wheel of their Hyundai during the Swedish rally which they finished in second position on February 27, 2022 in Umeaa (Sweden).

He had crossed the finish line in an unorthodox way by jumping in spite of himself over a snow bank to find himself in a parking lot, without damage to his car.

He had however passed just before his exit in front of the photoelectric cell marking the finish line but the organizers judged that he had not followed the delimited route.

Another favorite, Estonian Ott Tänak, 2019 WRC world champion, also had to retire due to an alert on the hybrid engine of his Hyundai preventing him, according to the regulations, from continuing.

He did not hide his displeasure by calling the obligation to withdraw from the race while his car was in working order a "bad joke".

He can however console himself with the 5 points scored in the championship with his best time in the last "power stage" special.

According to WRC regulations, drivers who have abandoned during the event can leave to take part in it.

The other happy Finn of the day is Esapekka Lappi who made his return to the WRC to replace Sébastien Ogier at Toyota after a season's absence and who climbed to 3rd place on the podium.