The crash of a booby-trapped drone in the village of Al-Jadiyin, Jizan

Today, Saturday, the Arab Coalition to Support Legitimacy in Yemen announced the downing of a booby-trapped drone in the Jizan village, without casualties or damage. 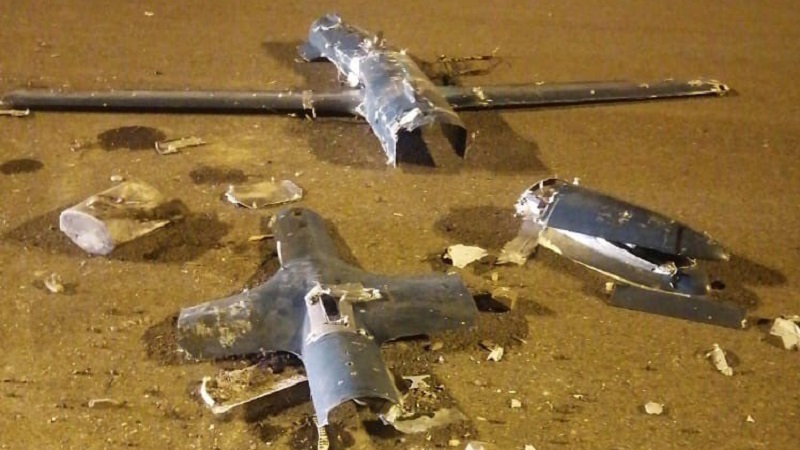 The crash of a booby-trapped drone in the village of Al-Jadiyin, Jizan

Today, Saturday, the Arab Coalition to Support Legitimacy in Yemen announced the downing of a booby-trapped drone in the Jidyan village in Jizan, without injuries or damage.

The coalition confirmed that there were 15 targeting operations against the terrorist Houthi militia in Hajjah during the past 24 hours, pointing out that 9 military vehicles were destroyed and there were human losses among the militias.

The fronts of four Yemeni governorates, Hajjah, Marib, Taiz, and Saada, witnessed an escalation in combat operations between the legitimate Yemeni forces on the one hand, and the terrorist Houthi militia on the other, leaving many dead and wounded among the militias, including prominent field leaders, as well as the destruction of vehicles. Fighting, and booby-trapped marches.

Field sources in Hajjah confirmed the intensification of confrontations on the Haradh and Abs fronts, explaining that the Yemeni army forces are approaching the Houthi camp, which is under fire from the forces that began shelling it with heavy artillery, achieving direct casualties, noting that the coalition fighters targeted the camp with a series from the raids.

The sources stated that the militias incurred heavy losses in equipment, as combat mechanisms were destroyed, and a drone launched by the militias towards the Hayran district was shot down, bringing the number of marches that were shot down in Hajjah during the past 24 to four.

In Saada, the Yemeni army forces continued their combat operations, and the sources confirmed the liberation of "Tabab al-Wahsh wa al-Khayal", and the forces began targeting sites where Houthi elements and various combat mechanisms were stationed.

In Taiz, the army and resistance forces advanced in the Salh area east of the city and one of the valleys, after violent battles waged during the past few hours against the militias, which led to the collapse of the advanced positions of the Houthis.

In Marib, the battles continued on the southern front, and were concentrated in the vicinity of the Al-Rardha Mountains, leaving dead and wounded among the militias. The coalition fighters also targeted Houthi reinforcements in al-Juba, which led to the destruction of Houthi combat mechanisms and the death and injury of a number of militia members.

In Sanaa, the US embassy said that the Houthi militia had kidnapped two embassy employees, Abd al-Rahman Saif al-Sharabi, assistant head of the media attaché at the embassy, ​​and his colleague Nabil Sultan, while continuing to detain 11 other employees for several months.

In Al-Hodeidah, the deteriorating living conditions in the Houthi areas prompted a twenty-year-old man named Muhammad Mahdi to commit suicide, after he was unable to provide for his five children and his sixth pregnant wife, bringing the number of suicides in Yemen since the beginning of this year to six cases distributed over Sana’a. Ibb, Mahwit and Hodeidah.