Syria Now! and PP create a working group to seek a parliamentary majority that allows Mañueco to govern alone without Vox

PP and Soria Now! have agreed this Saturday to create a working group with the aim of drafting a "parliamentary agreement" along with other formations that... 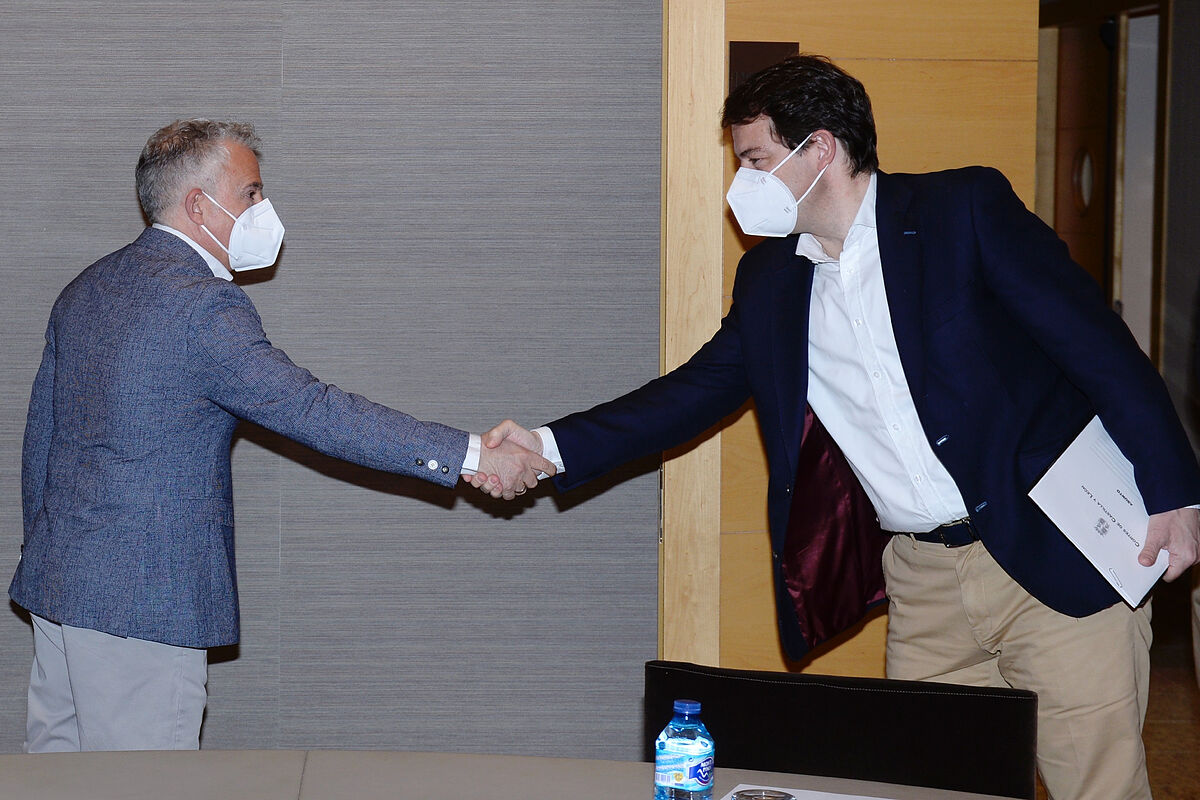 They have agreed this Saturday to create a working group with the aim of drafting a "parliamentary agreement" together with other formations that allow the PP a government alone in Castilla y León without the presence of Vox that, in the case of entering the Executive, would provoke the rejection of the local formation.

The acting president of the Board, Alfonso Fernández Mañueco, and the spokesman for Soria ¡Ya!

-party that got three attorneys in the last elections-,

, held a meeting this Saturday framed within the round of contacts of the PP to achieve a governance agreement in the community.

Although the sum of attorneys from the PP (31) and from Soria ¡Ya!

(three) does not reach the number of 41 seats required for an absolute majority in the community, both formations have emerged satisfied from a meeting in which the people of Soria have guaranteed support for the investiture of Mañueco as long as their demands are met and that the formation of Santiago Abascal does not enter the Executive.

"If Vox enters the Government, we would not be necessary and our demands would therefore not be heard," argued Ceña, who has recognized that the best option at the moment is for the PP to govern alone with the support of other formations always reaching programmatic agreements.

The acting president and candidate for re-election has also left the meeting satisfied, who has expressed his wish that all the meetings he has had and those that still remain are as "cordial" as the one he has closed with Soria ¡Ya!

Of his demands, Mañueco has placed the red line of his party on equality between the provinces, in such a way that there are no grievances in order to favor one in particular, such as

, although he has specified that many of the demands of This training is already contemplated within the PP program, such as radiotherapy, tax rebates or other measures to tackle depopulation, he cited.

It needs the abstention of the PSOE

Asked about the need to add the support of at least seven other prosecutors to achieve his investiture -he could only achieve it with the support of Vox or with the abstention of the PSOE-, Mañueco has specified that this meeting is only a "first step", Well, "we will see later" how that parliamentary majority would be formed.

In this way, Mañueco has underlined that this Saturday's meeting does mean "opening the doors" to the possibility of an agreement that brings together other forces, such as the

, with whom he will meet in the coming days, for a parliamentary agreement under a "solid, strong and lonely" PP government.

In fact, the spokesman for Soria ¡Ya!

He has indicated that he will also hold meetings with other formations to probe the possibility of reaching a "great agreement" that allows a PP government with the support of other formations, although this scenario would force the PSOE to abstain -at least two of its attorneys- so that Mañueco was invested alone without requiring the support of Vox.

Finally, asked about the accusations of the elected attorney of Cs, his former vice president Francisco Igea, who called Mañueco a "coward" for not wanting to meet with the formations that obtained a single attorney, the candidate for re-election has assured that "he does not have nothing to say" about the evaluations of other people, he added.