Won Hee-ryong, head of the policy division at the People's Power Ancestral Headquarters, said today that he had obtained a 'Daejang-dong Documents Packet' that was dumped in a drain near the exit of Bundang on the 2nd Gyeongin Expressway between Anyang and Seongnam. 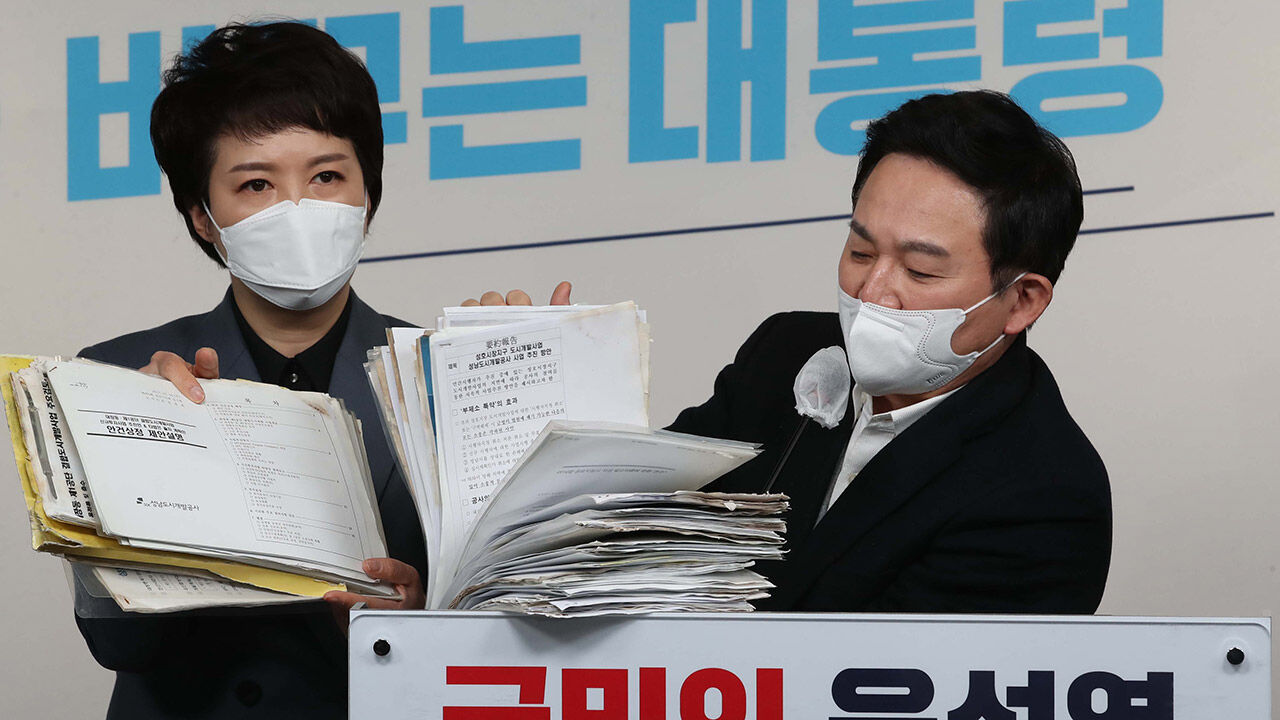 Won Hee-ryong, head of the policy division at the People's Power Ancestral Headquarters, said today (25th) that they had obtained a 'Daejang-dong Documents Packet' that was dumped in a drain near the exit of Bundang on the 2nd Gyeongin Expressway between Anyang and Seongnam.

Director Won held an 'Emergency Press Conference on Daejang-dong' at Yeouido this morning and revealed that the bag is believed to belong to Attorney Min-yong Jeong, who was the head of the strategic business team at Seongnam Urban Development Corporation at the time of the Daejang-dong development project.

There were dozens of documents in a black cloth bag, and some of them were wet or damaged. That was the explanation of the general manager Won.

Director Won said, "A report that Lawyer Jung received approval from the mayor of Seongnam at the time of Lee Jae-myung alone."

He added, "As the combined development changed to separate development, the actual floor area ratio preference of about 2,700 households was given to the Daejang-dong party."

Director Won said, "According to the so-called 'karaoke transcript' on October 30, 2020, of the Daejang-dong party, Kim Man-bae said 'Min-yong is also 10 billion won'"

This was approved by Mayor Lee Jae-myung at the time of June 12, 2017, and there are three ways to utilize the dividend income '182.2 billion won' of the business.

According to the report released by Director Won, Seongnam City Corporation has a plan to build 1,200 rental apartments in blocks A9 and A10, and a plan to receive in cash (182.2 billion won) without buying land for rental housing.

Director Won said, "It is not easy to build a rental apartment because it costs a lot of money."

Director Won said, "In the end, at the time of Lee Jae-myung, the mayor of Seongnam decided to give up the rental apartment business and receive cash that the mayor could use at will. said.

Among the documents released today, there was a notice of approval of the Seongnam Urban Planning Facility (Neighborhood Park of Industrial Complex No. 1) project.

According to Director Won, on June 16, 2017, Lee Jae-myung, the mayor of Seongnam at the time, announced that 234 billion won would be required for the park project in the 1st Industrial Complex.

Director Won Won said, "Even if candidate Lee Jae-myung made the announcement, he continued to publicize that 276.1 billion won was recovered from the 1st Industrial Complex Park project during the Gyeonggi governor election in June 2018. “Return 550.3 billion won,” and at the street campaign, he said, “I earned 550.3 billion won without spending a single penny, and I spent it happily.”

Director Won pointed out, "The prosecution couldn't even find the cell phone that Dong-gyu Yoo threw out the window on the day of the search and seizure, and now it's impossible to find the package of 'Daejang-dong Documents' that Jung Min-yong threw on the highway and was in the drain."

He said, "Jung Min-yong, who overtly destroyed evidence, is still under investigation without detention. I can't help but doubt whether the prosecution is willing to reveal the truth of the case." added.