This year marks the 50th anniversary of President Nixon's visit to China and the signing of the Shanghai Communiqué. On the evening of February 24, local time, the 50th anniversary of the "Icebreaker" was grandly held at the Nixon Library in Yorba Linda, California, the hometown of former US President Richard Nixon. The picture shows Qin Gang, Chinese Ambassador to the United States, attending the 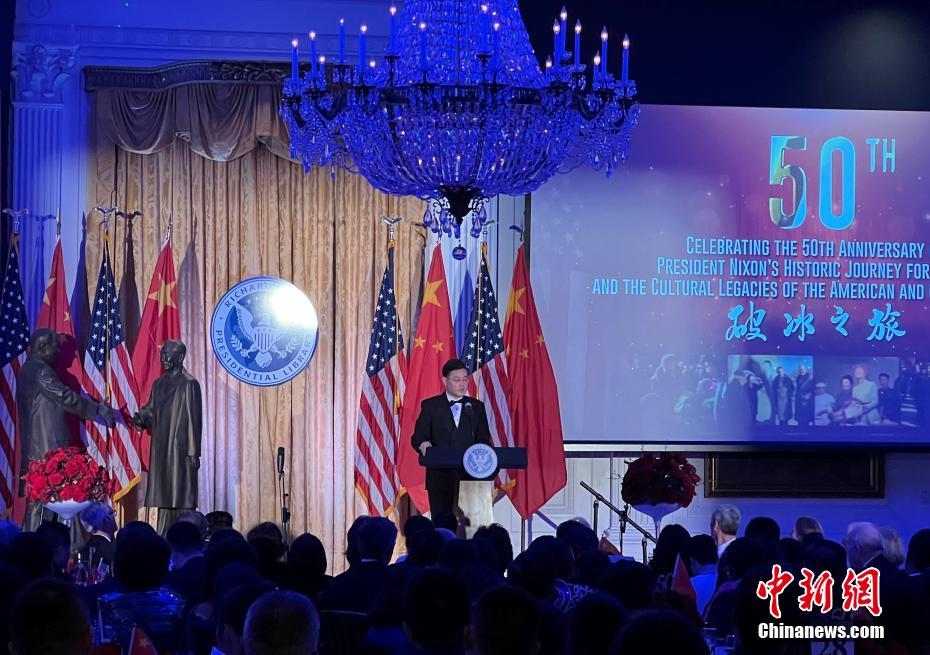 This year marks the 50th anniversary of President Nixon's visit to China and the signing of the Shanghai Communiqué.

On the evening of February 24, local time, the 50th anniversary of the "Icebreaker" was grandly held at the Nixon Library in Yorba Linda, California, the hometown of former US President Richard Nixon.

The picture shows Qin Gang, Chinese Ambassador to the United States, attending the commemorative event and delivering a keynote speech.

On the evening of February 24, local time, a commemorative event for the 50th anniversary of Nixon's visit to China themed "Icebreaker" was grandly held at the Nixon Library in Yorba Linda, California, USA.

Qin Gang, Chinese Ambassador to the United States, attended the commemorative event and delivered a keynote speech. This was his first visit to the West Coast of the United States since taking office on July 28, 2021, and was warmly welcomed by local Chinese and American people from all walks of life.

Qin Gang first said in his speech that he was very happy to come to President Nixon's hometown and to commemorate with everyone in the library named after him the historic visit to China by President Nixon and the publication of the Sino-US "Shanghai Communiqué" 50 years ago.

History is the best teacher. It faithfully records the footprints of China-US relations and provides inspiration for future development.

President Nixon's landmark diplomatic action 50 years ago was the pinnacle of his pragmatic diplomacy, and the precious legacy left by the leaders of the two countries is still of great practical significance today.

China-US relations have come to a new historical juncture and are in a new round of mutual discovery, recognition and adjustment, seeking ways to get along in the new era.

Whether China and the U.S. can handle each other's relations well has a bearing on the future and destiny of the world. It is a question of the century that must be answered by the two countries.

The common interests of China and the United States have never been wider than they are today, and have become an inseparable bond that binds us together.

In his speech, Qin Gang used the American football game, the Beijing Winter Olympics and "Ping-Pong Diplomacy" to explain Sino-US relations and won applause from the audience.

He said that competition between China and the US is inevitable. The question is how to compete?

I congratulate the Los Angeles Rams for winning this year's "Super Bowl", but the relationship between China and the United States is obviously different from the fierce American football game. Wei captures and kills".

Another scene is the just-concluded Beijing Winter Olympics. Athletes from China and the United States competed on the same field. They encouraged each other, fought bravely, and surpassed themselves.

In this situation, everyone must say like me, there are no losers here, only win-win.

Qin Gang said that President Xi Jinping pointed out that China and the United States should respect each other, coexist peacefully and cooperate for win-win results.

Let us work together to bring China-US relations back to the right track at an early date, continue to benefit the two peoples, and comply with the general expectations of the international community.

Henry Kissinger, a witness of Nixon's visit to China this year, who is 99 years old this year, and former US Secretary of State, delivered a speech at the commemorative event through video.

Nearly 400 Chinese and American representatives including Zhang Ping, Consul General of China in Los Angeles, Christopher Nixon Cox, the grandson of former US President Richard Nixon, Jim Byron, President of the Nixon Foundation, Xie Ming, director of the Nixon Foundation, Chinese-American entrepreneur and philanthropist People from all walks of life attended the meeting.

In an interview with reporters, Xie Ming said that on the occasion of President Nixon's visit to China and the 50th anniversary of the signing of the Shanghai Communiqué between China and the United States, it is a great honor to hold this commemorative event.

The "Icebreaker" 50 years ago kicked off a week that changed the world.

We are all here today to commemorate the visit, as we are all beneficiaries of the profound impact this week has had.

Over the years, the Nixon Foundation has been committed to promoting the development of U.S.-China relations.

It is worth mentioning that the commemoration of the day was full of "details with stories".

According to reports, the Nixon Foundation prepared the dinner with the specifications of the White House state banquet, and invited the Shanghai Tang Restaurant Group in Los Angeles to design the delicacies.

On the dining table, the vivid "ping-pong balls and rackets" dishes, vivid "giant panda" desserts, and the same wine of Nixon's visit to China 50 years ago are very popular among Chinese and American guests.

Lu Qiang, honorary chairman of the Southern California Federation of Chinese Associations and chairman of Shanghai Tang Restaurant Group, told reporters that we want to tell the story of China and China-US diplomacy through Chinese food, and hope that through this feast, everyone can "taste" the "ice-breaking" Brigade” and the deep meaning of Sino-US friendship.