Iraq: restoration of three sculptures destroyed by IS jihadists

Iraq on Thursday unveiled three sculptures restored after their destruction by the Islamic State (IS) group, which had filmed its jihadists shooting and attacking with pickaxes the antiquities of the city of ... 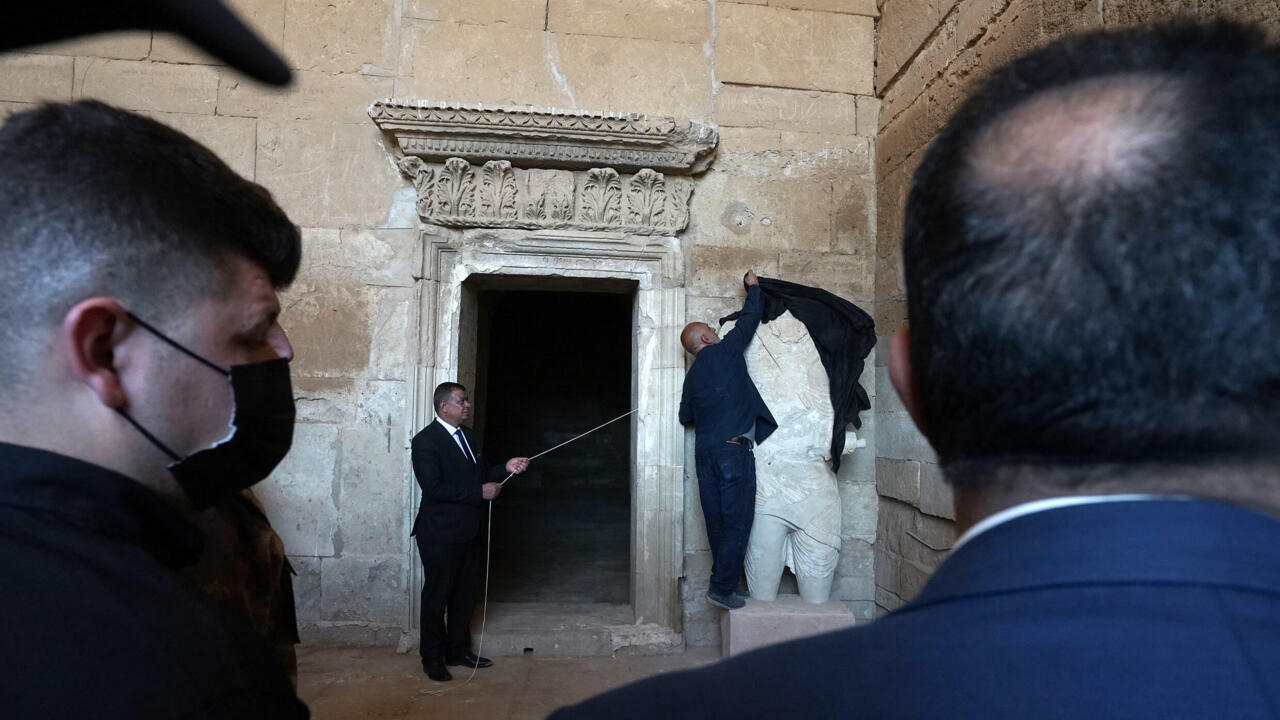 A ceremony was held Thursday on the archaeological site classified as World Heritage in Danger by Unesco, a hundred kilometers southwest of Mosul, the former "capital" of the jihadists reconquered in 2017 by Iraqi forces.

The sculpture of a life-size bust, of Roman inspiration, but also faces carved on the wall of the large temple near an arch were revealed to the media.

These pieces were "broken and torn from their place, the fragments were found at the four corners of the site", indicates Khair al-Din Ahmed Nasser, head of Antiquities of the province of Nineveh.

A statue restored after being vandalized by the IS group unveiled on February 24, 2022 at the ancient site of Hatra, in northern Iraq Zaid AL-OBEIDI AFP

"We recovered some pieces. There were missing fragments, they were replaced by the same type of stone," he added.

Located in a desert region, the city of Hatra built in the 2nd or 3rd century BC was an important religious and commercial center under the Persian empire of the Parthians.

It was endowed with imposing fortifications and housed magnificent temples, combining Greek and Roman architecture with elements of oriental origin.

IS released a video in 2015 showing its fighters destroying sculptures on the walls of a building in Hatra, shooting them and attacking a statue with a pickaxe.

The restoration work was carried out by Iraqi experts in collaboration with ISMEO, the International Association for the Study of the Mediterranean and the Orient (Italian institution) with funding from ALIPH, the International Alliance for heritage protection.

Other rooms are being renovated, according to Mr. Nasser.

Aerial view of the ancient site of Hatra, in northern Iraq, on February 24, 2022 Zaid AL-OBEIDI AFP

Jihadists filmed similar abuses at the Mosul Museum and in neighboring Syria in Palmyra.

After its rise to power in 2014 and the conquest of vast territories in Iraq and Syria, the jihadists were routed by offensives launched in these two countries.

Iraqi forces declared victory at the end of 2017.

Iraqi antiquities have been looted for decades thanks to the many conflicts that have torn the country apart, particularly after the arrival of IS jihadists who engaged in this lucrative trade to replenish their coffers, but also after the 2003 American invasion.