Barcelona did not leave a shadow of hope in Naples by clearly winning (4-2) Thursday in the Europa League return play-off, confirming the Catalans as the big favorites to conquer one of the... 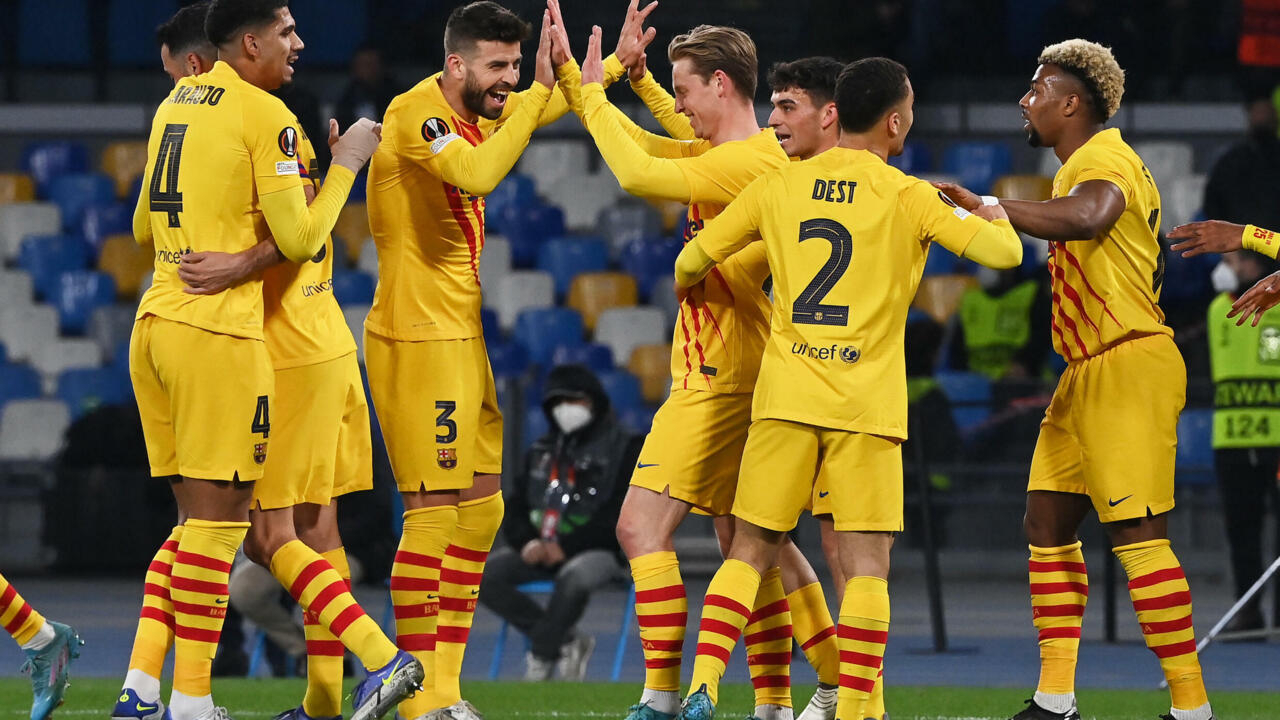 Two goals from Alba and de Jong in the first quarter of an hour put this Barça into orbit, once again conquering, after the draw in the first leg (1-1).

Naples, despite a reduction in the score on a penalty from Lorenzo Insigne (23rd), not in a great evening and released under the whistles at the end of the match, never recovered.

Barcelona stunned the match thanks to Pique (45th) just before the break and then Aubameyang (59th) after.

The spirit of Maradona, to whom the Neapolitan coach Luciano Spalletti had appealed before this duel between the two ex-clubs of the Argentine legend in the stadium that bears his name, was indeed with Barça.

Preceded by a message of peace for Ukraine with the deployment of a "Stop War" banner held by the players of the two clubs, the match started with a bang under the impetus of the Catalans.

It even seemed almost finished already in the first quarter of an hour after two lightning goals from Barça.

The first was signed Jordi Alba after an ultra-fast counter led by Adama Traoré after a corner badly played by Insigne (8th).

The second was the work of a subtle wrapped shot from Frenkie de Jong in the middle of a defense that remained in the locker room (13th).

Napoli caught up in speed

In the midst of a total domination of the Catalans, led by the attacking trio Traoré-Aubameyang-F.

Torres, Napoli had the merit of reducing the score on Victor Osimhen's first breakthrough.

The Nigerian, hooked by Marc André ter Stegen, obtained a penalty that Lorenzo Insigne converted to be forgiven for his initial error (23rd).

The joy of Naples striker Lorenzo Insigne, after reducing the score (2-1) on a penalty against FC Barcelona, ​​during the Europa League play-off second leg match, on February 24, 2022 at the Diego Armando Maradona Stadium ANDREAS SOLARO AFP

Which briefly revive the hopes of the 40,000 tifosi at the Maradona stadium.

But not really enough to curb the ardor of the Catalans, who are still so insistent against a Napoli totally overwhelmed and uninspired on their rare counterattacks.

Pique thus gave the Blaugrana some air just before the break, with the help of the post (45th).

And Pierre-Emerick Aubameyang was responsible for knocking out the Partenopei with a splendid recovery in the skylight (59th).

With this clear victory, mitigated by the late and anecdotal goal of Matteo Politano (87th), Barcelona confirmed their rebirth, finally seeming to have digested the departure of Lionel Messi.

Scarecrow of this competition that it has never won, the Catalan club aims in the event of victory for a significant financial windfall to compensate for its elimination from the Champions League and a path to the next C1, the winner of the League. Europa being automatically qualified in the Champions League.

Naples, whose squad was probably too tight to compete in both Europe and the race for the scudetto, will now be able to devote itself to the championship, where it will need Insigne, no doubt left vexed and defeated by the whistles that accompanied his replacement.