News summary on the way home from work, Subsletter Evening. Even today, many things have happened around the suspicion of Daejang-dong. Not only the political workshops, but also figures related to the allegations stood in front of the reporters. 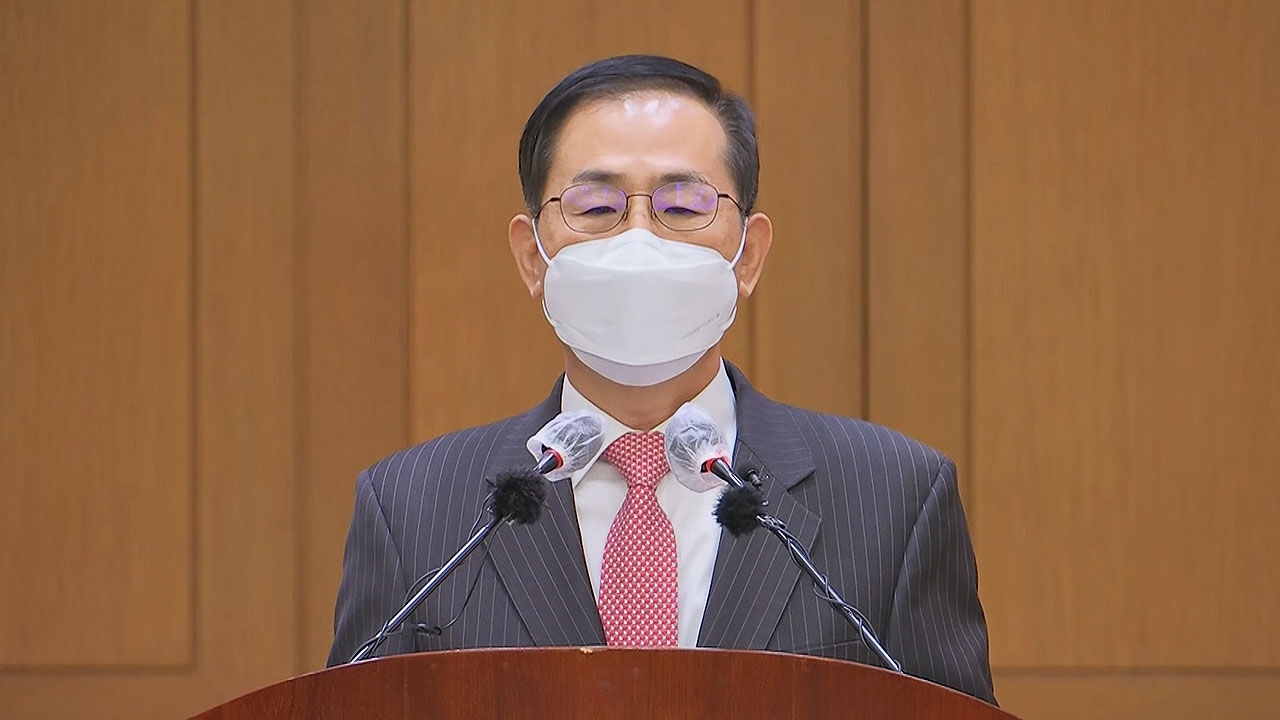 Today (23rd), a lot of things happened around the suspicion of Daejang-dong.

Not only the political workshops, but also figures related to the allegations stood in front of the reporters.

The Supreme Court Justice, who is the best among judges who speak only of judgment, voluntarily held a press conference.

As Democratic Party candidate Lee Jae-myung counterattacked the suspicion of Daejang-dong, the battle between the ruling and opposition parties came to the fore until the last minute of the election.

The first press conference of the incumbent Supreme Court Justice

According to a recent report by the Hankook Ilbo, Justice Cho Jae-yeon is the person designated as 'he' in the transcript of Daejang-dong.

On the 21st, the real name of the presidential candidate was also revealed in the TV debate.

Justice Cho, who is the party involved, has completely denied the allegations by holding a press conference.

First of all, I explained the background of the request for the press conference as follows.

"Things like this came out in the political arena, but I still tried to keep quiet as it was a serious time before the presidential election." "I couldn't sleep last night. After all, this morning, through a press conference, I was curious about what various media officials I respected. I thought it was right to reveal it."

Justice Cho explained the reason why each of the allegations were groundless.

He also said that although Kim and Sungkyunkwan University are alumni, that in itself cannot be a cause for suspicion.

Regarding the allegations that Kim Man-bae provided a residence to his daughter, he said, "I have been living in the current residence for nearly 30 years. I am living in Jukjeon because of my separation. My youngest daughter lives with me," he explained, adding, "None of me, my family, or my relatives have received an apartment in Daejang-dong."

Let's look again at the content related to 'He' in the transcript of Young-hak Jeong reported on the 18th by the Hankook Ilbo.

The Hankook Ilbo revealed that the transcript came from a transcript submitted to the prosecution by accountant Jeong Young-hak, owner of Cheonhwa-dongin No.

Whether 'he' received 5 billion villas just because Kim Man-bae and Jeong Young-hak actually had such a conversation should be revealed through investigation.

The reason 'He' drew public attention last year is because of the completely different content.

In the meantime, it has been known that there is a content in the transcript that 'half of the dividend of Cheonhwa-dongin No. 1 belongs to him'.

Some media reported it, and opposition parties attacked whether 'He' was Candidate Lee Jae-myung, and rumors of Lee Jae-myung's involvement arose.

There is still no transcript that reveals the relationship between Candidate Jae-myung Lee and Cheonhwa-dongin No.

Justice Cho held a press conference, but the content of Kim Man-bae's remarks and whether they are true or not have not been fully revealed, and the political arena is still the subject of a workshop.

Voters are also confused because it looks like they are arguing with each other by citing advantageous parts of the transcript.

“I played golf with the mayor (Lee Jae-myung)”…

Kim Moon-ki, the son of Seongnam Urban Development Corporation's 1st development director, who was found dead while under investigation by the prosecution also had a press conference.

The late Kim Moon-gi's son disclosed the circumstantial data that his father knew of candidate Lee Jae-myung even while he was in office.

Newly disclosed contents include photos of candidate Lee Jae-myung on a business trip to Australia accompanied by Kim during his tenure as mayor of Seongnam.

At that time, a video was released where the former director Kim said to his daughter, "I even played golf with the mayor and general manager today. Today was so much fun and we had a great time."

Kim's son said, "No condolences or condolences came to pass in the face of the death of his father, who had served faithfully for eight years." The candidate was seen dancing with me in a Santa Claus costume. My grandmother in her 80s watched this on TV and cried and beat her breast and burst into anger.

On Christmas Eve last year, the Democratic Party's electorate released a music video that was filmed in a Santa costume with her wife, Kim Hye-kyung, and was referring to it.

Democratic Party candidate Lee Jae-myung again expressed condolences for the press conference of the late Kim Moon-gi's son, but the election committee said, "I am also well aware that the pain of the bereaved family who had to say goodbye to an unexpected event is unfathomable." I opened the door.

Candidate Lee claimed, "Isn't it candidate Yoon who looked after criminal groups to raise seed money? He made the biggest contribution."

Also, I re-introduced the words of Manbae Kim, the major shareholder of Hwacheon Daewoo, which appeared in the so-called 'Transcript of Jeong Yeong-hak', "'We are quarreling with reporters, and Yoon Seok-yeol said that he won't look at me any more in the future, Yoon Seok-yeol will die with one of my cards. (Mr. Kim Man-bae) talked about his back, but objectively, who should be suspected?” he asked.

► Jae-myung Lee: Actually, this case is the Yoon Seok-yeol gate.

Because it was Yoon Seok-yeol who looked after this criminal group even after investigating them to raise seed money.

He made the biggest contribution.

Didn't he sell his father's house?

That's what the criminal group says.

Lee Jae-myung has been stabbed for 10 years, but his seeds are not eaten.

Lee Jae-myung is a communist.

They stole all our money.

It's a communist party, you say.

Jae-myung Lee He just harassed us.

Lee Jae-myung should never know what our money was exchanged for.

Isn't this all about the three of us?

These people cuss and fight with us about Yoon Seok-yeol.

Isn't it strange that he curses and fights with reporters?

Why would you lie to each other?

Also, Yoon Seok-yeol told me that he wouldn't be able to see me anymore.

The only person who did not receive money was Choi OO.

everyone else got it

Yoon Seok-yeol dies with one of my cards.

When he gets a warrant, he dies immediately.

Having said that, objectively, who should be suspected?

► Moderator: In that sense, you prepared a panel and asked a question.

► Jae-myung Lee: I clearly define it as the current president and the incumbent prosecutor, so it was not revealed, but this is the prosecutor's gate.

So I made a suggestion.

Senior Spokesperson Cho Seung-rae also commented, "As the truth about the Hwacheon Daeyu Gate is revealed, the innocence of Candidate Lee Jae-myung is becoming more certain. If candidate Yoon Seok-yeol does not apologize in the end, there is no other choice but to raise other suspicions. ' Suspicion that they continue to use force to hide the essence of '" and joined the counterattack.

"Lee Jae-myung's body" Opposition tightens the reins of the offensive

People's Power Candidate Yoon Seok-yeol continues to emphasize that candidate Lee Jae-myung is the 'body' as the design and approval authority for the Daejang-dong project.

Today (23rd), Won Hee-ryong, head of the policy division of the fleet headquarters, came out as a striker.

This is how I got the Democratic Party's interpretation of the transcript's 'Lee Jae-myung Gate' back.

"In the Democratic Party, it means 'a trial of not guilty', and Rep. Kang Hoon-sik said '(Lee) is blocking the Daejang-dong gate', but both are original and far from existing Wikipedia, Korean dictionary, or common sense dictionary. It is an interpretation.” He also actively defended against the remarks of Mr. Kim Man-bae in the transcript that candidate Lee Jae-myung quotes in TV debates, etc.

'Daejang-dong suspicion' that came to the fore again

As candidate Lee Jae-myung, who was somewhat defensive, switched to offensive mode, he is the one who enters the center of the presidential election, where the 'Daejang-dong suspicion' is heading to the final stage.

Candidate Jae-myung Lee's side goes beyond removing the frame of 'Daejang-dong suspicion' and counterattacks with 'Yun Seok-yeol Gate'. I'm taking it out all the time.

Candidate Seok-Yeol Yoon's side is pushing harder on the existing claim that Candidate Jae-Myeong Lee is the body that designed the project.

The press conference with the son of the late Kim Moon-gi seems to be related to that strategy.

The reason why the reins of the offensive is strongly tightened is because it is judged that there is nothing bad about Yoon Seok-yeol as the suspicion of Dae Jang-dong rises to the forefront of the presidential election.

With more than 170,000 new confirmed cases of Corona, applications for and payment of secondary quarantine support for small businesses affected by the quarantine measures have started.

This is a picture of the information on the quarantine support fund placed at the Seoul Central Center of the Seoul Small Business Market Promotion Agency.