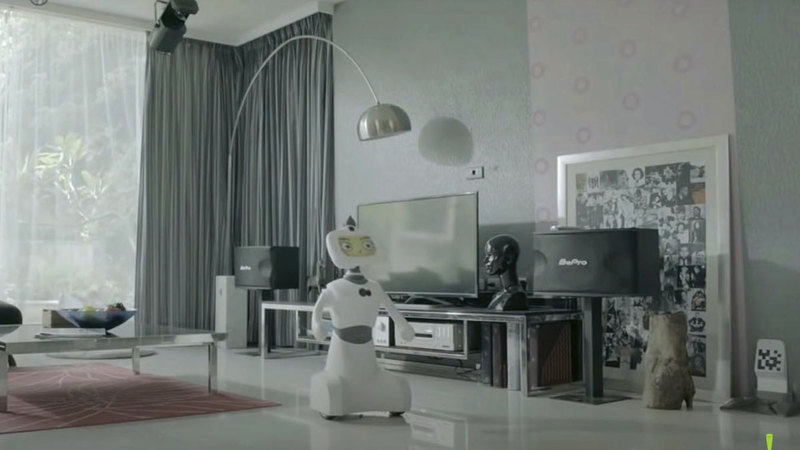 During their participation in UMEX and SimTEX 2022, experts in the field of artificial intelligence and unmanned systems expected that the use of artificial intelligence-powered robots would expand in commercial and civil life in the future, and that it would become present in every home, to help humans in affairs. life, and in performing household chores, such as sweeping, cleaning, washing dishes, guarding and other tasks that may be assigned to them.

Several commercial websites currently offer artificial intelligence robots for sale, to help housewives in household chores, their prices range between 500 and 2000 dollars, and they can be programmed to perform several tasks, and at certain times, such as cleaning pet waste, dust on carpets and hard floor surfaces. .

The tasks of the robots that can be implemented in homes vary, some of which are used to teach children and answer their questions, and others help parents monitor their children at home, and follow the house from outside by watching a live broadcast of the house.

The UMEX and SimTEX 2022 exhibitions witnessed the presentation of the latest innovations in unmanned systems and artificial intelligence techniques, including robots, drones and unmanned mechanisms used in the military field, as well as other advanced technical systems in the civilian field.

Speaking at a conference held on the sidelines of the two exhibitions, Professor Lakmal Seneviratni, Director of the Khalifa University Center for Autonomous Robotic Systems, said, “Robots have amazing potential, and we have seen a lot of advances led by artificial intelligence, but we are still at the tip of the iceberg. We are very far from having robots. In every home, the reason for this is that autonomy is very difficult, and we still need a lot of advances, to see robots in every home like self-driving cars.”

He added, "We haven't really changed much in terms of autonomy in every environment, there are things about human-like perception, comprehension and manipulation, and these are active problems that need solutions, and for physical intelligence when you compare robots to nature, like drones to fish, robots usually They are solid and straightforward, while biological systems have a seamless integration of intelligence and physical coordination, and there is potential for development in many areas, and in robotics when it comes to physical intelligence.”

For his part, Professor of Computer Science and Director of the Robotics Institute at Stanford University, USA, Professor Osama Al-Khatib, said, “Robots resulted in many questions about ethics and security, and in the eighties, we had industrial robots that replaced some of the workforce, and it was That's a big challenge, because it was hard for the workforce, now, new robots in the fields bring robots and humans together, and safety becomes more challenging, because we have the remnants of huge robots, and today, we're working on developing robots that are lighter and safer, but it's challenging, Tactile information is needed so that users can make the bots do what they want from them, and then go back to human decisions.”

The Khalifa University of Science and Technology platform presented the Dexter robotics project, which includes model climbing robots at an appropriate economic cost, capable of crawling and climbing vertical surfaces to perform many tasks, with a high payload capacity such as doing painting and excavation work, and the “Hexapod Macro” robot designed in a way that enables it to Transporting heavy loads in rough terrain autonomously.

In a related context, the Tawazun Industrial Complex of the Tawazun Economic Council announced yesterday, on the sidelines of the UMEX exhibition, the launch of a competition for unmanned and unmanned systems in cooperation with Khalifa University of Science and Technology.

The cooperation aims to attract young national talents, professionals, and amateurs to compete in the field of unmanned and unmanned systems.

• Companies working on developing robots that are lighter and safer and do what you want from them.

• Home robots have a variety of tasks. Some are used to educate children, and others are used to monitor them.

The Edge Group concluded its participation in UMEX 2022, after launching a series of its new advanced products in the market.

Edge had the largest attendance at the three-day event.

Showcasing its significant investment in technological innovation and prioritizing artificial intelligence across all of its products and solutions, it revealed its application to the Hunter series of unmanned aerial vehicle squadrons, the Halken 7IS remote-controlled weapon station, and the latest addition to the ADASSI range of vehicles. Unmanned Tactical SCORPIO-B.