More than three hours to convince Casado: "He is out of reality"

Pablo Casado faces his last moments tonight at the head of the Popular Party. Whether it's hours or days is up to him and the barons. The meeting with the leaders... 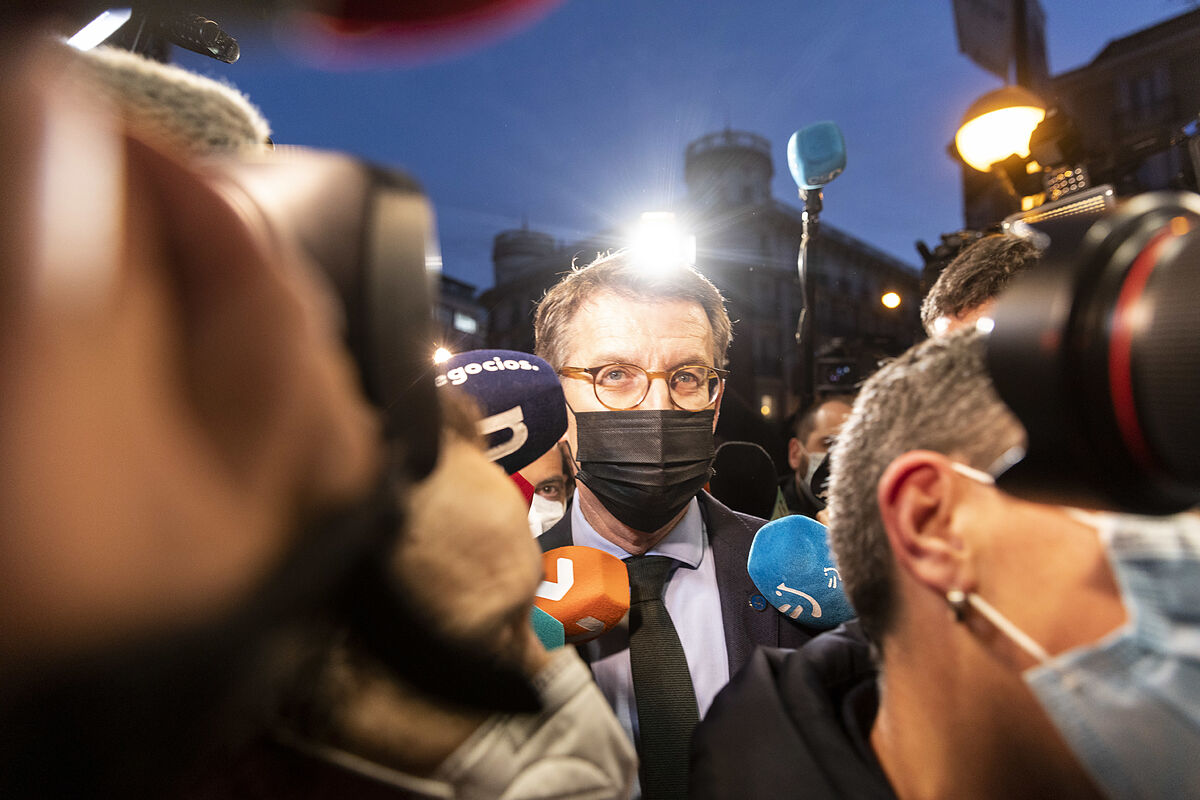 Pablo Casado faces his last moments tonight at the head of the Popular Party.

Whether it's hours or days is up to him and the barons.

The meeting with the territorial leaders began at 9:00 p.m. and is crucial to decide when, not what.

But if Casado expected to get arnica among his, until then, his subordinates, he is not finding it.

Unanimously, each and every one of them demanded his immediate resignation and that he step into a new stage under the command of the president of the

Until 10:45 p.m., the president of the PP listened to all the barons, except for the absent

, who had health impediments.

“No one is betting that it will continue after today [for yesterday],” party sources pointed out.

The support for Alberto Núñez Feijóo was also absolute.

One after another, the territorial leaders reiterated the same opinion: Pablo Casado's mandate was over after the abrupt confrontation with the Madrid president, Isabel Díaz Ayuso.

She did not attend the conclave for not being regional president of the party.

The most anticipated interventions were the last ones, those of the barons with the greatest weight.

Both Juan Manuel Moreno Bonilla, who is facing key elections in

, and Feijóo insisted on the need for Casado to abandon all organic positions.

Feijóo had gone to the Genoa headquarters an hour before the start of the appointment.

“I come because he has called me my national president,” he assured, referring to Casado.

At midnight, the content of this conversation had not transpired and Pablo Casado had not given his arm to twist.

"He is like out of reality," said an assistant.

National Board of Directors

Because that is natural and there is no need for the barons to "scoff" at their end.

“Why do you have to announce your resignation today and not in the speech of the National Board of Directors, which is where you should do it?”, they ask in their surroundings, aware that there is “no doubt” that they are going to resign.

And since it is clear, “better on the Board”.

Among the barons there were doubts at first about whether to give in to the times.

Most of the regional leaders consulted before the meeting believed that it was necessary to convey to their president that their end had come.

That he verbalize it to stop "the bleeding", and that he make it effective on Tuesday.

he deserves to go well: what less! », they insist on their surroundings.

"Today [for yesterday] he has to resign, everything else is an unnecessary hell for him," synthesizes one of the five ruling barons.

"He can do it before eight o'clock or let us know at the meeting," he settled.

«And already agree on his role during these days until the congress;

he has no other way out », he added

"Prolonging the show is a mistake," complained another president.

Another of the oldest barons makes this diagnosis: «I understand that today [Wednesday] I should say that he is leaving.

The first, for him.

His situation must be an internal torment.

That's how I see it.

But slow motion is a mistake."

But not all the regional presidents of the PP believe that he should abruptly announce his goodbye.

"I think we should listen to him.

Not only for humanity, but for justice.

What less than listening to him », explained one of the most relevant.

“After the resignation of Teo, one option is that today the pack is less hungry and the dignified exit triumphs somewhat more based on party image,” says a leader of the Valencian PP.

"There have already been too many resignations," they conceded in the Junta de Andalucía.

"This should all have ended days ago.

We must help President Casado at this time.

One thing is that he is not the best bet for the future given the emotional rupture that exists with the militancy and another is that he is not a party colleague whom we respect and whom we are going to help on this path », they pointed out in the PP from Galicia.

Once in the meeting, the opinions were unanimous.

He had to go now.

Pablo Casado wants to say goodbye in his own way.

In the morning, he entered the Hemicycle at the last minute, when the bells for the start of the session were already ringing and while everyone was wondering if this would be his last face-to-face confrontation with the President of the Government.

Pedro Sánchez had not arrived in advance of the duel either.

He booked himself to the end as if prolonging the wait.

He wasn't smiling either.

Casado opened the face-to-face meeting by recalling the "courage and courage" of the Spanish in building democracy, overcoming threats such as 23-F, which marks 41 years today, as well as the ability to live in "concord and reconciliation in the face of resentment and anger.

The still leader of the opposition insisted that the duty is to "return tranquility, hope and illusion" to the citizens and urged the Government to commit itself "without pacts with those who do not believe in Spain or alliances with the who attacked her."

“I hope”, he said, “that the Government puts itself at the service of the general interest with respect to the institutions, to national unity and to the equality of all Spaniards”.

Casado said he understood politics "from the defense of principles and values, from respect for opponents and dedication to colleagues to serve Spain."

He didn't ask any questions.

His deputies rose to give him a long standing ovation.

As in a farewell.

And that has been.

Sanchez wished him the best.