“The only way to protect people”: how Russia’s recognition of the DPR and LPR can affect the international situation

Both chambers of the Russian Parliament unanimously ratified the treaties of friendship, cooperation and mutual assistance with the DNR and LNR. These agreements were signed on February 21 by Russian President Vladimir Putin and the heads of the people's republics Denis Pushilin and Leonid Pasechnik. They provide for the provision of direct military assistance to the republics and the development of all-round economic cooperation. Kiev does not rule out a break in diplomatic relations with Moscow, and the US and the EU intend to introduce new sanctions. According to experts, the economic and military measures that the West will take against the Russian Federation and the people's republics will be limited. 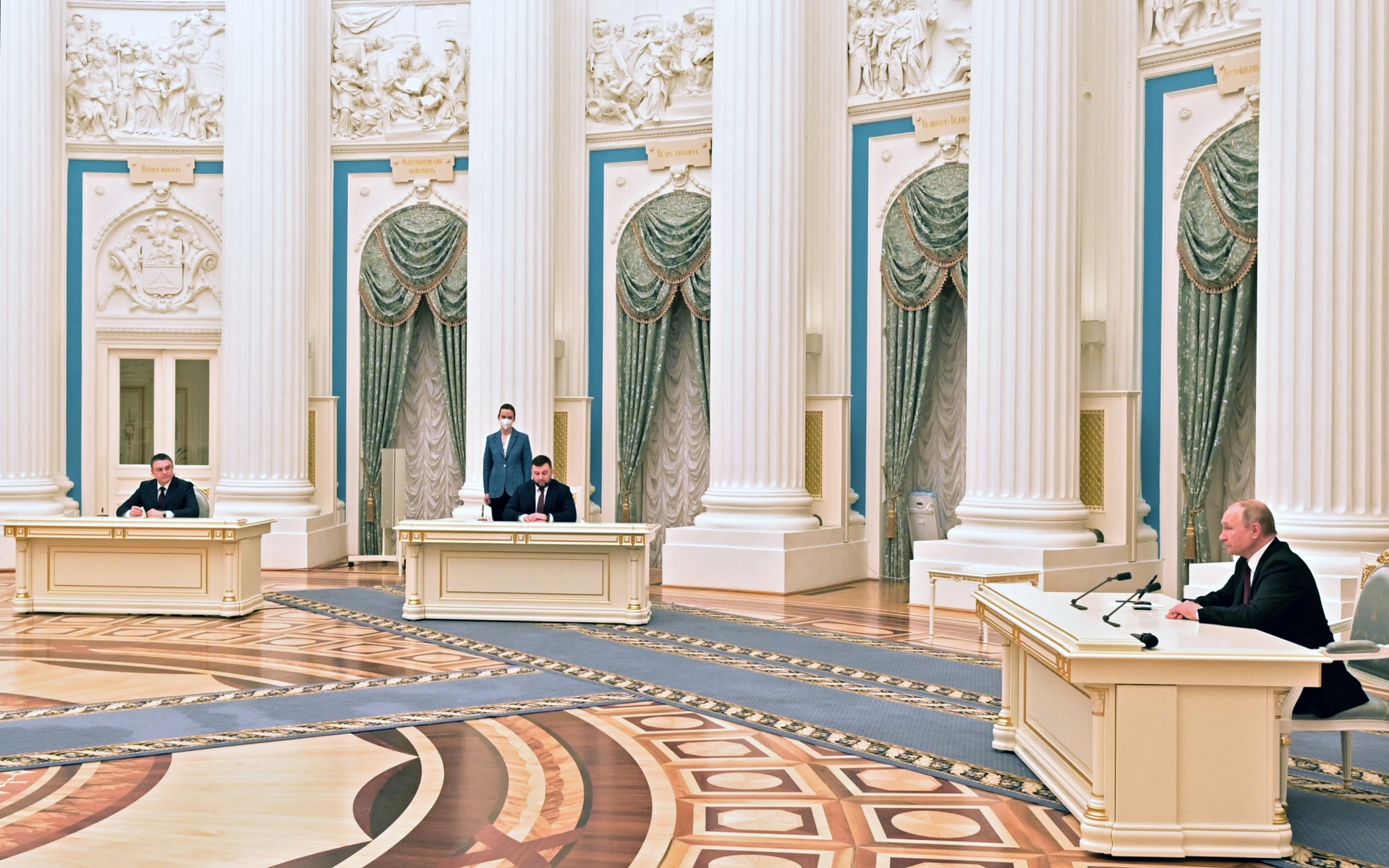 The State Duma and the Federation Council ratified the treaties on friendship, cooperation and mutual assistance, which were signed on February 21 by Russian President Vladimir Putin, heads of the DPR and LPR Denis Pushilin and Leonid Pasechnik.

This decision was unanimously adopted by both chambers of the Russian parliament.

Earlier, the ratification of agreements with Moscow was also approved by the deputies of the People's Councils of the Republics of Donbass.

“The decision to ratify the treaties is the only way to protect people, stop the fratricidal war, prevent a humanitarian catastrophe, bring peace,” State Duma speaker Vyacheslav Volodin commented on the voting results on his Telegram channel.

In a RT commentary, Vladimir Dzhabarov, First Deputy Head of the Federation Council Committee on International Affairs, called the decision to ratify the treaties with Donetsk and Lugansk fair.

“I think this (ratification of agreements. -

) will protect our loved ones and friends from the genocide that Ukraine has unleashed against these regions,” Dzhabarov emphasized.

The texts of the ratified treaties are almost identical and are designed for 10 years with automatic renewal.

They provide for mutual military assistance, proclaim the principle of respect for territorial integrity and readiness for all-round economic cooperation.

During a press conference, Vladimir Putin commented on the issue of the borders of the republics.

“To what extent will we recognize these republics?

And the Constitution spells out the borders within the Donetsk and Lugansk regions at the time when they were part of Ukraine,” Putin said.

At the same time, the President of the Russian Federation expressed the hope that all controversial points on this issue would be resolved during the negotiations between the LPR and the DPR with Ukraine.

The Constitutions of the DPR and LPR state that the territories of the republics are determined by the borders that existed on the day of their formation.

However, they may be changed by decisions of the People's Councils.

Recall that on May 11, 2014, a referendum on independence from Kiev was held in different districts of Donetsk and Luhansk regions.

The next day, representatives of the militia proclaimed the state sovereignty of the people's republics.

Kiev and Western countries did not recognize the results of the plebiscites.

Putin announced the recognition of the DPR and LPR in a video message on the evening of February 21, after the respective requests of Pushilin and Pasechnik.

The Russian leader stated that the situation in the Donbass "has again acquired a critical, acute character."

At the same time, as Putin emphasized, in recent years Kiev has been consistently sabotaging the implementation of the Minsk agreements and preparing a military scenario.

In addition, the head of state demanded "from those who seized and hold power in Kiev" to immediately stop hostilities.

On the same day, the President of the Russian Federation, in the presence of Pushilin and Pasechnik, signed decrees recognizing the DPR and LPR as independent states.

Putin also instructed the Russian Ministry of Defense to ensure the maintenance of peace in the territories of the people's republics, and the Foreign Ministry to launch negotiations on establishing diplomatic relations with Donetsk and Lugansk.

On February 22, the Federation Council gave its consent to Russian President Vladimir Putin on the use of the army outside the country in connection with the situation in the Donbass.

The corresponding resolution was adopted by the senators at an extraordinary meeting of the upper house of parliament.

In Kiev, they rejected the legitimacy and legitimacy of recognizing the uncontrolled territories.

In his address following the emergency meeting of the National Security and Defense Council, Ukrainian leader Volodymyr Zelensky said that the country's borders would remain within internationally recognized limits.

He regarded Moscow's actions as a violation of the independence, sovereignty and territorial integrity of Ukraine.

Zelensky also added that Kiev is committed to the diplomatic settlement of the conflict.

Meanwhile, the authorities of the people's republics report on the ongoing shelling of settlements by the Armed Forces of Ukraine.

In particular, as Eduard Basurin, deputy head of the People's Militia Department of the DPR, told reporters, from 3:00 on February 21 to 3:00 on February 22, about 600 different shells were fired at the republic.

In an interview with RT, Andrey Suzdaltsev, Deputy Dean of the Faculty of World Economy and World Politics at the Higher School of Economics, expressed confidence that the situation on the line of contact should stabilize after the implementation of Putin's order, which was given to the Armed Forces of the Russian Federation.

The expert expects peace to return to Donbass in the near future.

“First of all, Russia is concerned about ensuring the security of the population of the independent republics.

Most likely, a number of additional documents will be signed that regulate the presence of parts of the Russian army in the DPR and LPR.

As in the situation with the Crimea in 2014, for the Armed Forces of Ukraine this is an inevitable defeat and exile, ”Andrei Suzdaltsev, deputy dean of the Faculty of World Economy and International Affairs at the National Research University Higher School of Economics, explained in an interview with RT.

According to the expert, the recognition of the DPR and LPR means not only the provision of military patronage by Russia.

Under the circumstances, Moscow will certainly provide humanitarian and economic assistance, as well as help restore infrastructure facilities and residential buildings destroyed by the latest shelling of the Armed Forces of Ukraine.

“Sanctions will not be a surprise”

Western states predictably opposed Moscow's recognition of the DPR and LPR, regarding this step as an escalation of the conflict and a violation of the territorial integrity of Ukraine.

The European External Action Service published a statement in which it called on foreign states not to recognize the independence of the republics of Donbass.

To date, Syria has announced its readiness to recognize the sovereignty of the DPR and LPR following the Russian Federation.

Soon, US President Joe Biden will sign a decree allowing to approve restrictions against persons and organizations engaged in economic cooperation with the people's republics.

This was stated by the press secretary of the State Department Jen Psaki.

“I want to be clear: these measures are taken separately and complement the operational tough economic measures that we are preparing in coordination with allies and partners in the event of further Russian invasion of Ukraine.

We continue close consultations with allies and partners, including Ukraine, on further steps and the ongoing escalation from Russia (tension. -

) along the border with Ukraine, ”the State Department press service quotes Psaki.

The United Kingdom also announced the decision to impose sanctions.

Speaking on February 22 in parliament, Prime Minister of the United Kingdom Boris Johnson announced that five Russian banks and three businessmen from Russia would fall under the restrictions of London: Gennady Timchenko, Boris and Igor Rotenberg.

The European Union also promised to introduce a new package of sanctions.

One of the leaders of the EU - Germany - said that the recognition of the DPR and LPR will not remain without consequences.

According to him, "this is a technical but necessary administrative and legal step."

The Russian authorities emphasize that the negative reaction of the West in the form of the adoption of new restrictive measures was expected.

So, on February 21, at a meeting of the Russian Security Council, Prime Minister Mikhail Mishustin noted that Moscow is economically ready for the risks that will be created by the next package of sanctions measures.

He promised that the authorities would do "everything necessary to ensure the economic development and well-being of our people."

In a conversation with RT, Sergey Ermakov, an expert at the RISS Research Coordination Center, expressed the opinion that new Western restrictions would not have a serious negative impact on the Russian economy and industry.

“A lot of various restrictions have already been introduced against Russia, new sanctions will obviously not be a surprise for Moscow.

In addition, it should be understood that sanctions pressure on the Russian Federation has reasonable limits.

The point is that the EU and the US are unlikely to take measures that will harm themselves and their allies, ”Ermakov argues.

According to Andrei Suzdaltsev, the next restrictions of the West will mainly affect the people's republics and officials who contributed to the process of recognizing the DPR and LPR.

The expert doubts that the sanctions could lead to the disconnection of the Russian Federation from the SWIFT interbank information exchange system or the closure of the Nord Stream 2 project.

“In principle, the West made it clear that truly serious measures are possible only when major battles begin between the Armed Forces of Ukraine and the Russian army.

This scenario is unlikely, and the effect of sanctions against the republics and those who do business with them will be minimal, because the trade and economic contacts of the DPR and LPR are almost completely closed to the Russian Federation, ”Suzdaltsev explained.

Experts believe that another measure of the West in response to the recognition of the people's republics will be the expansion of NATO's military infrastructure.

However, the scale of this process will be constrained by the need to build up US military efforts in the “Chinese direction”.

“Washington is not going to fight with the Russian Federation.

Moreover, the Americans cannot afford to move large numbers of troops into Eastern Europe because of the growing desire to "contain" the PRC.

Most likely, the United States, as under Donald Trump, will begin to demand tougher demands from Europeans to increase their own combat readiness, ”Yermakov believes.

Along with this, the interlocutor of RT is sure that the West will not refuse dialogue with Moscow.

As you know, in the near future, with the mediation of French President Emmanuel Macron, negotiations between Putin and Biden should take place.

The agenda of the summit will be determined following the meeting between Russian Foreign Minister Sergei Lavrov and US Secretary of State Anthony Blinken, which is scheduled for February 24.

From the point of view of Suzdaltsev, it is Kiev that is more interested in the dialogue between the West and Moscow.

According to the expert, after the escalation of violence in the Donbass, the leadership of the Russian Federation will not directly interact with the Ukrainian authorities.

For Kiev, communication with Russia will be through the US and EU countries.

In addition, at a briefing following a meeting with Estonian President Alar Karis, Zelensky already admitted the possibility of breaking off diplomatic relations with the Russian Federation.

According to the Ukrainian Foreign Ministry, Charge d'Affaires of Ukraine in Russia Vasily Pokotilo has been recalled for consultations.

According to Suzdaltsev, in the current situation, it is critically important for the Ukrainian leader to create an information background within the country, in which Russia's recognition of the DPR and LPR will not be perceived as his personal political defeat.

“In the current situation, Zelensky does not want to pass for the president who finally lost the Donbass.

But, as I think, reasonable people in Ukraine understand that the people's republics were lost due to the fact that Zelensky refused to implement Minsk-2 and was not actually going to return the uncontrolled territories, at least peacefully, ”summed up Suzdaltsev.